After three months to get acquainted with the new City Hall and mayor, Prague residents still remain skeptical and mistrutful 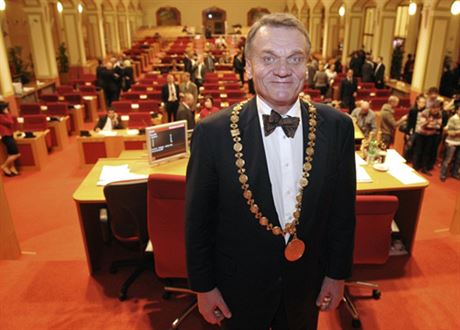 Svoboda was not the people’s choice for Prague mayor | foto: © ČTK, Česká pozice

The “grand coalition” of the Civic Democrats (ODS) and Social Democrats (ČSSD) that is running City Hall has not yet managed to gain the support a majority of Prague residents, according to a February poll by the Center for Analysis and Empirical Studies (SANEP). The coalition has, however, picked up a significant amount of support since a similar poll in December 2010.

Elections for City Hall were held in Oct. 15–16, 2010, and saw center-right party TOP 09 win the most seats after campaigning on a platform that promised to increase transparency and end corruption. The upstart party’s mayoral candidate in Prague, former Czech National Bank (ČNB) Governor Zdeněk Tůma, was swept to what turned out to be a hollow victory: On Nov. 16, the center-right ODS and left-wing ČSSD signed a coalition agreement that gave the mayoral post to Bohuslav Svoboda (ODS).

“The Prague municipal coalition of Civic and Social Democrats, even after three months of operation, faces skepticism from most people in the capital. Prague residents have failed to get on the side of the current Mayor Bohuslav Svoboda, whom most Praguers don’t trust and whose performance most Praguers also disapprove of,” SANEP said.

This is an improvement, however, over results from a SANEP poll conducted in December 2010, which showed that 78.9 percent of Praguers mistrusted the coalition, while only 16 percent trusted it.

The February 2011 poll also showed that a strong majority would welcome a decision by the Constitutional Court that would nullify the elections and cause them to be repeated. Some 60.8 percent agreed or rather agreed with the idea, while just over a quarter — 25.7 percent — opposed the notion to any degree.

When it comes to the mayor specifically, he also remains unpopular but has gained in support. “Dissatisfaction with Mayor Bohuslav Svoboda, is currently at an aggregate 48.6 percent of respondents. … Compared to December last year, when 71.8 percent of respondents were not satisfied with new Prague mayor, he has significantly mended his ways. But we can still we say that Prague residents are still not on his side,” SANEP said. In the February poll, 33.8 percent were satisfied, while 22.1 percent were satisfied in December.

Svoboda also scores poorly on trust, with 55.4 percent of Praguers not trusting him, while 35.2 percent do. “Even here, however,  compared to December last year, when the new Prague mayor was not trusted by 69.4 percent of Prague, there is a marked improvement in his position in the eyes of the population of Prague,” SANEP said.