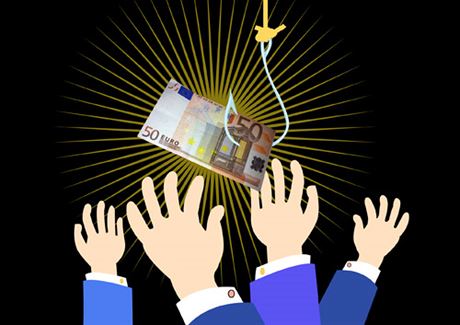 The biggest problem in the country is corruption among ministries, police and the judiciary, a poll by the Center for Analysis and Empirical Studies (SANEP) showed. Some 31.5 percent named corruption as the key problem while politicians lusting after money and power was seen as the second-biggest problem, named by 18.2 percent, followed by 11.8 percent citing the ineffectiveness of center-right coalition government. Other issues such as the critical state of the budget, government reforms, poor law enforcement and inflation each had less than 10 percent.

“The phenomenon of corruption, which is present in the political, judiciary and police sectors, seriously undermines society’s confidence in state institutions and the functioning of the legal principles of a democratic society,” SANEP said in its report. A majority of people — 56.6 percent saying “yes” and 26 percent saying “rather yes”— said that extensive corruption threatened democracy in the Czech Republic.

“This result reflects that the resolution of major lawsuits with undertones of corruption in the country is an exception. … The public perception of corruption and its impact on democracy undoubtedly plays a role that is definitely disappointing voters, who in last year’s general elections voted for parties that guaranteed to start the fight against corruption and the establish changes in political culture,” SANEP said. A large majority, altogether 73.5 percent, disagreed that the Czech Republic was an advanced democracy.

One issue that concerned respondents was abuse of power regarding the protection of privacy, which has been making headlines due to phones in the President’s Office and other state institutions being taped by detective Marian Hudec. Most of the people under surveillance by him had close connections to President Václav Klaus.

Some 73.5 percent say that privacy is not sufficiently protected in the Czech Republic, and a further 89.2 percent say is possible to buy information about every citizen in the country. Regarding this specific case, a minority of people — 48.4 percent —said that Hudec’s actions could ultimately threaten democracy. Some 64.3 percent were concerned about his actions, and 63.5 percent said he should be punished along with the judges who authorized the wiretaps.

A separate survey of economic conditions in the CEE region released by the Czech-German Chamber of Commerce (ČNOPK) showed that German investors were quite concerned about corruption and criminal practices in the Czech Republic. Out of 16 CEE countries, the Czech Republic was the fourth from the bottom, scoring 4.23 on a scale of one to five, with five being very dissatisfied. The only countries to score lower were Romania at 4.31, Bulgaria at 4.52 and Kosovo at 4.64. Albania came ahead of the Czech Republic, at 4.09. The average was 3.75, with Estonia coming out on top at 2.59.