Director Agnieszka Holland, whose Holocaust drama ‘In Darkness’ is an Oscar contender, will tackle the story of Czech icon Jan Palach 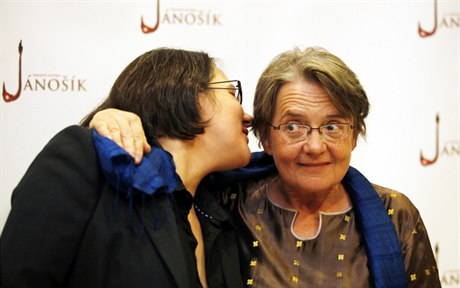 Agnieszka Holland, right, and her daughter Kasia Adamik (who is also a director), at the September 2009 Czech premiere of her historical movie ‘Jánošík’ in Prague foto: © ČTK, Česká pozice 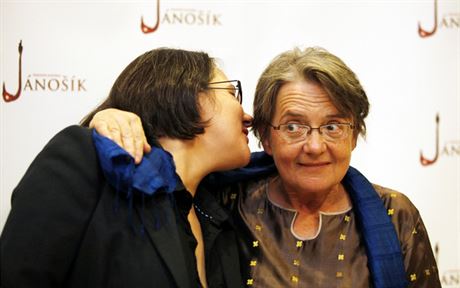 This Thursday marks the anniversary of the death of Jan Palach, the 20-year-old Charles University law student who four decades ago set himself on fire in a bid to rouse Czechoslovakia from the apathy that had set into society in the wake of the 1968 Warsaw Pact invasion sent to crush the reforms of the Prague Spring.

Palach died of his injuries three days after his act of self-immolation. His funeral in Prague — attended by an estimated 200,000 people — was an outpouring of grief and anger at the occupation of Czechoslovakia by the Soviet forces. In the days and months to come, many others ignored Palach’s deathbed exhortations that others not follow in his footsteps.

(At least seven people died from their burns, including another student, 18-year-old Jan Zajíc, who burned himself to death on the spot on Wenceslas Square, and Evžen Plocek, a 41-year-old who had been a delegate at an illegal congress of the Czechoslovak Communist Party which supported the reforms, who self-immolated in Jihlava, in April 1969.)

“He died because he wanted to shout as loud as possible. He wanted us to realize what was happening to us, to see what we were really doing, and to hear what we were saying in those times of reputedly inevitable concessions, “reasonable” compromises, and hopefully clever tactical ploys. We started forgetting that something has to resist even the greatest pressure, something fundamental that cannot be bought or sold, but that is absolutely essential for maintaining our human dignity.” — From Charter 77 ahead on the 20th anniversary of Jan Palach’s self-immolation in January 1989.

On Oct. 28 1991, President Václav Havel bestowed Jan Palach and Jan Zajíc in memoriam the Order of Tomáš Garrigue Masaryk, 1st rank, for their outstanding contribution to the development of democracy and human rights. In 2000, an extraordinary monument to them  was built in front of the National Museum in Prague.

A number of public squares and schools have also been named in honor of the courageous law student, one of a small group of volunteers (the existence and extent of which remains under debate), who, as Palach put it in his final letter, were “ready to burn themselves to death for our cause” — to rouse the Czech and Slovak people from “the brink of hopelessness” to action. After the Velvet Revolution, Palach and Zajíc were commemorated in Prague by a bronze cross embedded outside the National Museum.

And yet the compelling story of the short life of Jan Palach — the martyr of the Czech nation — has never been made into a feature film.

Enter Agnieszka Holland, one of Poland’s most prominent TV and film directors — who was a student at Prague’s famous Film and TV School of the Academy of Performing Arts (FAMU) during the Prague Spring and the subsequent “normalization” period that followed it. In collaboration with HBO, Holland this March is to begin shooting a three-part miniseries about Palach. According to the Czech daily Lidové noviny, she will reveal further details about the project ahead of a student debate at Charles University in Prague later this week. ‘In 1969 I was a student of the film school in Prague. [All] that the script covers, I was very engaged in.’

“In 1969 I was a student of the film school in Prague. Everything that the script covers, I was very engaged in. Therefore, it is a very important story for me because of personal reasons as well,” Holland said in an interview with Polish Radio. “I am very happy that the young Czech film professionals are interested in this very significant event and time period. Both the screenwriter and the producer [like Palach at his death] are twenty years old.”

It is not her first foray into a figure central to Czechoslovak history. Holland recently directed “Jánošík: A True Story” (2009), a film about a Slovak national hero, the mythical Robin Hood-like highwayman Juraj Jánošík, whose status as a symbol of resistance to oppression was reinforced when poems about him became part of the Slovak and Czech secondary and high school literature curriculum.

Unlike in Palach’s case, numerous films — Slovak, Czech and even earlier Polish efforts, made before and after World War II — have propagated Jánošík’s modern legend in the 20th century. The Palach miniseries, commissioned by HBO Central Europe and based on a script by Štěpán Hulík, mainly covers the 12 months after the law student’s death.

Born in Warsaw, to a Jewish father and Catholic mother, Holland’s paternal grandparents were killed in the Jewish ghetto. Her mother fought in the 1944 Warsaw Uprising and was a member of the Polish Underground. She directed three major films in Poland, including “Fever” (Gorączka, 1980) and “A Lonely Woman” (Kobieta samotna, 1981), before emigrating to France, shortly before martial law was declared in Poland in December 1981.

Holland, who graduated from FAMU in 1971, won the International Critics Prize at the 1980 Cannes Film Festival for her first major film, “Provincial Actors” (Aktorzy prowincjonalni), a story of tense backstage relations within a small-town theater company that served as an allegory for Poland’s political situation at the time. She has since mainly taken on historical subjects, mainly set during the Second World War.

Although Holland received an Academy Award nomination for Best Foreign Language Film for her 1985 film “Angry Harvest,” a German production about a Jewish woman on the run in World War II, her best-known feature is the 1991 film “Europa Europa,” based on the biography of Solomon Perel, a Jewish teenager who fled Germany for Poland following Kristallnacht in 1938 and to the Soviet-occupied section of the country following the outbreak of World War II.

Captured by the Germans during the invasion of Russia in 1941, Perel convinces a Nazi officer he is German and finds himself enrolled in the Hitler Youth.

Holland is currently on the faculty at Brooklyn College, City University of New York, as filmmaker-in-residence. Her Holocaust drama “In Darkness” is Poland’s submission for this year’s Academy Awards.

“In Darkness” is based on the true story of Leopold Socha, a sewer worker and petty thief in Lvov, a Nazi-occupied city in Poland, who one day encounters a group of Jews trying to escape the liquidation of the ghetto. He hides them — for money — in the labyrinth of the town’s sewers but forms an unlikely alliance with the men, women and children, who spent some 14 months literally underground.