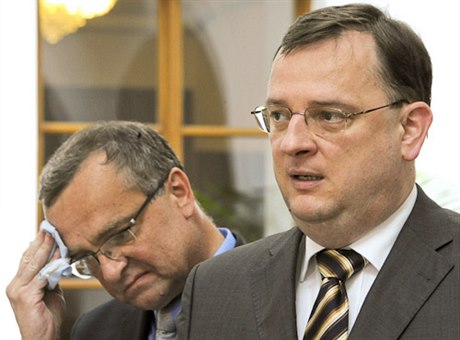 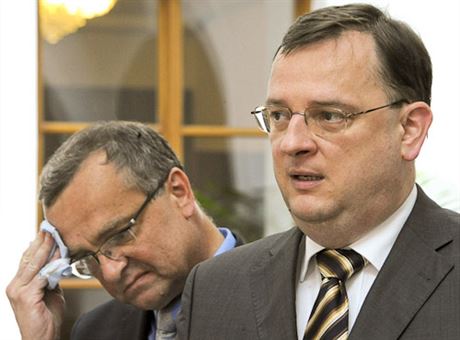 Offers submitted last week by three consortiums to clean up environmental pollution caused under the communist regime prior to 1989, remain sealed in envelopes in a safe in the finance ministry. In an interview with the daily Hospodářské noviny (HN) this past Friday, Prime Minister Petr Nečas (Civic Democrats, ODS) said he wants to see the eco-tender scrapped, even though he doesn’t know the prices put forward in the offers.

“The legitimate solution is not to choose a winner, and thus simply terminate the tender. I cannot imagine that a government under my leadership could be linked to a case that involves dozens of billions of crowns and about which there are suspicions of corruption,” Nečas told HN.

One of the conditions of the eco-tender is that the contract between the winning bidder and the state, represented by the Ministry of Finance, must be approved by the government. Therefore, there are no legal obstacles to Nečas’ decision and the three bidders (consortiums led by It is up to Kalousek to decide how the commission’s findings will be presented to the governmentGeosan Group, Marius Pedersen Engineering and Environmental Services), should be prepared for such an outcome.

As head of the ministry, Finance Minister Miroslav Kalousek (TOP 09) is playing the role of tender issuer and has proposed to the government a commission that will evaluate the three bids submitted. It is up to Kalousek to decide how the commission’s findings will be presented to the government, i.e., whether just the results of the commission’s evaluation will be presented for further appraisal or whether it will propose a recommended winner.

It has been heard from government circles that the consultancy Deloitte Advisory has been commissioned to conduct an appraisal of the finances of the three bidders while Ernst & Young has been employed to conduct an assessment of the Deloitte Advisory report that should be opened at a government meeting. This should provide for a slightly smoother course of developments and may prevent Kalousek from authoritatively backing a specific bidder.

“We must precede so as to avoid arbitration. A legitimate solution would be simply not to select a winner. I don’t want to issue exaggerated statements, but from the beginning this tender has raised a huge number of question marks. First of all, limiting the number of bidders to just three means textbook [conditions for] negotiations towards [forming] a cartel agreement. Secondly, the lower the number of bidders, the higher the price. And thirdly, it’s not good to have everything tied up in one large difficult-to-control package,” Nečas told HN, explaining his reservations about the tender.

Last December, Czech Position reported on one of the legal analysis of the eco-tender ordered by Nečas, which contains detailed instructions for how to cancel the tender at each stage of its progression. This logically raises questions as to why the The tender documentation did not — and still doesn’t — contain precisely defined technical conditions of the contract. government hasn’t acted on the advice it spells out.

Our article pointed out two weak points of the legal study. The eco-tender is based upon two laws: the law on public tenders and the so-called law on concessions. “Neither the legal provision valid at the time of the announcement of the tender [in November 2008] nor the valid amendment endow the public issuer with the right to cancel the [tender] submission process,” the legal assessment reads.

At the turn of the year, the massive eco-tender was at the stage of assessing the qualifications of the bidders. And prior to the stage of the tender when the envelopes containing the offers are opened, the legal study said there were two, not-very-realistic options.

The first was to cancel the tender on the grounds “reasons of exceptional deference which emerged after the announcement of the tender,” but the law does not in any way define such potential reasons. And this does not mean that the government could somehow “think up” such reasons.

The legal study states that such an approach would be possible if the cabinet were to identify “such shortcomings in the issuing documentation which prevent legal issue of the contracts, and which could not be sufficiently corrected.” Shortcomings that could fulfill these criteria could include, for instance, that the tender documentation not including accurately defined technical parameters, or not adequately describing the state of the object of the tender.

“In any case, the mitigating circumstances must exist objectively and be demonstrable,” the author of the legal study advised. It’s also certain that the bidders would have used all legal measures possible to oppose such a move by the government.

However, the tender documentation did not — and still doesn’t contain — precisely defined technical conditions of the contract. If this circumstance were sufficient for the cancellation, looking at the tender now it’s apparent that the government could have backed out of the tender pretty much at any stage. Nevertheless, in order to do this the government would have to commission another legal analysis clearly pointing to the absence of defined technical conditions.

In the December 2010 article, Czech Position also pointed out another option mentioned in the legal study: to cancel the tender on the grounds of a “fundamental change of circumstance.” Put simply this would require the government to state a reason for halting the tender which The political situation surrounding the eco-tender has reached the stage that begs the question: could the tender cause the downfall of the coalition government?it didn’t itself cause and which it could not have foreseen. “In specialist literature a commonly given example is that the issuer did not receive the promised grant or subsidy with which it intended to finance the public tender,” the legal study says. However, “changes on the market” that would probably affect the economics of the tender would not in itself count as a mitigating reason to cancel the tender.

The three firms that submitted bids did so on time, meaning that the government could not cancel the tender on the grounds that no bids were submitted.

According to the authors of the legal study, the tender is now at the stage when “from the legal point of view, Prime Minister Nečas and his ministers will have their hands freest, but will face most pressure from lobbyists towards the culmination when the bidders’ tenders will be known and have been evaluated. This is because the concession law simply enables the government not to approve the contract with the winner of the eco-tender, and at the same time it does not have to provide an explanation for such a step. The question is whether such an option is passable in practice,” the report states.

At the halfway point of the course of the eco-tender under Jan Fischer’s interim government, then-finance minister Eduard Janota (unaffiliated), put a motion to parliament calling on the prime minister to cancel the eco-tender being pushed ahead by Kalousek.

The motion was passed by the lower house on November 6, 2009. At the time, Janota commissioned legal case studies of the tender from two law firms, Brož & partner, and Weil, Gotshal & Manges. The main difference in the conclusions of those studies and that cited above commissioned by Nečas is they concluded that nothing could be done until the envelopes containing the offers are opened. ‘I don’t want my government to have to its name something like the Gripens, Mostecká uhelná, OKD or the Pandurs.’

The political situation surrounding the eco-tender has reached the stage that begs the question: could the tender cause the downfall of the coalition government? “It could fall due to anything of fundamental importance. I cannot imagine that a government under my leadership could be linked to a case which involves dozens of billions of crowns and about which there are suspicions of corruption. I don’t want my government to have to its name something like the Gripens [fighter planes], Mostecká uhelná [coal mining company], OKD [mining company] or the Pandurs [armored personnel carriers]. Here, I’m speaking generally and not about the eco-tender specifically,” Nečas told HN, referring to prominent corruption scandals of recent years.

The tender commission is due to open the offers on Tuesday, Sept. 13 and should recommend a winner within weeks. The ensuing debate of the commission’s findings by the cabinet looks likely to be divisive — perhaps fatally so for the fragile coalition government.