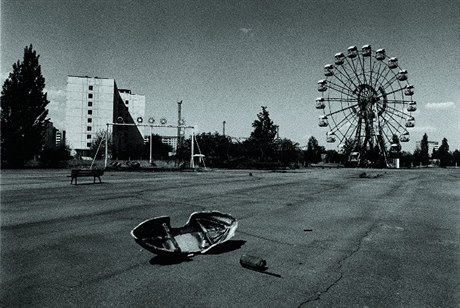 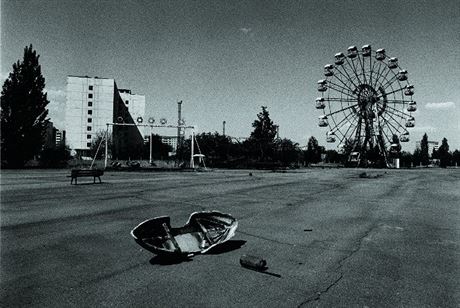 The photography exhibition Antonín Kratochvíl & Workshop – Chernobyl at the Mánes Exhibition Hall on the occasion of the 25th anniversary of the nuclear disaster was supposed to be about the past and its tragic, lingering effects for the victims and inhabitants of this devastated part of the former Soviet Union — and now part of Ukraine. The nuclear catstrophe at Fukushima changed that though, giving the pictures on display a frightening contemporary relevance as well as a charitable cause to support.

While Fukushima has resulted in some harsh criticism of the way the Japanese government dealt with the crisis, Milan Jaroš, the exhibition’s co-curator together with Iva Nesvadbová, insists that the issue of the Soviet and Czechoslovak communist governments’ shameful mishandling of the disaster remains highly relevant, partcularly as there are current attempts to minimize the effect and even narrow the death toll down to the 47 workers who died as a direct result of radiation exposure at the plant.

The exhibition has a presentation that reproduces Czechoslovak newspaper headlines from the time the Chernobyl story became public in the Soviet bloc, which give a clear demonstration of the attempt to downplay the significance of what had occurred.

Way of the warrior

Besides the photography on display there is an exhibition of Japanese samurai swords, sword mountings called tsuba, photographs of Japan and assorted art objects. The Japanese word bushido translates as the “way of the warrior,” and Jakub Zeman and Miroslav Matějka of the Bushido (Bušidó) association told Czech Position that they wanted to find a way to give back to the country which has proven so inspiring for them.

Zeman told Czech Position that they arrived in Japan to continue their study of the samurai art a week after the catastrophe, having asked their master whether they should still come during such trying times. Once in Japan they expressed their solidarity with the victims through a calligraphic prayer that can be viewed at Mánes.

Upon returning to the Czech Republic, Zeman says they decided to extend their efforts to provide concrete support to those affected by the earthquake, tsunami and subsequent nuclear disaster, and the proceeds from the exhibition and accompanying events will be devoted to support for Japan.

In June 2010 Kratochvíl held a very different type of photo exhibition at Mánes. Moscow Nights was a racy, vivid display of the Moscow party scene, and interest in the show was extremely high. The anticipation of photographs of Chernobyl, on the other hand, has not produced the same buzz, a fact that does not surprise the photographer one bit.

“The public here, like most places, doesn’t want to hear it. They like to look at naked women. Last year there were 20 newspapers here for the press conference asking stupid questions,” Kratochvíl told Czech Position. “People try to forget. They aren’t interested. And then Fukushima happens.”

The display of the black-and-white photographs is not at all typical. They are printed on long white banners, an idea that Kratochvíl attribtes to the curators. “We didn’t want to make it all art. We wanted to make it more information. It’s not opulent,” he said. “I think if you would try to make art out of this you would miss the point.”

The notion that the pictures are not art does not hold up as you walk around the gallery and see images such as a derelict ferris wheel looming over a rusted, abandoned playground or the photographer’s dim reflection in the glass of a Chernobyl-inspired painting depicting saint-like doctors and nurses across from cloaked, faceless figures.

Other photographs are more documentary, such as those of children with severe birth defects, while many are somewhere in between — arresting images that open a window onto the individual devastation that occurred there. Some of the most haunting photographs show the crumbling relics of Soviet communism, such as a roadside sculpture of peasant youth revealing its widening cracks as it is further encroached on by the surrounding undergrowth.

And this aspect is where Moscow Nights and the current exhibition share another link beyond the same photographer and exhibition space. Some of the Moscow Nights photos touch on the Soviet past by showing Russia’s golden youth partying aboard Stalin’s former yacht turned floating nightclub, the Maxim Gorky — it is a stark contrast between the haves and have-nots, between the place where disastrous decisions are and where their consequences are felt.

Kratochvíl’s engagement in documenting  Chernobyl began in 1996 when he was sent on assignment for the 10th anniversary of the disaster. Since then he has returned both as a photographer and a teacher, leading workshops of international photography students, many of whose works are given a multimedia presentation on a large TV screen at the side of the exhibition.

Kratochvíl says that it was a bonding experience for the students. Afterward, many of them held exhibits in their own countries or presented their work online. The student work is worth sitting through and watching, particularly to see the wide variety of sensibilities brought to bear on the subject.

Most important for Kratochvíl is the exposure provided to Chernobyl, its victims and the issue of the dangers of nuclear power.

“[The students] shared it with people, and that’s what it’s all about — sharing information so people don’t forget because people tend to forget and then Fukushima happens, and something else happens and this stupid thing in South Bohemia will happen,” he says. “With their outdated Russian technology —they’re playing with fire,” he said, referring to the nuclear reactor in Temelín, South Bohemia, which because it was being built when the 1989 revolution came is a mix of Russian and Western technology.

Although Kratochvíl does not appear to be terribly optimistic that public safety will win out over the massive financial interests at stake in adding to Temelín — a tender process is underway to build tow new reactor units — he is more open to hope that the exhibition’s charitable aims will achieve some measure of success.

“It’s for Japan, for charity, so let’s see if Czechs respond. Czechs are unpredictable as a public.”