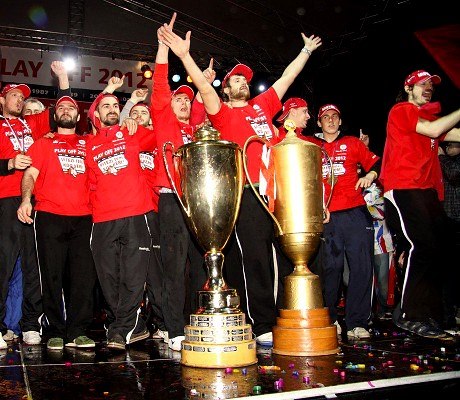 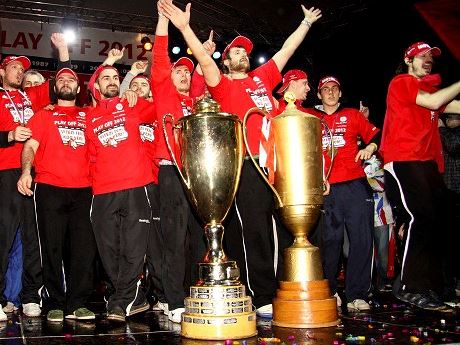 After winning two games on shootouts, ice hockey club Pardubice won game six of the Czech Exraliga playoff final series by five goals to one, putting an end to Kometa Brno’s hopes of their first playoff title in 40 years. The final series produced a total of 42 goals and was memorable not only for the close fought and gripping battles on the ice, but also for the atmosphere created by both sets of fans.

Despite the convincing score line of 5:1 for Pardubice in the series-winning game six, all was square at the beginning of the second period after defenseman Jiří Vašíček had tied the game 46 seconds before the end of the first, shooting the puck passed goal mouth melee screening Pardubice’s goal tender Martin Růžička. Jan Starý had opened the score for Pardubice in the seventh minute with a slap shot from the middle of Brno’s third.

Brno started the second period resolutely with all the play in Pardubice’s defensive zone, but then the club’s defenseman Václav Benák scored his first goal in the playoffs from his team’s first scoring chance of period. Pardubice captain Petr Koukal scored on 30 minutes, then Tomáš Zohorna took advantage of a five on three power play in Pardubice’s favor 35 minutes in. From then on, Brno’s drive waned and belief in a remarkable comeback was visibly not present.

Goal man Růžička was named his team’s star player in game six, having made a series of impressive saves towards the end of the first period and beginning of the second when his team was under intense pressure.

At the other end of the ice Brno’s goal tender, 38 year-old Jiří Trvaj didn’t have his best game of the series; nevertheless, his form in the playoffs was key to Brno progressing unexpectedly to the finals.

The Czech sport press featured a fair share of quips about the fate of the Extraliga playoff champions trophy: both in 2005 and in 2010 the Pardubice team managed to damage the cup. In 2010, when goal tending legend Dominik Hašek after retiring from the NHL captained his hometown club’s championship winning team, the damage was such that the club paid for a replacement.

Thousands of fans packed the main square in Pardubice’s historic center to watch game six on large screens and the vast majority waited until 1:00 am to greet their victorious team back from Brno. Celebrations then continued until the early hours.

“I’m really pleasantly surprised. I haven’t experienced anything like this. Even when in the past I’ve played a role in a championship winning team I didn’t experience such a mass of people like here. This has outstripped my expectations,” Pardubice trainer Pavel Hynek, who joined the club in November 2010, was cited by the ČTK news agency as saying. Hynek first became head coach of an Extraliga team in 2008, coaching Plzeň and this is his first title as a head coach.

Some 9,000 fans also watched the game on giant screens in the center of Moravia’s main city. Kometa Brno attracted the highest attendances during the regular season, despite the team’s patchy form in the first half of the season (Kometa finished ninth, Pardubice third), and some fans camped out for as long as 24 hours to get tickets for playoff games. “For us you’re champions” the Brno fans cheered in the Kajot Arena and on the square in the third period as the prospect of their team turning the game disappeared.

“Even this silver [medal] is a huge success. After all we fought until the last moment even to get into the play off, and in the end we got all the way to the final,” Brno goaltender Jiří Trvaj told the server hokej.cz.

Back from the brink

After eliminating the Kladno Knights in the preliminary round of the playoff by three games to zero, Kometa caused a major upset by beating Sparta Prague, the winner of the regular season, by four games to two. The remarkable journey to the final series then saw Kometa overcome Plzeň, who finished the regular season in second spot, by a comfortable four games to one.

Pardubice overcame last year’s play-off silver medalists Vikovice and then Liberec to book their place in the final, but their journey was by no means smooth. In game seven of the semi final the team from eastern Bohemia was just 30 seconds from losing the series when Radovan Somík scored to take the game into overtime. Pardubice beat Liberec by four games to two in the semifinal series.