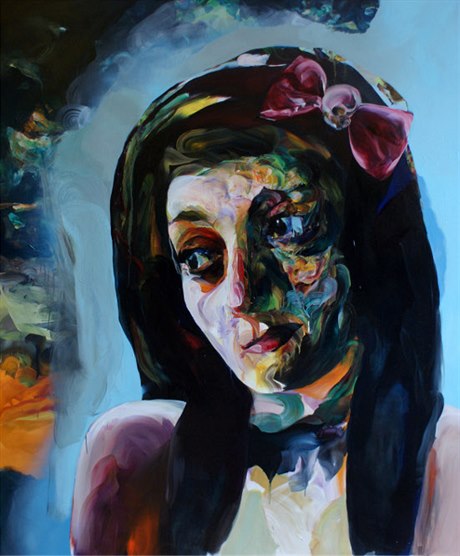 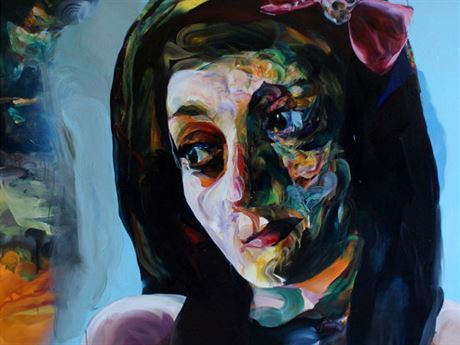 The Dea Orh Gallery’s current exhibition of contemporary Czech painting along with a rising talent from Berlin is a window into the present and future of a medium no longer viewed as a synonym of visual art. By setting off the work of an already successful German painter and three younger, lesser-known Czech contemporaries, the gallery is performing the dual role of providing valuable exposure to local talent while giving a glimpse of the broader context of European painting.

Whether your taste in painting leans toward hyperrealism, conceptual, abstract or colorful and expressive work containing figurative elements, there is something in this stimulating exhibition that will undoubtedly attract you.

Lars Teichmann has already established a reputation as an emerging painter on Berlin’s large and thriving art scene, having won the Euromobil Group Under 30 Prize at Arte Fiera in Bologna in 2009 and exhibited widely throughout Germany and abroad. Following the first Prague exhibition of his work at the Dea Orh Gallery, Teichmann will participate in the prestigious 54th Venice Biennale, which launches June 4.

Teichmann’s dark, imposing paintings at Dea Orh Gallery represent a unique blending of figurative and abstract art. On the one hand, they display the outlines of the grand tradition of European painting — portraits of women in lavish gowns, a Spanish inquisitor — yet the figures are often merely hinted at with splattered white paint and brief, surprising touches of color, as if Jackson Pollock wanted to copy a Velázquez without abandoning his own technique.

Teichmann told Czech Position that there is a balancing act between the abstract and figurative elements in his painting in order to leave space for the viewer’s imagination. “I’m trying to create something new … and it’s important to me to create something that looks like traditional painting but isn’t,” Teichmann said, adding that he never wants to give too much away.

Although he uses historical images as a base for some of the paintings, while others are freely created and tend to be more abstract, he is not so concerned with referencing the original work, as for example Francis Bacon was famous for doing. In the case of the painting “Padre,” the impetus for the work was reading a book about the history of torture and becoming fascinated with the Inquisition. The painting depicts the outlines of a figure of a man in an extremely broad-brimmed hat with a sash across his chest and a splash of crimson dripping over the surface of the canvas.

“The story isn’t so important that it should stand in front of the work. It should remain behind. For me, it’s more important to have powerful paintings,” Teichmann said.

As to whether the direction he has taken stands out on the Berlin art scene and whether achieving originality as a contemporary painter is difficult, Teichmann is unequivocal. “I don’t like to do things other people are doing. You have to be different, and not just different — there must be a quality in the paintings.”

Of course painters all engage in the same fundamental activity in so far as they start of in front of a blank canvas and try to think of what else is left to do in the history of painting. “Some guys are going to art fairs and looking to see what the latest trends are, then going back to the studio to try to create something, but this is a shortcut. You must be unique. There’s no other way.”

Painter without a brush

Evžen Šimera’s approach to painting is a similarly tenacious effort to achieve originality on canvas. And like Teichmann, he resists telling a story with his work, without at the same time falling back on a notion of a purely abstract painting not anchored in specific ideas. Beyond these basic characteristics though, the differences between the German painter and his younger Czech contemporary could hardly be more pronounced, and coming downstairs to where the exhibition is devoted to three young, up-and-coming Czech artists, is like entering a radically different world.

Šimera’s painting revolves around a purposeful avoidance of touching the canvas. It has been almost a decade since the painter regularly even used a brush, having adopted a drip technique that requires applying paint through a dropper, often in lines running from one end of the canvas to the other.

His conceptual, anti-expressionist approach in series such as his “New Drip Paintings” and “Zero Gravity Paintings” results in work that verges, in a way, on familiar territory of abstract painting, yet does so through strictly scientific, theoretical means, as if aiming to arrive at a painting by Jackson Pollock through the very opposite of spontaneity.

The “Zero Gravity Paintings” were literally carried out in a zero gravity environment, and Šimera points out that far from being a gimmick the idea followed from the theoretical base of his previous work.

“It was not some kind of bungee-jumping art with a crazy story behind it. There is a line of thinking, and I was commenting on a line of expressive painting from the ’50s and ’60s — of a Hans Hartung or Franz Kline — but there wasn’t the feelings of depression [like in their painting] or really any feelings. It was a comment and extension of my previous work with drip paintings,” Šimera told Czech Position

The possibilities of paint

The exhibition is rounded out by two more extremes of contemporary painting, with the hyperrealist works of Zdeněk Trs and the painterly, expressive canvases of Pavel Vašíček. Hyperrealism is a technique typically employed to show an object in the fullest detail, yet Trs’s paintings of objects obscured by a layer of gray fabric make this intention paradoxical. At the same time, the paintings themselves are striking, beautiful images, and the means and extent to which he conjures up visual and theoretical elements of painting makes the series a strong and fitting part of the exhibition overall.

Vašíček’s work is the most deceptively conventional painting the gallery is showing although just as a closer inspection of the individual paintings reveal a use of paint that creates the illusion of pictures within a picture, his highly expressive style is more multidimensional than you might at first suspect. Whether it is a landscape or a portrait of a woman’s face, the swirling paint creates a formidable impression, and like the other painters on display arrives at a hard-earned originality.