Orco’s shopping center venture with ECE and sale of a 10,000 sqm plot to Skanska are key steps along the road to redevelop Bubny 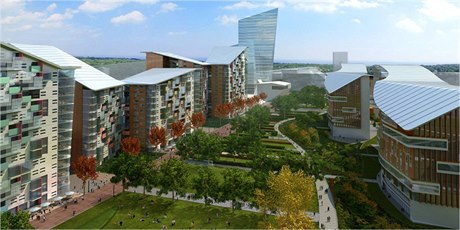 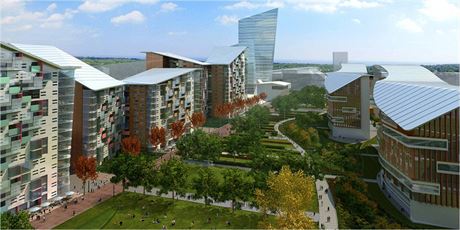 Since announcing the launch of their massive Bubny redevelopment project, Prague-listed developer Orco Property Group has done little with the 25-hectare plot that would signal to the public that a planned €3 billion investment is underway, apart from planting flags emblazoned with the Orco logo around the largely desolate area in the Prague 7 Holešovice district. Architectural and infrastructure planning, and consultations with municipal authorities, fail to impress.

Although Bubny was far from the only major urban redevelopment project to take a financial hit during the global financial crisis, investors appear to have shied away most quickly from ambitious and expensive projects in Central Europe. So perhaps it is a sign of a regional recovery that Bubny is seeing some action again, with the sale of the 10,000 sqm North East Corner plot to Skanska Property for €8.1 million.

‘In ten years people will all say it was obvious, but no one actually realizes that it will be a completely new quarter of Prague’

Ogi Jakšić, group development director at Orco Property Group, says the plan has always been to split the overall project into parts developed solely by Orco, parts developed in a JV, and parts that will be sold when their place in the master plan is finalized.

“[The North East Corner] a logical first plot to sell because the definition of the product for this piece of land was already done,” Jakšić told Czech Position. “They have bought a plot where there’s a plan for a certain number of square meters of commercial space to develop on the edge of our other area.”

Orco’s intends to retain control of the overall development, so future sales of land plots will be limited. In addition to the sale of the Bubny plot, Orco also sold Skanska its Vysočanská Brána office building for €20 million. The 12,000 sqm Class A office is located in Prague 9.

Britta Cesar, managing director of Skanska Property Czech Republic, said Bubny admirably fulfilled Skanska’s requirements of an optimum location with good transport connections. Just as Skanska is developing its latest green office project in a new development area of Pankrác, Prague 4, so it is looking to participate in the newly created neighborhood in Prague 7.

“We focus on locations with development potential which Bubny area is, and work to realize our visions together with other developers, municipalities, tenants and investors,” Cesar said.

One of the JVs on the site will be the co-development of a shopping center by Orco and German developer ECE, which will be located near the Vltavská metro station and the new train station set to replace the old Bubny Station.

Although the center will occupy a prime riverside site, the infrastructure challenges will be considerable. Due to the obstacles ahead ECE declined to comment beyond confirming the initial agreement. There has been speculation that construction on the center could begin around 2013 but the timing is difficult to predict until other features of the master plan fall into place.

Given ECE’s success in the region as a retail developer, most recently in Prague with its Arkády Pankrác center in Prague 4, Orco stands to benefit from its partner’s experience. Working with other developers with more narrow sector focus can offer “synergies which can create a lot of pluses,” Jakšić said. Furthermore, using JVs will allow for the site to be developed much quicker than if Orco were to do it all alone.

Ultimately, Orco believes in the potential of the project. There are other urban regeneration developments in Central Europe, but few or none with a similar location in a capital city, and with such high visibility and public transport connections in place. Add to this the plans for galleries, libraries and a university campus to complement the commercial and residential space and the project appears increasingly unique.

Orco’s intends to retain control of the overall development, so future sales of land plots will be limited

“In ten years people will all say it was obvious, but no one actually realizes that it will be a completely new quarter of Prague. Orco started here in 1991 with Vinohrady as the first district where our activities were focused, and nobody expected what eventually happened with Vinohrady,” Jakšić said. “Now, of course, everyone says it was so obvious — it’s the center and the potential is clear. Bubny is the same and it will be the same in 10 to 15 years. Bubny is big and no one realizes how strategic it is.”