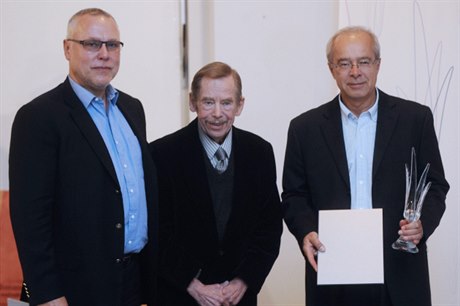 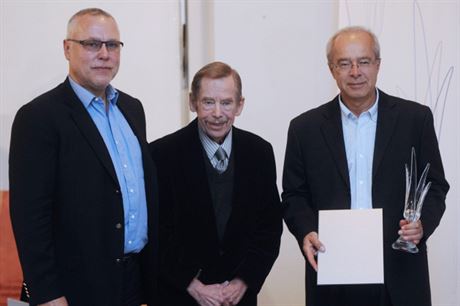 A new anti-corruption prize endowed by Czech billionaire Zdeněk Bakala has been awarded to Oldřich Kužílek, a former MP who helped draft freedom of information legislation and advised on transparency in government administration.

Former President Václav Havel, patron of the award, presented the White Lily (Bílá lilie) — along with Kč 200,000 — to Kužílek on Wednesday for his efforts to combat corruption in public life and promote greater openness.

Kužílek is also involved in the Open Society Foundation, which annually publishes standings of the public and state offices’ most serious errors or omissions in making information available to the public.

Among those on the White Lily jury was Adriana Krnáčová, a former director of the Czech branch of Transparency International; 15 people had been nominated for the award, including politicians, activists, academics and journalists.

Daniella Göttelová, the mayor of Černošice, a town just south of Prague, who was just one vote shy of receiving the main prize, was also recognized for being an independent voice in politics.

Göttelová had been struck from the Public Affairs (VV) list of candidates for ahead of the mid-2010 parliamentary elections for refusing to sign the party’s agreement pledge for obedience on the grounds that every politician should follow their conscience. She was also instrumental in allowing Černošice to be audited by another anti-corruption group, Oživení, along with six other Czech municipalities.

At the ceremony, Bakala, who has a majority stake in the Prague-listed regional energy group New World Resources (NWR) which controls Czech coal miner OKD, said widespread corruption in Czech society was undermining the country’s ability to withstand the looming economic crisis.

Among his philanthropic activities, Bakala — the second-richest Czech — is funding the reconstruction of the seat of the Václav Havel Library, established in 2007 to collect Havel’s works from various stages of his life – as Communist-era dissident, playwright and last president of the former Czechoslovakia and first president of the independent Czech Republic.

The third-richest Czech citizen, Agrofert owner Andrej Babiš, this month officially launched an anti-corruption civic initiative called ANO 2011 that may become a full-fledged political party ahead of the next parliamentary elections. Among its partners is the Anti-Corruption Endowment (NFPK) founded by financier Karel Janáček, which awards prizes to whistleblowers.