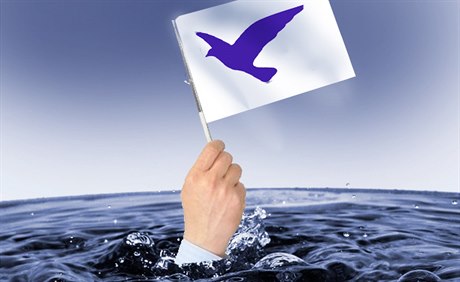 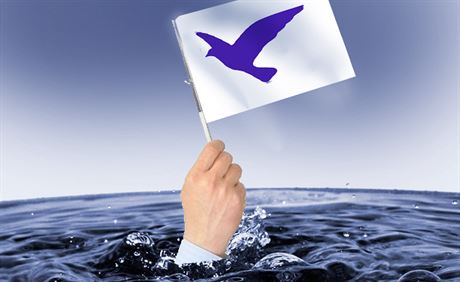 For the umpteenth time the main Czech government party, the right-of-center Civic Democrats (ODS) is bombastically mobilizing ahead of elections, this time for the fall Senate and regional elections. The latest campaign is based on a warning that the current public spending cuts and tax rises are needed to avoid a Greek scenario occurring in the Czech Republic.

But the campaign, which could be dubbed Greece II, rings as false as a three pound note and as empty as the Gobi desert. The ODS should stop acting according to its customary habits and wake up and present new faces and idea to the electors or they it will find itself kicked out of parliament. What’s more, for these elections such a campaign looks like it will just muddy the waters.

Warnings of a ballooning state debt were used by the ODS ahead of the parliamentary elections in 2010, the so-called Greece I mobilization, and would only be used by a complete idiot a second time round against the main opposition party, the Social Democrats (ČSSD). The Greek ploy would be good if it did not ring false from a government that has appeared to act so far on the basis of trial and error.

The government has no real conception for what it does, it tests things out and in the evening can overturn what was only decided that morning. The level of Value Added Tax rates, for example, are set according to how it feels at the time. One moment supplementing retirement pensions is seen as necessary; the next it is denounced as irresponsible because of the financial crisis and state of the national debt. The pensioner is quickly transformed from being an object for altruistic support, then to a living clean slate for whatever policies come to mind and, finally, as an object to be plucked clean.

The Greek ploy would be good if it did not ring false from a government which has appeared to act so far on the basis of trial and error.

The ODS has demonstrated a similar lack of systematic thinking towards its experiment with flat taxes and with its imposition of ceilings for pension and health insurance payments. It is now seeking to retreat from its more spurious and confused proposals, but the party is still brandishing its idea for a 30 percent tax on earnings above Kč 100,000 a month.

While the ODS has contributed to the astronomic earnings of some of this group, such as state managers who can easily earn a few million a month, it will amount to a knife at the throats of many citizens. The ODS will thus show off its power with a special raid on a selected group of the population.

The first parliamentary elections in which the ODS showed its arrogance and sought to make an impression was in 1996, the first democratic elections in the Czech Republic. In the election run up, the ODS campaign declared that it would show what it could do.

The billboards however, did not seek to share what had already been achieved, the fall of the “coalition” government of ODS, the Christian Democrats (KDU-ČSL) and Civic Democratic Alliance (ODA) and the early elections a year later. Even at that early stage the Goebbels-like call for mobilization went out. Perhaps as a result the following calls for mobilization in elections in 1998 and 2000 failed to bear fruit.

The ODS put everything on the parliamentary elections of 2006. It won thanks to the so-called Kubice report to parliament’s security committee, which warned of a cover up of the links between organized crime and top members of the then ČSSD-led government. Former top police officer Jan Kubice is now the non-aligned government minister in charge of the Ministry of Interior. The one-sided report was leaked to journalists by committee members protected by their parliamentary immunity. In the wake of the tied elections, the ODS was able to create a government with the KDU-ČSL and Greens.

In its short history, the ODS has resorted to many bombastic, empty and false slogans. These have, for example , claimed that “we don’t know dirty money. Others pledged to “shed light on privatizations, denounced the “the flight before lawyers,” proclaimed “the state is the worst housekeeper,” and advanced the theory that “liberalization will modernize the social state.” Thanks to this a few “godfathers,” mafia members and billionaires got rich on the back of sweet deals with the state.  Because the party can afford to do so,  it has acted in a haughty and pompous fashion.

The 2010 elections were spearheaded by ODS leader Mirek Topolánek, and he should be credited with being one of the first to put the spotlight on the party’s band of godfathers. The mobilization was completed by Topolánek’s successor, current prime minister Petr Nečas, who put the main stress on highlighting the dangers of a runaway budget deficit and risk of the Czech Republic repeating the errors of Greece.

The many recycled mobilizations of the ODS are no longer convincing.

The then Social Democrat leader Jiří Paroubek summed it up when he shared his observations of the ODS campaign.“I followed the ODS briefings with enjoyment. Civic Democracy could not raise itself from its shadows, it did not have a program, it was trying to make something out of nothing. Everything was general, empty, false,” he commented.

The many recycled mobilizations of the ODS are no longer convincing. The frequent scandals of the ODS, TOP 09 and Public Affairs (VV) coalition do not cease to undermine the already low level of public confidence in the political scene. It does not help the ODS that one of the biggest scandals was centered on former minister of the environment and deputy party chairman Pavel Drobil. He was forced to resign in December 2011 after an official at the State Environment Fund (SFŽP) revealed that the party was seeking payments for a party slush fund. He was replaced as a minister by the equally unconvincing party colleague Tomáš Chalupa.

In spite of his scandalous departure from the government, Drobil apparently feels the call to take a lead in the ODS Senate and regional campaigns. The problem is that the party should not be relying on a Greek II campaign but has nothing else to fall back on. The party already has collected a lot of scandal skeletons in the cupboard, with the latest one coming out, concerning Prague lobbyist and “godfather” Roman Janoušek, only symptomatic of the disease.

In 1989 the newspeak phrase “old structures” was frequently use to refer to all that from the previous era. It is, however, also applicable much of that which has passed in the last 20 years of modern Czech history. Old Structures unscrupulously preyed upon the political structures in the first 10 years after the overthrow of communism, achieved management positions in companies and were apparent in party leaderships and completely filled the public sector. In the next decade they were laboriously removed under public pressure;  old structures from the ’50s, ’60s, ’70s, ’80s and ’90s.

End of the new

After the Velvet Revolution the avant garde of society usurped the whole state and took control of its property flows. Now we have new “old structures” that have dug themselves into power. It they continue to abuse power the same as before and continue to disappoint the public they could follow the fate of their predecessors and become a new set of after 20 year has beens. That could easily be the fate of the membership of the new “old structures” and the quasi democratic and godfather parties. The old secretaries of the local, regional, and state communist parties thought their end was impossible. But what held good for them can easily hold true for today’s ODS godfathers.

As a starting point, the Civic Democratic leadership should shift from the stress on attacking the enemy outside, as has been the case 1996, and spend a bit of time on self reflection. The party’s arrogance is becoming less and less bearable for increasingly angered voters. The party should drop its customary behavior and come before voters with new faces and try to rebuild public confidence.

It could start down this path ahead of the senate and regional elections. And if the parliamentary elections scheduled for 2014 do not come earlier, this could pay off with the party getting more than 10 percent of the popular vote. If not, and the party godfathers continue to keep a grip on power, then the ODS could slip below the five percent threshold and disappear as a parliamentary party.