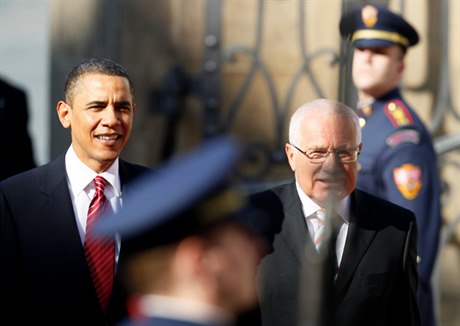 US President Barack Obama and his Czech counterpart Václav Klaus came in fist and second, respectively, in the poll foto: © Reuters, Česká pozice 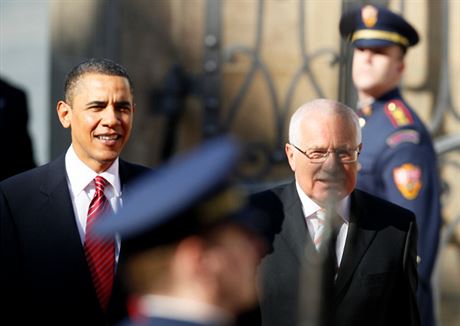 The international politician most trusted by Czechs is US President Barack Obama, according to a poll published this week by the Public Opinion Research Center (CVVM) of the Institute of Sociology of the Academy of Sciences. Russian Prime Minister Vladimir Putin was the least trusted. Overall, most politicans were deemed on balance to be “untrustworthy.”

Obama was trusted by 68 percent of respondents, while 21 percent did not trust him, giving him an overall positive rating for 47 percent (subtracting the mistrust figure from the trust figure). Only 1 percent of people didn’t know how he was, and 10 percent had no opinion. ‘The predominantly positive assessment of Barack Obama is in relatively sharply contrast to the assessment of his predecessor.’

“The predominantly positive assessment of Barack Obama is in relatively sharply contrast to the assessment of his predecessor, George W. Bush, who consistently and fairly strongly prevailed in distrust [from Czech respondents],”  CVVM analyst Daniel Kunštát stated in the report.

The poll results are based on questioning done in November 2010. When results for Obama are tracked over time, his approval is going up. He was trusted by 40 percent and not trusted by 15 percent in September 2008; while in November 2009, that rose to 67 percent trusting and 21 percent not trusting.

Czech President Václav Klaus, who was included among the international leaders as a basis of comparison, placed second, with 65 percent trusting him and 31 percent not, for an overall positive rating of 34 percent. Since May 2004, his ratings have stayed within a band of 62 to 73 percent trust and 22 to 33 percent mistrust.

Only seven politicians out of the 20 in the survey were trusted by more people than not. Aside from Obama and Klaus, these included German Chancellor Angela Merkel (plus 24 percent) Slovak Prime Minister Iveta Radičová (plus 8 percent), Polish President Bronisław Komorowski (plus 6 percent), British Prime Minister David Cameron (plus 4 percent) and Polish Prime Minister Donald Tusk (plus 2 percent). European Commission President José Manuel Barroso came in even, with as many people trusting him as not trusting him.

In September 2008, Sarkozy had 36 percent trusting him and 21 percent not, which was good enough for a plus 15 positive rating. But he scored a negative 38 in November 2009 and a negative 24 in the most recent survey.

Iranian President Ahmadinejad did slightly better with a negative 20; but he did score the absolute lowest on trust, with just 2 percent. Most Czechs — some 64 percent — did not know who the Iranian leader was, and he only scored 22 percent on mistrust, which saved him from a lower overall ranking.

Among EU leaders, the only person to score lower than Sarkozy was scandal-plagued Italian Prime Minister Berlusconi, with a negative 34.

Coming in last of all was Russian Prime Minister Putin, with a negative 41. While 20 percent of Czechs trust him, he scored the highest of any politician for mistrust, at 61 percent. Putin has been unpopular among Czechs since the CVVM poll began in 2004, with trust ranging between 20 and 26 percent, and mistrust between 47 and 63 percent.