Notes from underground: a look back at Czech samizdat 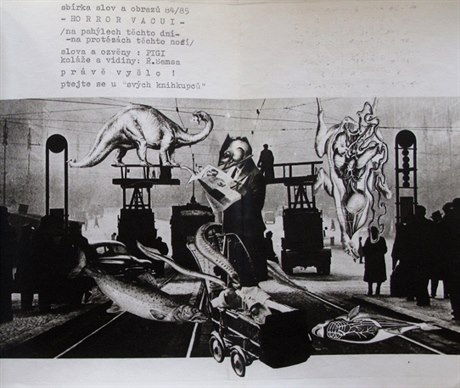 From the journal SadoMaso, 1984, a pun on S&M and the Czech word for meat (maso) foto:  © SadoMaso, Česká pozice 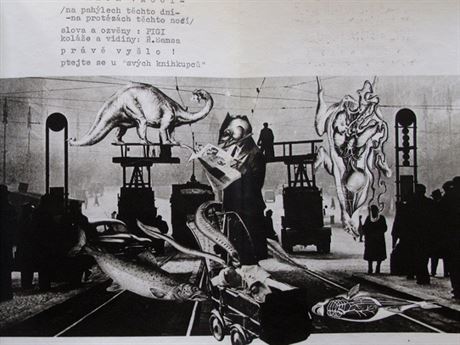 Since the death of Václav Havel on Sunday, Czech television has been filled with scenes from the ‘60s through the ‘80s documenting the dissident movement the former president and playwright played such a prominent role in. At the Czech Center in New York City, a spotlight is shining on that same era of history in the exhibition Samizdat: The Czech Art of Resistance, 1968–1989.

Though the term “samizdat” refers to self-publishing it has nothing in common with the way that term is understood in free, democratic countries. Nor is samizdat an equivalent to Western ideas of underground publishing. During communism, dissidents in the Soviet Bloc had to rely on their own information distribution system, publishing censored books, journals and documents on their own and then passing out handmade copies.

The samizdat exhibition is presenting 120 of these rarely seen works as well as footage of underground concerts and bootleg recordings of banned Czech music. While many people have read about samizdat publications of famous novels and poems, the exhibition’s Czech-born Canadian curator, Daniela Sneppova, insists that seeing the actual work is an entirely different experience.

“On my first trip back to Czechoslovakia in 1990, I bought the journals Vokno and Revolver Revue, and found out that they had been samizdat before ’89. This made me very curious because my understanding as a naive North American was that nothing was available. Once I started doing the research though my brain was blown wide open,” Sneppova told Czech Position.

It was not only the quality and extent of the work that surprised Sneppova but the breadth of the material and variety of producers. “It wasn’t just [famous] Czech intellectuals like Ivan Klíma and Ludvík Vaculík. It was people working in sociology and economics. Anything that comes to mind was being produced through unofficial channels. There’s no stereotypical writer or producer of samizdat.”

The daughter of a writer who emigrated from Czechoslovakia in ’68, Sneppova had heard stories of how many people were producing samizdat pamphlets and other material and knew of the consequences if they were caught. “It became fascinating to me to think who was doing it because it came at great personal risk,” she said.

At a symposium held in New York that accompanied the exhibition’s opening Czech writer, Jáchym Topol, who debuted as a samizdat writer, spoke about the chief element of publishing samizdat work as living in fear while doing it. For Sneppova it raised the question of why some participated in it and others didn’t as well as the schizophrenia of living a truly secret, underground life.

“I can’t imagine having to have lived those two lives — the official life where you spout this doctrine and then your other life where you say or write what you really think.”

Besides the samizdat works themselves, the exhibition makes use of surveillance photos from the secret police (StB) archives of people included or mentioned in the show. There are also objects and décor from the period, such as a reel-to-reel tape recorder used by The Plastic People of the Universe and typewriters on which the manuscripts were written and copied. Sneppova says that these objects were ways to help bring these alien experiences closer to New York audiences who have no equivalent experience of censorship and oppression.

When you read about samizdat literature you assume that like ordinary literature most of its creativity is confined to the text itself. Seeing the books on display though quickly dispels this illusion, for the authors of samizdat had to marshal their creativity for an altogether different audience than your typical writer; they had to escape the detection of the secret police.

One of the most interesting books in the exhibition is a 1979 copy of Egon Bondy’s Notes on the History of Philosophy in which the manuscript pages were photographed individually and then placed in a generic folder of photographic paper. Then there were the works referred to as “tamizdat” because the books were published in Germany (tam means “there” in Czech and Russian) and then smuggled back into the country. The show has tamizdat Bondy work — a palm-sized fold-out book in which a magnifying glass was placed in the book’s spine to better read the small type.

There is a 1979 edition of Sigmund Freud’s Freud on Literature where the cover is made from wood-grain wallpaper as a kind of camouflage. Other books were made from insulation, office materials such as binders and calendars.

Some of the books and art works inside are simply stunning art that goes beyond the political definitions given to samizdat, particularly in the West. “A lot of the work wasn’t political in content, but the act of making it became political,” Sneppova said.

Due to the limited circles these books and music circulated in during communism many of it still hasn’t been widely seen and heard even in the Czech Republic. Sneppova says that there remains a lot more to be seen and discovered in shedding light on the legacy of samizdat, a legacy which is in the past for its Czech practitioners but in discussions at the symposium on less fortunate compatriots, is still very much a relevant concern today in much of the world.