No Medvedev or Putin at Havel’s funeral? No Temelín contract for Russians! 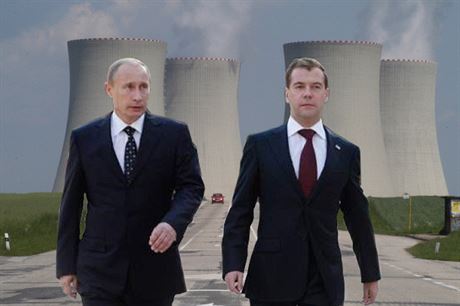 “The influential Information Institute think tank hereby declares that as Czechs we feel insulted by the hitherto stance of Russia and its official representatives towards the decease of our president Václav Havel,” the statement reads.

Whereas many world leaders have spoken eloquently about the passing of the former Czech dissident and playwright and announced plans to atttend his funeral on Friday, Russian authorities reacted to Havel’s death belatedly, posting a short announcement on the website of the Russian embassy in Prague informing that the embassy had sent a letter of condolences in the name of the Russian leadership to current Czech President Václav Klaus via official diplomatic channels. ‘The ruling elite in Russia must realize that Czechs as an independent people can hardly tolerate the fact that they gave priority to the North Korean dictator Kim Jong-il over a leader of the humane world, Václav Havel.’

Neither Medvedev nor Putin were mentioned by name in the embassy’s announcement, and no expression of condolences on the passing of Havel has been published on Dmitry Medvedev’s official website, Kremlin.ru. By contrast, the Kremlin announced within hours after the world learned of the death of North Korean despot Kim Jong-il that Medvedev had sent a message of condolence to Kim Jong-un, his son and successor.

“The ruling elite in Russia must realize that Czechs as an independent people can hardly tolerate the fact that they gave priority to the North Korean dictator Kim Jong-il over a leader of the humane world, Václav Havel,” famous Czech war photographer Anotnín Kratochvíl, a four-times winner of the World Press Photo award, was cited as saying in the Information Institute statement.

President Medvedev was in Prague at the invitation of the current Czech President a little over a week before Havel died. “[Among] other points, he placed great importance on the giant contract to expand the Temelín nuclear power plant. If President Medvedev or Prime Minister Putin do not come for the funeral, the participation of Russian firms in the giant Temelín tender will be unlikely,” the statement reads.

Bilateral negotiations during Medvedev’s Dec. 7–8 official state visit focused on business ties, and Klaus made clear that, at this stage in the bidding process, he sees the Russian consortium as offering the best deal for the Czech as regards expanding Temelín.

When asked at a joint press conference about the political situation in Russia following the elections to the State Duma on Dec. 4 — the results of which opposition parties and many civic organizations claim were grossly falsified in favor of the party of power United Russia — Klaus said it was not in his competence to comment on the issue, in the same way he would not expect Medvedev to comment on a recent one-hour strike by Czech teachers.

The Information Institute think tank strongly disagrees. “Contemporary Russia should pay more attention to and heed what Václav Havel said about the [current] regime in the country and what is happening in Russia today: negotiating from a position of power, rejecting objections, and holding dialogue with evil forces is short-sighted.”

“Václav Havel was our president, he was strong authority in our country, and he will be a great idol and example for future generations,” the statement concludes.

On Wednesday, the Russian news agency Interfax reported the Russian leadership is to send Presidential Ombudsman for Human Rights Vladimir Lukin to represent the Russian state at Havel’s funeral on Friday, December 23.