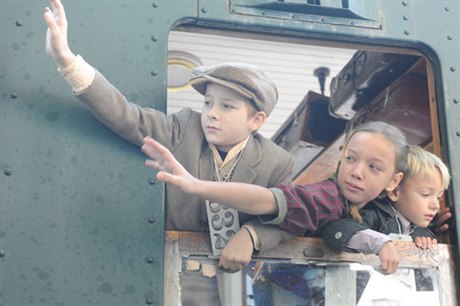 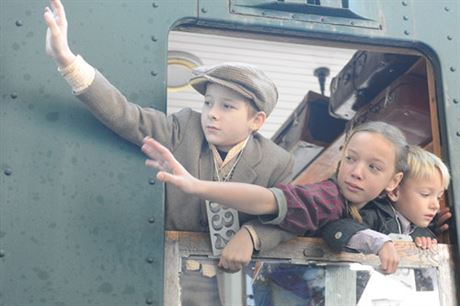 Sir Nicholas Winton, the man who organized the rescue of 669 children from former Czechoslovakia on the eve of World War II, received an outpouring of admiration and gratefulness at the premiere of Slovak director Matej Mináč’s film “Nicky’s Children,” which tells the story from the perspecitve of those Winton saved.

Decades after he arranged the life-saving transports, later to be known as kindertransport, he received a standing ovation at the screening in Prague this Thursday, and cheers from a crowd filled with children holding signs that read “Thank you, Mr. Winton” and “Life is Beautiful.”

The enduring power of the kindertransport story was the inspriation for Mináč’s two previous films about Winton: the drama “All My Loved Ones” and the Emmy award-winning documentary “The Power of Good.”

When asked by Mináč why Winton thought young people still find the story so fascinating, the now 101-year old Briton replied that his hope is the story of the rescue can offer younger people insight into their own lives. “It’s an indication for the future. I don’t think it helps looking back to the past, but if it gives them a way of helping for the future, that’s my ambition,” he said.

Czech Senate deputy head Přemysl Sobotka (Civic Democrats, ODS) has nominated Winton for Nobel Peace Prize this year; signatures from 100,000 children are part of this second petition, which was handed over to Norway’s ambassador to the Czech Republic, Jens Eikaas, after the screening. Winton was also nominated by the Czech Republic for the Nobel Peace Prize in 2008.

“I will be honored to forward the nomination of Sir Nicholas to the Norwegian Nobel Committee,” Eikaas told the audience. “The committee sees it as important to remind the world that rights so widely enjoyed today were fought for — and won — by persons who took great risks. What Sir Nicholas did for the Czechoslovak children, at personal risk to himself, thus embodies core values of the Peace Prize.”

A ripple effect of good deeds

In “Nicky’s Family,” Mináč re-creates some of the events that led up to Winton’s involvement in the effort to rescue the children, interwoven with interviews from survivors and haunting historical footage.

The film portrays the pain those children felt as they tried to fathom their separation from grieving parents; their adjustment to life with adoptive families in Britain; and, for many, the return to their homelands after the war — with the reality of their own miraculous survival made heartbreakingly clear after discovering there is no family to return home to. These experiences are put into new context, as the survivors themselves recollect their unique stories.

Out of these unimaginably painful experiences, the individual stories of “Winton’s children” are vast, their lives full. The positivity of Winton and the survivors is incredible testament to human resiliency that has inspired a ripple effect of positive influence.

In the film, individuals like Ben Abeles, a leading US scientist who created the propulsion systems for the Voyager and Cassini; Tom Schrecker, co-founder of Reader’s Digest; Alice Masters, a former director of the International Monetary Fund; and the narrator of the documentary, leading Canadian journalist Joe Schlesinger, along with many more, who candidly share their pain, joy and hope.

The children and grandchildren of those saved by Winton also express their understanding and gratitude for his selfless efforts through their own activism in human rights and charity. It is this impact that Winton’s story and the stories of the children he saved has had on young people throughout the world, in the form of charitable projects and organizations created in his honor, which inspired Mináč in continuing with his series of films.

“The film may be striking a match in the minds of particularly young people, the film may be a kind of starting block, with the help of which we can bring goodness to the surface,” Mináč said in a press release.

Mináč has said that after coming across the book “Pearls of Childhood” by Vera Gissing, one of the rescued children, he was awestruck by this story, which before he had known nothing about; thus began his journey in recording it through film. He first met Winton in 1998 in the UK.

“I remember that I was very fearful. I have never seen a hero with my own eyes; I met with them only in films or literature,” Mináč said in the statement. “Then, he opened the door and greeted me as a very ordinary man, who did not look like he had just celebrated his 90th birthday. We talked a long time.”

From this first meeting Mináč was inspired to make his first film. “There was a story in my heart that hinted that I should make a documentary about this remarkable man,” he said.

Mináč’s films about Winton have helped saved the story itself from being forgotten. It was after the release of Mináč’s first two films that Winton truly began to garner international attention. Winton was knighted by Queen Elizabeth II in 2002, the year that his film “The Power of Good” won an Emmy for best documentary. Previously, Mináč relased the dramatic feauture film “All My Loved Ones” (Vsichni moji blízcí) in 1999.

Winton himself was secretive about his activities, and it wasn’t until his wife discovered a scrapbook in their attic in 1988 that the events of 1938-39 in Prague came back to life.

“Nicky’s Family” was filmed in the Czech Republic, Slovakia, Hungary, UK, US, France, Cambodia, Canada, Israel and Denmark and resulted in more than 450 hours of footage and authentic historical material. It is the last in Mináč’s series and will be opening in Czech cinemas on Feb. 3 before being screened internationally.