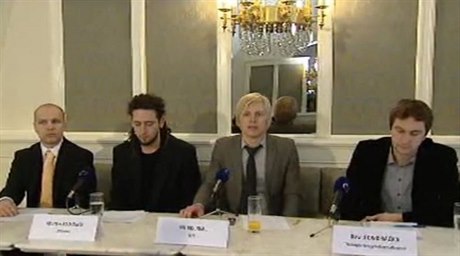 Representatives of NGOs make the case for expanding the NKÚ’s powers — as the ODS promised to do in the coalition’s anti-corruption agreement — at Monday’s press conference foto: Česká televize , Česká pozice 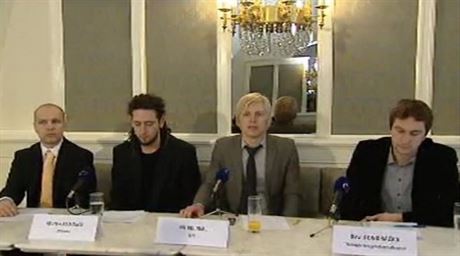 Three anti-corruption groups say the Civic Democrats (ODS) are trying to thwart legislation to grant the Supreme Audit Office (NKÚ) powers to control and audit the finances of state and city-owned entities — powers they say are essential to combat organized crime in the sphere. The amendment’s author, MP Stanislav Polčák (TOP 09), supports the NGOs’ claim about obstruction by the ODS – its coalition partner.

The NGOs — the Czech branch of watchdog Transparency International, the Environment Law Service (EPS), and Oživení (Revival) — made the allegations in a press conference called, in their own words, to “create pressure” on the ODS to negotiate and support Polčák’s proposal, which has been approved by two parliamentary committees. The ODS is the senior party in the three-member government coalition, in which TOP 09 and Public Affairs (VV) are junior partners.

“The proposal now with the Chamber of Deputies [the lower house of the Czech parliament] has on two occasions been withdrawn from the [coalition government’s] agenda. According to our information, this is because of resistance by the ODS,” Jiří Boudal from the EPS, a non-profit public interest law group, told reporters.

The proposal to extend NKÚ powers to audit municipal and state-owned firms — such as public transport and waste disposal companies on the municipal level, and corporations such as power major ČEZ and Czech Television (ČT) on the state level — was put to the lower hous? of parliament’s controls and audits committee by Polčák. The provision was then put to the Constitutional Legislative Committee where a majority approved it.

“In all the committees in which the material was discussed, only the ODS did not support it. I now want to ask them how they want to fulfill the coalition agreement, which states that controls and audits of commercial corporations under the patronage of the state, regions and municipalities will be improved,” Polčák told the daily Mladá fronta dnes (MfD).

The anti-corruption NGOs say introducing greater control over publically controlled companies is a key area of the coalition’s anti-corruption strategy, which the ODS, TOP 09 and VV endorsed upon forming the coalition in 2010. ‘What’s going on there [in the DPP] is a classic case of organized crime.’

Transparency International Czech Republic director David Ondráčka noted that the domestic counter-espionage and intelligence agency BIS warned in its latest annual report of high levels of corruption in publically-owned companies. Specifically, he mentioned alleged conflicts of interest in ČEZ and suspicious contracts awarded to nontransparent firms by the Prague public transport company (DPP). “What’s going on there [in the DPP] is a classic case of organized crime,” Ondráčka said.

Documents publish in recent weeks indicate the firm British Virgin Islands-registered firm Cokeville Assets had been receiving Kč 0.17 from every paper ticket sold by the DPP, which also massively over paid for LCD screens installed in several Prague metro stations, for example. The Endowment Fund Against Corruption (NFPK) last December published a contract between Cokeville and ODS lobbyist Ivo Rittig, represented by David Michal of the law firm Šáchta & Partners, which it says proves Rittig was the end recipient.

At the beginning of February MfD reported it had obtained documents indicating the same Cokeville signed a contract in mid-2009 under which it would provisionally be paid a commission of Kč 130 million following the sale of Škoda Power, a power plant equipment maker that was part of Škoda Plzeň, which was privatized in 2002 and has since been renamed Škoda Holding.

Martin Roman, who resigned as ČEZ chief last year, was CEO of Škoda Power before joining the utility. Anti-corruption police have since launched a probe into suspect contracts between ČEZ and Škoda Power. According to some reports, Roman and others may have taken a stake in Škoda Power through offshore companies with hidden ownership structures. Roman has denied the allegations.

After stepping down as CEO, Roman was appointed to ČEZ’s supervisory board. In mid-January ČEZ published the results of an internal audit which, unsurprisingly, didn’t reveal any indication of disadvantageous or dubious contracts with Škoda Power. When later confronted with the reports about the suspected conflicts of interest within the upper echelons of ČEZ, both Prime Minister Petr Nečas (ODS), and Finance Minister Mirsolav Klaousek (TOP 09), both said they had no reason to doubt the internal audit.

Commenting on MfD’s reports on the ČEZ–Škoda ties, EPS wrote: “We all know that in this case it is not just about bad commercial management of the firm and “rigged” tenders. What is in play is the large political responsibility of those who in their role as lawmakers should have monitored ČEZ, and those who exercised owners’ rights on behalf of the state, i.e. the Ministry of Finance and in the case of this prolific firm, basically the whole government.”

For his part, ODS club of MPs head Zbyněk Stanjura told the daily that the amendment put forth by Polčák did not contain a clause to give the Supreme Audit Office (NKÚ) the powers in question. ‘[We’re] we’re ready to support the bill in the form in which it was passed by the government.’

“It’s not in the draft approved by the government, and we’re ready to support the bill in the form in which it was passed by the government. [The implementation] of controls of state, regional, and municipal firms has not been discussed sufficiently,” he said. “If there’s not an agreement, then this proposal won’t pass because according to the coalition agreement we should support government proposals, or those agreed upon by the coalition.”

According to the NGOs, however, ODS’ stance looks likely to seal the fate of Polčák’s proposal. “We’re afraid that despite the fact the proposal has the support of four of five of the parliamentary parties excluding the ODS, there’s a possibility it won’t be passed, or discussion of the bill will be delayed,” Jiří Boural from the EPS told the press conference.

EPS’ Martin Fadrný said he and colleagues have met with ODS representatives to discuss their reasons behind their opposition to the extension of NKÚ powers. He said they pointed to a fear of arbitration, lack of capacity and know-how within the NKÚ to conduct effective audits of state firms, and reservations about the current effectiveness of the auditng office in general. ‘The ODS and government conducted no analysis nor have any studies to back these claims.’

Fadrný cast doubt on that interpretation. “The ODS and government conducted no analysis nor have any studies to back these claims,” he told reporters, adding that counterparts to the NKÚ in neighboring countries, including Poland and Slovakia, have powers to audit state and city-owned firms and that there is no evidence they face more arbitration claims as a result.

Further, the NGOs say that lack of capacity is a false argument and note the ODS has agreed to the NKÚ’s powers being extended to companies and firms owned by districts, or communes, but not those on the higher municipal and regional level and on the state level; in this last category, there are only a couple dozen firms whereas on the communal level there are thousands, they said.

The NGOs also pointed out that the government’s economic advisory council, NERV, supports the extension of the NKÚ’s powers as proposed by Constitutional Legislative Committee.

Stanjura said that a working group has been set up by Polčák, deputy prime minister for the anti-corruption strategy Karolína Peake (VV), and MP Marek Benda (ODS), with the group is scheduled to convene on Tuesday (Feb. 21). Benda was cited by MfD as saying that as far as he is aware, none of the coalition parties has requested the proposal to extend the NKÚ’s powers be discussed among the coalition party leaders and Cabinet ministers.

Polčák, though author of the proposal, is skeptical the working group meeting will produce results. “I don’t expect any significant progress from Tuesday’s meeting because the ODS is convinved that an amendment to place controls over Czech Railways (ČD) or ČEZ would damage the state,” Polčák said.