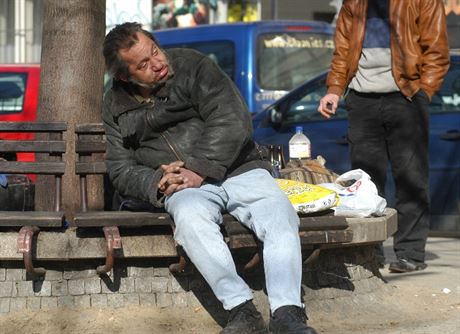 The new strategy seeks to deal with the causes of homelessness and focuses on reinsertion in society | foto: © ČESKÁ POZICE, Česká pozice

Prague City Hall appears to have run for cover after a storm of protest over plans to ship out its homeless to a camp on the outskirts of the Czech capital and is now plotting a more progressive policy for those unfornutate residents without a roof over their heads.

Just over a year ago, City Hall made headlines with its plans to crackdown on the city’s homeless and corral them out to a camp in a remote area of Prague. The “out of sight, out of mind” solution was put forward by then councilor Jiří Janeček of the center-right Civic Democrat (ODS), who argued that such a center could at least deal with the hardcore drunks and troublemakers who simply cannot be handled at other hostels and institutions.

Janeček’s controversial project, dubbed by charitable and other organizations as a step back to the Dark Ages — or more recent dark chapters of history featuring concentration camps — has now been banished, like its proponent. City Hall will soon ask for support on a more mainstream and progressive approach to dealing with the homeless. Meanwhile, after failing in his bid to enter the lower house of Parliament, Janeček has devoted himself to politics in the Prague 11 district and is no longer on the city council.

A new strategy for the homeless until 2020 has been drawn up by Janeček’s replacement as the City Hall executive council member responsible for social policy, Petr Dolínek, of the center-left Social Democrats (ČSSD).

“It counts on a differentiated approach to the problem of people without a roof over their heads and puts the emphasis primarily on prevention and resocialization, including social housing and training apprenticeships with accommodation and so on,” Dolínek’s office stated. The new strategy, the first ever long-term blueprint for the homeless drawn up by Prague, should be adopted within the next few weeks. ‘The real test will be whether the words in the strategy translate into actions.’

NGOs dealing with the homeless say the new strategy for the estimated 3,000-3,500 homeless in the capital does appear to be heading in the right direction. “Our impression of the strategy is that it is fine. There is a new regime in City Hall, and they are taking this a lot more seriously. ,” commented the head of the Salvation Army in the Czech Republic, Michael Stannett. “The real test will be whether the words in the strategy translate into actions,” he cautioned.

Some skepticism about City Hall intentions might stem from the fact that Janeček’s hardline camp proposal — including the idea that the homeless would be driven from the city center by regular checks and picked up by city minibuses operating a bit like dogcatchers do in the US — had another face with some help offered for those seeking to get back in the mainstream: a limited amount of social housing and training programs offered for those seeking reinsertion in society.

‘There is a new regime in City Hall, and they are taking this a lot more seriously.’

Concerns about Prague’s long-term capacity to deliver on a strategy for the homeless have also been fueled by slow moves to put in place its winter help program. That program counts on calling a tender inviting offers to provide 300 beds and meet the capital’s shelter shortfall for the homeless over the winter months. “So far, I have seen no signs of this tender, and we are already in mid-October,” commented Stannett. “They seem to be leaving it a bit late.”

The tender is being backed as a cheaper option than City Hall building its own shelters. “Renting accommodation capacity is a lot cheaper and more flexible when compared with building new capacity. That is why I would urge the operators of Prague hostels to take part in the proceedings,” Dolínek said in a statement.

If the offers from the private sector fall short of expectations, City Hall says it is ready to look at the possible purchase of inflatable buildings which could be moved to various sites across the city where needed. The results of the tender should be clear in November, his office said.

The Salvation Army’s Stannett says NGOs involved in caring for the homeless are concerned at the prospect of a double whammy next year: Tighter financing from government and local councils coupled with a rise in demand as benefit cuts, clampdowns, slower payments and the prospect of more unemployed translates into more homeless clients. ‘[So] far there has been no signal from Czech ministries whether they will step in and meet the funding difference.’

Worries have in particular been raised by the fact that tens of millions of crowns in funding from European Union social funds have been frozen nationwide because of suspicions that it has not been administered properly by Czech officials. “The funds have been frozen for the first six months of next year and so far there has been no signal from Czech ministries whether they will step in and meet the funding difference,” Stannett said. If not, he says programs already running on a shoestring could be cut and the situation of the homeless and those in danger of joining them will dramatically worsen.