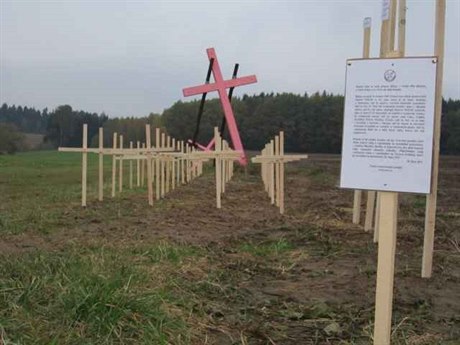 The crosses at the site of the mass grave near Dobronín serve also as symbols of differing interpretations of events in May 1945 foto: © ČTK, Česká pozice 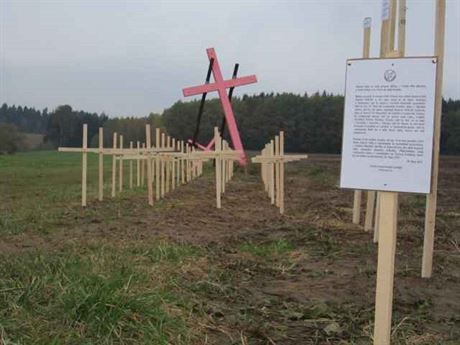 The discovery of human remains in a mass grave near the village of Dobronín in western Moravia in August 2010 led to the launch of a historical criminal investigation — and sparked an emotional and divisive national debate about reprisals against Sudeten Germans at the end of World War II in then-Czechoslovakia. Police now have the results of DNA tests on the remains of the 13 males between the age of 30 and 60 — allegedly the victims of a violent death — and samples from their potential descendents.

Since the discovery, the mass grave outside Dobronín has become the subject of contentious speculation, with several versions of events circulating, but to date practically no bona fide evidence has emerged to substantiate them.

Former Sudeten-German residents of Dobronín and nearby villages have given accounts of a massacre of local ethnic Germans that took place on May 19, 1945, less than two weeks after the end of the war. The most detailed account has come from one Fritz Hawelky, who gave the names, and for the most part, the ages of 17 alleged victims, whom he said he knew personally. His list includes the names of boys aged 4, 5, 6 and 13, but according to the findings of the archeologists who excavated the mass grave, no remains of minors were found.

Sudeten German organizations say that 17 local German residents remain unaccounted for while six of the alleged victims named by Hawelky are on the International Red Cross’ list of missing persons.

According to Czech historian Václav Houživička, who has drawn on a number of sources, between the end of hostilities in May 1945 and the Potsdam Agreement in August 1945, around 600,000 ethnic Germans fled or were expelled from Czechoslovakia. A joint German–Czech commission on the “expulsion” — and the word chosen to describe the movement of peoples is itself a point of contention — concluded that between 19,000 and 30,000 ethnic Germans were killed during the expulsions.

Six of the alleged victims named by Hawelky are on the International Red Cross’ list of missing personsIn her 2003 historical novel Bergersdorf, the German name for the area around Dobronín and Kammená, German author Herma Kennel describes how over a dozen local German men were rounded up by drunk partisans and marched out of the village, made to dig a grave, and then hacked to death with axes and picks; those who did not die from their wounds were then shot. The perpetrators then celebrated until the morning in a pub in Dobronín.

Kennel, a political scientist by education, based the story on personal accounts of former German residents of Dobronín — first and foremost her mother in law — however, the work is also part fiction, and the accounts mostly undocumented. Critics say the line between fiction and supposed fact is blurred.

A local Czech activist and amateur historian  is also convinced the remains are those of Sudeten German farmers and craftsmen, natives of Dobronín murdered by marauding Czech pro-communist partisans. Milan Litavský, who rules out the possibility that the alleged victims were Nazi soldiers, erected a large wooden cross at the site of the mass grave in 2010, which was vandalized at the beginning of this year. He and other members of the local community then erected another cross, measuring almost four meters in height.

Crosses as versions of history

In October this activists from the left-wing Czech National Socialist Party (ČSNS) painted Litavský’s giant new cross pink and planted 64 small wooden crosses next to it to commemorate the victims of a massacre by German troops in Velké Meziříčí, about 35 kilometers from Dobronín, in May 1945.

‘I still refuse to accept that cruel bloodthirsty Czechs brutally bludgeoned some poor [innocent] Germans’“Through this action, we wanted to express our sorrow that in this country it’s permitted to erect a monument to Nazis and that history is being distorted. The dead there were members of the Nazi party and came from the nearby village of Kamenná, which was united in taking pride in being named an exemplary SS village,” ČSNS deputy chairman Michal Klusáček told the Czech News Agency (ČTK) last month.

Stories told in low voices about the supposed murder of Germans nearby have, according to various reports, been recounted in the local area since the end of the war, though there is no documented evidence or accounts in Czech archives.

“As a boy, I heard that Germans were killed here. On the other hand, they could have been Italians who were building a nearby railway,” Dobronín Mayor Jiří Vlach (Communist Party, KSČM) told the news server parlamentnilisty.cz.

“I still refuse to accept that cruel bloodthirsty Czechs brutally bludgeoned some poor [innocent] Germans. The situation at the end of the war was very complicated. I know that a young German soldier deserted from the front and took refuge with a farmer he knew. When he though the war was over, he went to the pub for a beer; however, at the station there was a [German] military train with anti-aircraft guns. Another German farmer snitched on him and a patrol from the station shot him, which caused tensions even among Germans [in the area]. Thus it could have been a revenge killing between rival family clans,” Vlach said.

At the beginning of this year, Jihlava-based journalist Miroslav Mareš filed a criminal complaint against unknown perpetrators for suspected murder of the persons whose remains were uncovered in 2010 and in early 2011. Late this March, detective Michal Laška told Czech Television (ČT) that the likely perpetrators were ethnic Czechs from the Dobronín area. “Our aim is to name the real perpetrators who committed this. We will treat their actions as murder,” Laška said.

‘For me it’s great that the Czech Republic has progressed to a point whereby when a criminal report of this type is filed, we simply take it up and conduct a thorough and routine investigation’The investigators sent the bones from the mass grave for DNA analysis and in cooperation with German and Austrian police have identified potential descendents of the deceased found in the grave. And now the police say they have the results, but will not publish them until the  investigation is concluded.

“We have saliva samples from the alleged descendents of the murder victims, whom we approached through eight prosecutors’ offices in Germany because they live in various areas. This is a 65-year-old case; therefore, it is very complicated. If they are not the descendents, we will be back to square one,” the spokeswoman for the Vysočina region police, Dana Čírtková, told parlamentnilisty.cz. She added that the final results of the investigation should be known this year.

“We have already received a conclusive report from the Institute of Criminology. As agreed with the state prosecutor, we will comment on the whole matter after the case is concluded, which should be at the end of December. It should then be clear if the remains are of the Germans that were supposedly the victims or not, and whether the case will be heard in a criminal court,” Čírtková told the server.

Since the collapse of the communist regime and the opening of the country’s borders, concerns have arisen in the Czech Republic about attempts by Sudeten German organizations and right-wing German and Austrian movements to politicize the issue of the persecution and expulsion of ethnic Germans from Czechoslovakia, some with the aim of seeking the repatriation of property. Nevertheless, some Czechs argue that recognition and accurate documentation of crimes against ethnic Germans is necessary for a correct historical record and permanent reconciliation.

“For me, it’s great that the Czech Republic has progressed to a point whereby when a criminal report of this type is filed, we simply take it up and conduct a thorough and routine investigation as it should be done, that’s to say just like the investigation of a murder that has happened now,” historian Ondřej Matějka told ČT earlier in the year.