Czech graphic artist Kája Saudek, the twin brother of world-famous photographer Jan, finally gets his due with new Prague museum 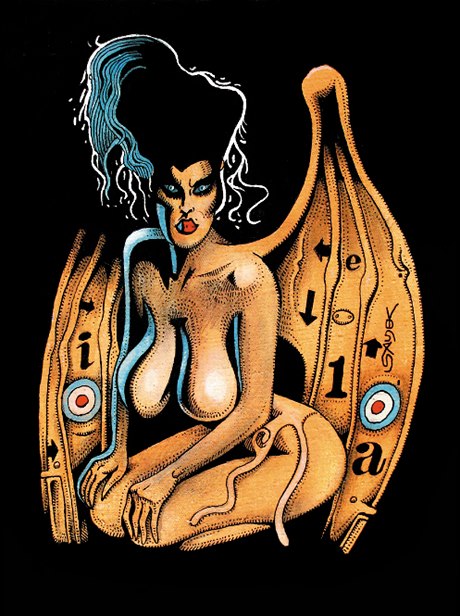 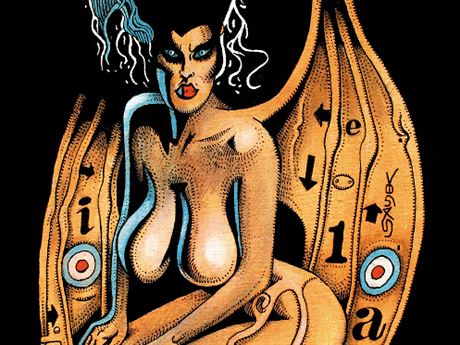 The artistic style is unmistakable to Czech eyes: cowboys, aliens, machine gun-toting gangsters, stylish super cars and an abundance of scantily-clad, big-breasted women. With the opening of Kája Saudek Comics Museum off of Prague’s Wenceslas Square, the artist’s work will gain the increased international exposure that communist censorship and post-1989 commercialization prevented him from attaining.

“The museum is the first step of our initiative to introduce Saudek to a wider audience,” the artist’s daughter, Berenika Saudková, told Czech Position, adding that it will also serve as a litmus test for Saudek’s international reception.

“I believe he will be received in other countries as positively as he has been at home where the comic genre has never been considered art.”

The idea for the museum arose after Saudková decorated the interior of the rock club Batalion entirely in her father’s comic style. Three years later the museum has opened containing over 90 artworks as well as photographs of the artist.

The 76-year-old twin brother of internationally celebrated Czech photographer Jan Saudek, Karel ‘Kája’ Saudek’s aesthetic shows the powerful influence of American comics. Far from being mere adulation or imitation, though, Saudek injects more than his fair share of satirical wit into the images of muscular heroes and buxom babes. One of the funniest panels exhibited in the museum is a mock back-page comic advertisement which says, “If you read this motto you win!”

Even the names Saudek chose for his characters typify the amused reverence he felt for American comic culture – Lips Tulian, Superhana, Honza Hrom (Johnny Thunder). Yet according to Berenika Saudková, her father detested the communist regime so much that he gravitated towards an idea of the West as a paradise. “When I was a little girl, he used to tell me not fairy-tales but stories about the world behind the western border, mainly about the States.”

The exception for Saudek as it was for many cultural figures in communist Czechoslovakia was the short period leading up to the Prague Spring. This wasn’t only the period of his best-known comics and magazine work but of the movie posters he illustrated that have become famous in their own right.

Saudek’s movie posters are as singular as his comics, and the museum has a good selection of them on the walls. It is no surprise to find that Saudek did a poster for the ‘60s cult classic Barbarella, a raunchy, cartoonish film starring Jane Fonda that seems tailor-made to his artistic sensibilities. Other posters include some Czech as well as international films from the late ‘60s through the ‘70s that government censors permitted to be screened.

Saudek’s biggest achievement in connection with film went beyond merely doing the poster. For the 1966 science-fiction film “Who Wants to Kill Jessie?” (Kdo chce zabít Jessii?) about a character being transported out of a comic book into the real world, Saudek created some of the comics used in the film, examples of which the museum also has on display. The success of “Jessie” pushed his career to another level, only for the eventual clampdown following the Warsaw Pact invasion of August 1968 to put an end to this short-lived opportunity to create in relative freedom.

The Velvet Revolution should have been a boon for Saudek’s artistic reputation, allowing him access to Western and Czech audiences alike. Instead, Saudková said, her father’s work became buried under “an unbelievable avalanche of imported entertainment” and the inclination to reject everything Czech for a “superior” foreign alternative deeply embittered the artist. In 2006, an accident put Saudek in a coma and for the past few years he has remained in hospital care.

Saudková recounted how an American friend of hers brought some Saudek comics to a comics store in the US to check what the artist’s status was. The comic store employee initially assumed it must be the work of a new, young comic creator he had never heard of. When he discovered that the comics were almost half a century old — and had been created without hope of publication because of censorship — he was stunned.

Hopefully, the obscurity into which the rises and falls of 20th century history have plunged Saudek’s exuberant comic art is finally beginning to clear and he will take his place among the pioneers of an increasingly respected art form.

“Unfortunately, my father was born in the wrong place at the wrong time. He spent his childhood during World War II and most of the rest of his life under the communist regime. Now that he is old he will hopefully win due recognition at last.”

In another sense, Kája and Jan were quite fortunate. While along with nearly 150,000 other Jews, most of their family was sent to the Theresienstadt (Terezín) concentration camp, the Saudek brothers were among the fewer than 200 children who survived internment in the special Nazi camp overseen by the notorious Dr Josef Mengele, who studied and experimented on twins.