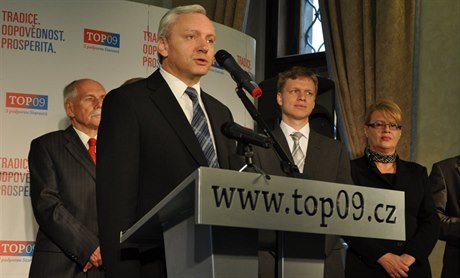 František Laudát (forefront) certainly didn't know he had a wider audience in parliament when speaking about the situation in the Ministry of Transport foto: František Laudát - Facebook, Česká pozice 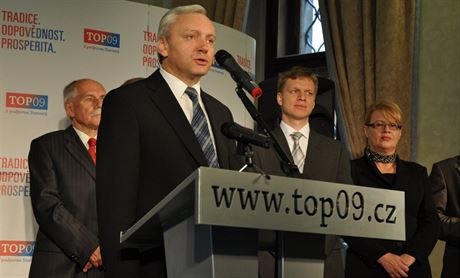 Unaware the whole house was listening in and his microphone on,  lower house member of parliament František Laudát (TOP 09) told Zbyňek Stanjura (Civic Democrats, ODS) that Public Affairs (VV) de facto leader, Vít Bárta, was attempting to “bag cash” from the transport ministry. He added that a proposal under discussion on roadside ads was dictated by lobbyist Roman Janoušek. Bárta has dismissed the claims as “stupid gossip.”

Laudát’s inadvertent public comments to the head of the Civic Democrat's group of MPs during a break in the debate ran as follows: “But that Bárta is searching there….you know what goes on in transport. That mess there is still going  on and he’s putting pressure on [Transport Minister Pavel] Dobeš, blackmailing and threatening him….basically they want to bag themselves some cash.”   The comments on Tuesday were also being recorded.

Laudát's observations came as the lower house discussed a motion to soften an amendment to a proposed law which, under its orignal format, would have banned all billboard ads besides motorways. A supplementary motion also put to the house on Tuesday called for advertising to be allowed on digital information panels sited on motorways and for billboards currently in place to be allowed to remain until the valid contracts between ad agencies and clients expire.

“Business for [lobbyist Roman] Janoušek is being set up there and apparently… it’s pretty tough with those adverts,” Laudát can be heard saying on the recording.

On Wednesday, Laudát attempted to distance himself from his own misdirected comments .“I simply said what had been brought to my attention,” adding that he had no evidence to back up the claims he made. “I just want fair laws to be passed and for the same conditions to apply to everyone,” Laudát told the daily Lidové noviny.

On Thursday Czech Position spoke with Laudát, who initially didn’t want to comment at all about his inadvertent claims but then said he was simply attempting to draw attention to speculation among some MPs about the amendment to the road law. “It’s been said that the law stinks,” Laudát said. However, the TOP 09 MP appeared  afraid to speak about Janoušek. “Under no circumstances do I intend to talk about Mr. Janoušek,” Laudát said and threatened to hang up.

Transport Minister Dobeš has denied that his party colleague Vít Bárta ?who served as transport minister from July 2010 until April 2011 when he was forced to resign ? has put any pressure on him. “In the ministry I take steps which I myself decide on, and I then take responsibility for them, even if it can meet with an opposing stance in our party,” Dobeš told the server idnes.cz on Thursday.

“I think that in the seven months I’ve been in the ministry I’ve managed to do a range of things, though of course people make mistakes and not everything works out. Now when someone describes me in such a way it bothers me and I’m surprised by it,” Dobeš added referring to Laudát’s claims.

Dobeš also said that it was not his ministry who proposed allowing advertising on motorway information panels. “I guarantee that no motion from a lobby group was put forward by me,” Dobeš said, adding that the motion in question came from the lower house’s economy committee. “I defended the government’s proposal which was the strictest option,” Dobeš added.

On Wednesday the  government proposed ban was passed and the motion to allow advertising on information boards rejected.

On Thursday Vít Bárta, who next month is due to appear in court on corruption charges, dismissed Laudát claims about his pressure.  “I can’t describe what Mr. Laudát said as anything other than very stupid gossip. I refuse to speculate why he said it. I’m very sorry that such gossip spreads around the Chamber of Deputies,” Bárta told idnes.cz.

Katarina Zgúthová contributed to this article