Mistral Café: no delusions of grandeur

The downtown café/restaurant must have been conceived, from the interior through the menu to the prices, by someone really smart. 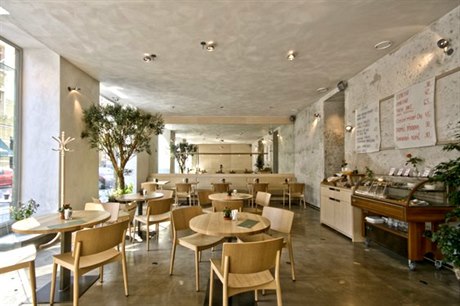 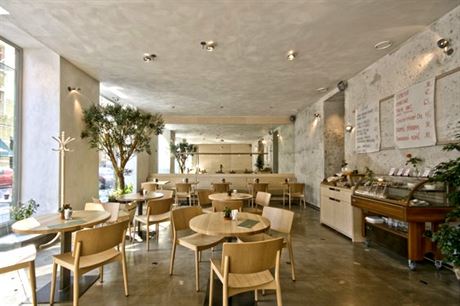 A few years ago, in the food column of a weekly we wrote about designer and architect Bořek Šípek’s Thai restaurant Arzenal, which, as many of you might have noticed, has disappeared from Prague’s culinary map. We afforded the outlet that is located in the same place today — Mistral Café — some time to take off and eliminate any possible initial complications, nevertheless, now we decided to find out what it is like.

At first sight, from the door, it is clear that its concept was devised by someone really smart. It has an airy, light, spacious interior without any disturbing elements where you can have a working breakfast or lunch, a family gathering or a chat with a friend. Children can head for the pleasant play corner abounding in natural materials, while smokers have a separate section of their own to indulge their vice.

Even in the middle of winter, a green shrub kindly waves at you from the protected backyard through the glazed wall, and this comforting effect of nature continues in the inside too — owing to flowerpots with herbs and, above all, the high-grown olive tree, a sort of guarantor of the restaurant’s name, into which in other latitudes the said mistral blows.

Some may say that a similarly empty space is boring and sterile, yet upon closer inspection there is definitely much to admire: be it the interesting cast floor with incrustations of mosaic, the huge mirror with a handrail as though cut out from a ballet hall, or the simple furniture made of light wood.

The walls provocatively admit crude concrete, the tables are during lunch time characteristically covered by wrapping paper, yet standing on them are slender glass vases with a twig of immortelle or a live flower. We will see whether the food is as tasty.

The menu is also compiled intelligently, simply, but, at the same time, with a sense of variety. The offer of wines and beverages is pleasant too.

The tomato soup immediately hit the spot — a great balance of flavors with big cheese-filled pieces of ravioli filled and garnished with basil leaves. The ragout from forest mushrooms with thyme and onions, served with a potato pancake, passed the test as well, but when it comes to the potato pancake, we expected a real, dry-roasted, a la grandma pancake from shredded boiled potatoes, not two fat, fried croquette-type pieces (at least they were made from real mashed potato though).

The generously portioned pumpkin soup has a beautiful orange color and emanates the heady odor of ginger. It is so thick that you can stand a spoon up in it. The soup also contains a few bits of pumpkin, pieces of golden grilled chicken breast, a sprig of leaf parsley and a few drops of olive oil. It definitely belongs in the category that at the Savoy café is called restaurant, meaning it serves for recovery of physical strength.

Unless you earn your living working on a building site, we recommend the soup not as a starter but as a main course in itself. The only gripe was the excessive saltiness. Were it not for this fact, the soup would have tasted even better than its carrot sister at the Savoy.

By the way, the Savoy invites comparison all the time, and we must say that it does always emerge from the duel as the winning party. Although Mistral Café does not have such a beautiful ceiling, the guest, at least in our case, cannot shake off the feeling that the atmosphere here is much more agreeable: they don’t play at being a “superior establishment.” The service is friendly, and so are the prices.

The next dish we ordered was svíčková na smetaně — beef sirloin in cream sauce — served with homemade dumplings and cranberries for a reasonable Kč 149. In visual terms, it was a masterful composition. Approximately two-centimeter slices of meat were properly interlaid with bacon (unfortunately a little more stiff than desirable), yet the dazzlingly orange-colored sauce was not warm enough. The round dumplings look about the same as the yeast fruit variety, but after cutting into them it appeared that they were dry and —again — stiff.

It is a pity, despite being evidently handmade the product did not impress us. The cranberries were really huge (certainly not from the forests of Bohemia) and a bit drier than is usually the case. Although, as a whole, it was a decent Czech standard dish, to our regret the potential was not used to the full.

The slightly tarnished impression, fortunately — as in so many cases previously — was repaired by the dessert: a hot chocolate cake cleverly combined with marinated sour cherries accompanied, in addition, by very nice cup of coffee with genuine whipped cream, a mug of warm milk and a glass of water (we have of late been served water much more often than, let’s say a year ago, which is a welcome trend).

For our lunch we paid Kč 639, which considering the location and the amount we had put away is pretty reasonable. Although Mistral did not completely knock our socks off, we will definitely be going back there again. Unlike Café Amandine, an establishment we wrote about recently, it does not make much pretence and, instead of marketing, it has bet on quality. That was our impression at least this winter.

Message for the guests: The restaurant’s clearly positive factor is the cultivated modern milieu, friendly staff, good desserts and drinks, as well as some dishes, the soups in particular. Given the location in the center of Prague, at a very pleasant price.

Message to the management: The potential afforded by the svíčková na smetaně could definitely be made use of better. And one more thing (at least the winter is coming to an end): We were unpleasantly surprised by the low temperature inside, which is even lower when you sit by the large windows (unfortunately, the back, warmer and perhaps cozier, room is set aside for smokers).