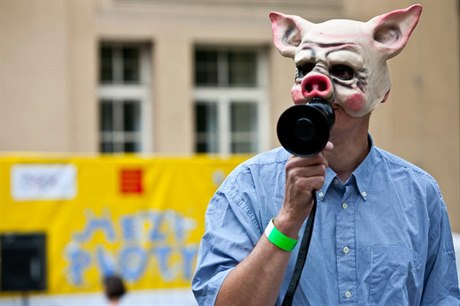 The grounds of the Bohnice mental hospital open to the public for the Mezi ploty festival of music and theater foto: © Mezi ploty, Česká pozice 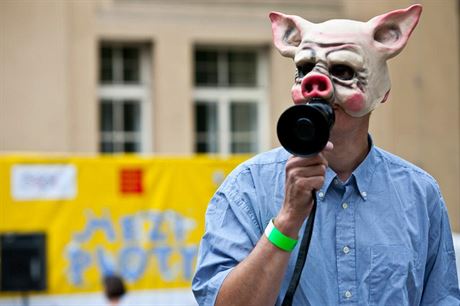 Practically every weekend there is one music festival or another in and around the Czech capital. Mezi ploty stands out from the pack because it is held on the grounds of the mental health hospital in the Bohnice district of Prague 8. The two-day festival, held on May 26 and 27, attracts some of the country’s most popular bands and dramatic companies to its three music stages and six areas for theater and book signings.

The festival — with a name that translates to “between the fences” — began in 1992 as a rather small affair, with a goal of bringing patients into contact with the general public. “When the idea arose to start organizing Mezi ploty there was a strong sense of idealism, community, reciprocity and humanity. These are now in decline,” festival organizer Robert Kozler told Czech Position.

“People felt the need to be somehow useful. And this somehow naturally led us to an asylum. The hospital has a feeling of genius loci. We wanted to highlight this,” he added. The grounds also have a lot of space to allow for many things to be going on at once without sounds from one area drowning out another.

Some 40 bands are in the lineup. Showing how the festival has grown into the mainstream, the stages now have corporate sponsors: bank Česká spořitelna, Czech energy grid operator ČEPS and auto maker Peugeot.

The Česká spořitelna stage has a bit of a zoo theme on May 26, although it is probably just a coincidence. Early on, rock band Medvěd 009 (Bear 009) plays, followed later by ska-influenced band Sto zvířat (One Hundred Animals). The closing act is Žlutý pes (Yellow Dog), a rock band that dates back to 1978. Žlutý pes is fronted by journalist and TV personality Ondřej Hejma. In between these animal acts are other bands ranging from big band musicians Ondřej Havelka and His Melody Makers to Sunflower Caravan, a 1960s-influenced psychedelic rock band.

That same stage presents another diverse but animal-free assortment next day. Vltava was formed in 1986 and after splitting up in 2003, got back together in 2010 with a slightly different lineup. Toxique is a more recent group of art rockers that is equally concerned with music and fashion.

Rapper Vladimír 518, who is also known for his interest in Normalization-era architecture as well as moderm street art, performs with Tereza Černochová. Rock band Chinaski, which began in 1987 as Starý hadry, changed its name in 1994 after falling under the influence of writer Charles Bukowski. They close out the festival.

The ČEPS stage has a bit of World Music sound on May 26, with Romany band Gipsy.cz, the African rhythms of Yellow Sisters and Latin sound of Marta Töpferová. The next day it welcomes indie bands Niceland and Mother’s Angels, as well as reggae singer Michal Šeps and hip hop band Cocote Minutte.

A mixed bag can be found on the Peugeot stage on May 26, ranging from Balkan influenced Traband to Romany band Gulo Čar and ska band Tleskač from Plzeň, West Bohemia. Some legends of Czech music play the next day, including Plastic People of the Universe, the band that was at the center of the underground movement during the 1970s.

Another band that dates back as far, Radim Hladík and Blue Effect is headed by a virtuoso guitarist. The band was forced to play instrumentals when communist-era censors refused to approve their lyrics.

Jablkoň has been around since 1977, although only one original member remains. Jablkoň in the past has performed with symphonic orchestras and acrobats. Another veteran in the lineup is Už jsme doma, which formed in Teplice, North Bohemia, in 1985.

A space to emote

Theatrical presentations make up a large part of Mezi ploty. While most of it won’t be very English-friendly, Kozler recommends it for those with sufficient language skills. “My favorite theater troupe, divadlo Sklep, is returning after 15 years. They opened the imaginary gates of the first festival in 1992,” he said. They played in 1997 as well. “It was an extraordinary theatrical experience.”

He is also looking forward to an appearance by actor Pavel Liška, who was in the festival audience last year. He will perform “Milostný trojúhelník” (Love Triangle) with the help of some fellow thespians. One theatrical presentation has Kozler particularly excited. “And for the first time in the history of the festival there is a visit from the National Theater. It is indeed time, and I am very happy.” he said.