Antonio Riestra, winner of this year’s Goya for best cinematography, found his way to the upper levels of his craft by way of Prague 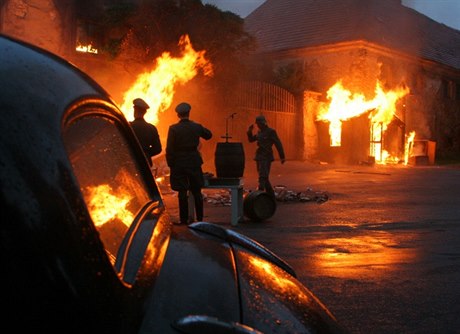 A village is destroyed out of retribution in “Lidice,” one of Riestra’s most recent films, was directed by Alice Nellis foto: Česká pozice 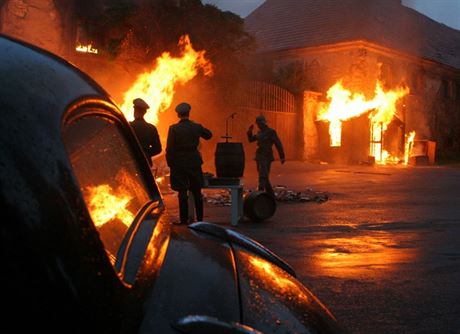 Agustí Villaronga’s “Black Bread” (Pa Negre), kicked off this year’s La Pelicula Spanish film festival in Prague on Feb 15. with both the director and the film’s cinematographer in attendance. But while Villaronga flew in from Spain to make an appearance, his director of photography, Antonio Riestra — who had worked in Mexico on “Amores Perros” and “Frida” — was able to reach the festival by tram, having relocated to Prague about four years ago.

Just two days before the start of the festival “Black Bread,” a coming-of-age drama set after the Spanish Civil War, swept Spain’s Goya film awards with nine wins, including Best Film, Best Director and a Best Photography award for Riestra.

Although Riestra’s had been working as a DOP for around 10 years, it was when he came to Prague that his career underwent a major change. Prior to the move he worked mostly on commercials and second units. “You learn a lot shooting a commercial, but it’s not telling a story. It’s a totally different thing,” Riestra told Czech Position.

He was given his first opportunity to head the camerawork on a feature film for Julius Ševčík’s story of the Düsseldorf ripper, “Normal,” released in 2009. Since then, not only has he gone on to shoot  a number of Czech features and shorts, but his success has taken him back into the international arena with his work on the prize-winning film of murder, conflicted family loyalty and Spain’s haunted past.

Riestra had worked in Mexico on prestigious productions such as “Amores Perros” and “Frida,” among others. While acknowledging that the Mexican film business is a bit larger than the Czech one, Riestra thinks that the number of large productions shot here might outpace Mexico as US film production has moved to other locales over the past two decades.

As to whether he would like to shoot a big studio films, Riestra did not hesitate to reply:  “Every DOP would like to do big films, so of course I’m interested in shooting studio films eventually, but it’s not my main thing. I like telling stories and meeting directors and working with my friends.”

Besides the world-class performances, what really holds “Black Bread” together is a consistent atmosphere, due in a large part to a very specific visual style.

“From the beginning we wanted to be very close to the actors. So that’s the reason we chose to shoot the film mostly hand-held; about 80 percent of the film is hand-held,” Riestra said. The effect of this camerawork is particularly evident in some of the scenes in the forest, such as the chilling opening as well as when the film’s 11-year-old lead, Andreu, spots a consumptive boy who lives at the local monastery running naked through the trees.

The film’s lighting is another striking feature that builds up a sinister, threatening atmosphere that sometimes encloses on the characters’ lives. The actual lighting in the family’s house was a single light bulb that had to be moved from place to place. This then required them to add a significant amount of lighting from other sources.

“Basically, he [Villaronga] didn’t ask me to justify the lights and where they were coming from, so somehow we decided that all the nights were going to be full moons … There was a scene where the Civil Guard comes to arrest the father and the only window there was 60 by 80 centimeters and we decided there’s no way were going to justify the light so we just lighted it and created a feeling,” he said.

Filming in the Czech Republic

Riestra’s two most recent films are “Lidice,” directed by Petr Nikolaev, and “Czech-Made Man” by Tomás Rehorek. “Lidice” is the story of a Czech village massacred and destroyed by the Nazis in retaliation for the assassination of acting Reichsprotektor Reinhard Heydrich in 1942. The day he spoke to Czech Position Riestra had just completed the color grading on the film, which is due to be released in June 2011.

After two films with dark historical backdrops, “Czech-Made Man,” a black comedy about a self-made Czech businessman scheduled for release on April 28, 2011, proved to be a welcome change of pace.

“I was very happy to switch from drama to comedy,” Riestra said. Though doing a comedy might seem less of a challenge than the visually charged dramas he had worked on he insisted that the 23-year old director went for a striking visual style that made for an extremely interesting shooting experience.

“I found him very open to all the craziness you can make with lights so we made a very colorful film. We put a lot of gels [on the lights], combined a lot of things and really created an atmosphere that is very interesting,” he said.

Riestra is in the process of learning to speak Czech; he relies on the crew he works regularly with here, with whom he speaks in English. Ironically, there was also a language barrier on “Black Bread,” since the film is in Catalan. “Catalan is so close to Spanish that in the first month I was beginning to catch things, but by the second and third month of shooting I understood everything,” he said.

When he shot “Normal” Riestra admitted that he couldn’t understand any of the Czech dialogue and relied on his knowledge of the script. “Now, in the last film I shot I started really understanding the dialogue,” he said.