Medvedev to raise missile defense and Temelín during state visit

Missile defense will be discussed during Dmitry Medvedev’s visit to Prague, but trade – mainly the Temelín tender – tops the agenda 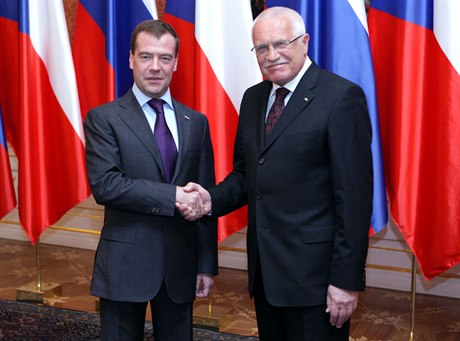 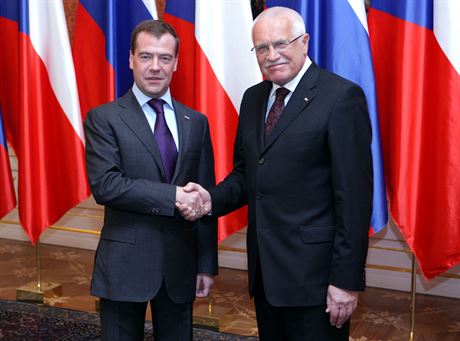 US-led NATO plans to build an anti-missile defense system in Europe, the European financial crisis, EU-Russia relations, and the Arab uprisings are among the issues that Russian President Dmitry Medvedev wants to discuss while in Prague, the ČTK news agency reported Tuesday, citing the Russian ambassador to the Czech Republic. Nevertheless, trade relations are expected to dominate talks.

“I don’t want to go deeper into these questions now, but time will be given for the discussion of this issue during talks,” Russia’s ambassador to the Czech Republic, Sergei Kiselyov, told ČTK, referring to NATO’s plans to build an anti-missile defense system (AMD) in Europe. Kiselyov added that Moscow’s position on AMD in Europe is “well known” in Prague.

Under the presidency of George W. Bush, the US drew up plans to establish an AMD system in Europe, ostensibly to counter potential threats from “rogue states” including Iran and North Korea, with anti-missile rockets to be based in Poland and an early warning radar system in the Czech Republic. The plans were fiercely opposed by the Russian leadership which claimed the system was also intended to neutralize Russia’s missile arsenal.

The US plans led to deterioration not only of US-Russia relations, but also of Moscow’s relations with Prague and Warsaw. Soon after taking office, US President Barack Obama announced that Washington was scrapping the AMD plan, which led to a certain détente in bilateral relations and paved the way for the New START treaty, signed in Prague by Obama and Medvedev in April 2010.

At the NATO summit in Lisbon in November 2010, NATO provisionally approved plans to build a revised AMD with a degree of cooperation with Russia. Moscow has proposed building a joint NATO–Russia AMD system, but the US and NATO rejected the idea.

Medvedev threatened that Russia is ready to withdraw from the New START treaty if NATO went ahead with the AMD project unilaterallyThe US and NATO partners have, without Russian involvement, forged ahead with plans for a revised AMD system in Europe which NATO claims will be should be able to respond to potential threats from the Middle East. The US has reached provisional agreements with Turkey, Spain, Poland and more recently Romania on hosting parts of the planned system which will include mobile seaborne elements.

After failing to reach an agreement with the US or NATO on participating in the system, Moscow has demanded legally-binding guarantees from the alliance that the system will in no way be used to undermine or counter Russia’s defenses. NATO has so far argued that such a guarantee is both unnecessary and technically impossible due to lack of a legal framework.

“The demand for a legal guarantee is not necessary. As stated clearly in the new NATO Strategic Concept, ‘NATO poses no threat to Russia’ and there is a desire to create ‘a true strategic partnership between NATO and Russia.’… NATO is not in a position to sign a legal document of this nature,” Deputy Minister of Defense, Jiří Šedivý, told Czech Position in June this year, explaining NATO’s stance.

Two days after Russia’s permanent envoy to NATO, Dmitry Rogozin, said that talks on potential AMD collaboration had reached an impasse because the US had rejected all Russian proposals, on Nov. 23 Medvedev threatened that Russia is ready to withdraw from the New START treaty if NATO went ahead with the AMD project unilaterally without providing Moscow guarantees. Medvedev also said Russia is prepared to deploy Iskander ballistic missiles in Kaliningrad, the country’s westernmost region, and on its southern borders.

The thorny issue of missile defense aside, Russian ambassador Kiselyov says the main focus of talks in Prague will be cooperation on bilateral trade. Representatives from the Russian and Czech defense ministries are due to sign an agreement whereby the LOM aircraft repairs company in Prague will be allowed to carry out modernization, repairs and maintenance on Russian-built Mi helicopters belonging to foreign militaries and companies. Hitherto, LOM has been licensed to work only on Mi helicopters owned by the Czech military.

The two sides are due to sign an agreement on the modernization of industries in Russia and the Czech RepublicThe Russian nuclear fuel producer and provider TVEL, which supplies the Temelín nuclear plant in South Bohemia, and the Czech firm ALTA Invest are to sign an agreement on the establishment of the Technical Services Center, which according to ambassador Kiselyov should enable the exchange of technologies for civil nuclear applications, including power generation.

On Tuesday, Rossiiskaya Gazeta, the official daily of the Russian government, reported that the bid by the Rosatom-led Russian-Czech consortium to build two new reactor blocks at Temelín will be one of the main themes at the talks in Prague. “Temelín is one of the largest nuclear power plants in Eastern Europe and the winner of the tender can count on successful participation in similar projects in other Eastern European countries,” the daily said.

The two sides are also due to sign an agreement on the modernization of industries in Russia and the Czech Republic provisionally endorsed in Prague on Nov. 11 by Russian deputy prime minister Alexander Zhukov and Martin Kocourek (Civic Democrats, ODS), who resigned as Industry and Trade Minister last month.

The Czech Ministry of Industry and Trade told Czech Position that it could not reveal details about its involvement in the Russian president’s visit because it is being organized by President Václav Klaus and not the government.

Medvedev is visiting Prague upon the invitation of Klaus. Following his arrival in Prague on Wednesday evening, Medvedev and his wife, Svetlana, are to dine with the Klaus and his wife, Livia, at the Strahov Monastery nearby the Prague Castle.

The Czech and Russian presidents will reconvene, together with their national delegations, at Prague Castle — the seat of the Czech presidency — at 11:00 am on Thursday, which will be followed by the signing of treaties and a ceremonial banquet. The Czech presidential administration declined to issue a list of names of the Czech delegates expected at the talks, but told this publication that around 150 people have been invited to attend the lunch banquet on Thursday. Those due to attend include the Czech ministers and their deputies, Klaus’ spokesman said.

At 16:10 on Thursday, Czech Prime Minister, Petr Nečas (ODS) is to meet with Medvedev at Prague Castle, after which the Russian head of state and his wife will leave for the airport.