Meda Mládková: From Kupka to Kampa 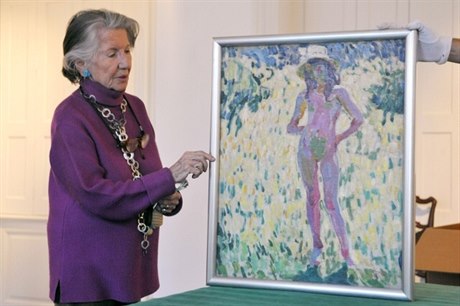 Meda Mládková at the unveiling of new paintings for the Kampa collection foto: © ČTK, Česká pozice 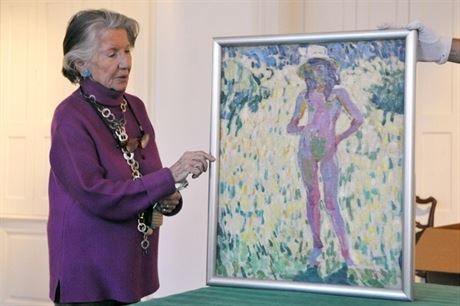 It was in Paris in the 1950s when Meda Mládková, the art patron behind Prague’s Museum Kampa, purchased her first painting by renowned Czech abstract artist František Kupka.

Now in her early nineties, Mládková recently enriched the museum’s Kupka collection (which she and her husband, Jan Mládek, endowed to the Czech Republic along with a collection of central European art after 1989) by adding 44 works she purchased at the end of 2011. Besides Kupka’s work being one of the first pieces of her collection, it was also his work that fostered her appreciation for art in general.

“I was not interested in art, can you imagine? I was studying economics [Mládková earned her PhD in Economics in Geneva before going to Paris]. My family didn’t have a collection; we had some paintings like everybody had — surely nothing important, nothing interesting. So I was not really involved in art at all,” Mládková told Czech Position.

“And then my husband, my [then] future husband, one day got a painting from a famous antique dealer in Paris — he was a friend, he brought him [her husband] a painting and said, ‘look it’s not a great painting, I bought it at an auction at a very cheap price, but this man [a Czech] will one day be very famous.’ So I was curious, who this Czech was who will one day be very famous.”

That man of course was Kupka, and Mládková scoured the city until she found him and then visited his studio. “Ahh. I was absolutely taken.” Kupka in a sense made her fall in-love with art. “He opened my eyes and my heart and my soul to art.”

Mládková, born in 1919 in Zákupy, spent more than half of her life in exile. After her time in Switzerland in the 1940s, followed by her years in France where she studied art history at the Sorbonne and the L’Ecole du Louvre, she moved to the United States with her husband in 1960. Mládek was sent to Washington, D.C. by Czechoslovakian president Edvard Beneš to help in the adoption of the Marshall Plan. He was one of the governors of the International Monetary Fund (IMF).

“My husband was much more of an art connoisseur than I was. His office was full of Kupka’s [works]”

It was their love for their country, and Mládková’s husband’s notion that if the culture survives, the country will too, that fueled the birth and growth of their collection. In 1967, after 19 years, Mládková returned to Czechoslovakia. Beyond impressed by the art that was being created behind the Iron Curtain, Mládková made the rounds to tens of artist’s studios and then organized an exhibition at the Hirshhorn Museum in Washington to give the artists an opportunity to have their work exposed beyond the borders.

“It was called Expressive. Still today, sometimes I meet people and they say, ‘Oh you did the show Expressive’. It was a very famous show.” After the show’s end, Mládková and her husband were asked to purchase the works. “They [a group of Prague delegates] came and said ‘listen it cannot come back, we will reduce the price, will you please buy everything, because the artist may be in a bad position.’ So they gave it to us at a cheaper price. So we bought the whole collection and this is where the collection started, really.”

This Central European art collection also included works from Polish, Hungarian and (then) Yugoslovian artists from the 1960s and ‘70s. Mládková visited artists in those countries as well. However, after that time, she was unable to return to her country until after the revolution in 1989. Two months before her husband died. It was in that same year that Mládková made the decision to give their collection to their country.

Today, housed inside the Kampa Museum, which rests on the banks of the Vltava in the former Sova Mill, that collection includes over 2000 pieces, including 17 works from sculpture Otto Gutfruend, over 240 pieces from Jiří Kolář and 259 from Kupka, including the recent addition, which along with paintings and drawings, including his letters and other documentation.

“[The work reflects] artists that couldn’t speak, artists that couldn’t travel; this gives atmosphere to the whole museum, says Mládková “People like the museum because they understand what the artists wanted, what they hated. This is what you feel in our museum; this is what people like.” ‘I brought it home and I was sitting for hours in front of the painting, hearing Dvořák music.’

Among the museum’s Kupka works is that first small painting that Mládková purchased in Paris from the artist directly. She paid about $150 U.S dollars. “I brought it home and I was sitting for hours in front of the painting, hearing Dvořák music,” she says. “And then later when I studied Kupka, when I started to really understand Kupka, he really did always paint with this music.”

Today, Mládková divides her time between Prague and Washington. Although she takes great pleasure in her home in the U.S. and has an appreciation for the country, she feels her true home is in the Czech Republic, “I like America, I’d admire America, but I belong here.”

Of her husband, who felt the same way, but of course never had the chance to return, she feels he’d greatly appreciate Museum Kampa: “I think he would be very happy. I do believe in a second [after] life so I am sure he is looking somewhere and saying ‘Thank you, Meda.’”