Raisin-filled breads (maybe topped with almonds) and cakes shaped like lambs (perhaps coated in chocolate)? It must be Easter. 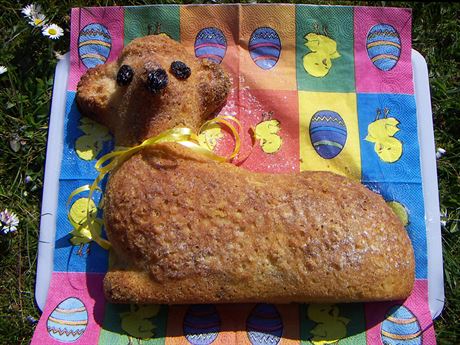 Baked goods in some form or other are staples of Easter traditions across Europe. The Hungarians have fonott kalacs; Italians have colomba pasquale, and the English have their hot-cross buns.

Here in the Czech Republic, the two classic Easter baked goods are mazanec and beránek. Apart from sharing some connections to other European customs, these two foods can lay claim to centuries of tradition.

Mazanec is a sweet, though not cloyingly so, bread filled with raisins and often topped with almonds. Beránek is a cake baked in the shape of a lamb. Many commercial varieties are covered in chocolate.

The tradition of baking lamb shaped sweet bread extends even further back in time. It is claimed the Jewish people of ancient times prepared bread in the shape of a lamb.

The basic ingredients of mazance haven’t changed much. It is made from flour, yeast, milk and eggs. Rettigová’s version called for sweetened cream and grated lemon rind. Today people add sugar, vanilla and sometimes nutmeg, though none of these items would have been so widely available centuries ago.

Mazanec probably got a foothold into the culture because it and similar breads were cheap festive dishes in the past. In Czech history the bread had a strong association with poorer families. The food was a treat, but it wasn't too extravagant.

The beránek, while older, has undergone more changes. The more recent chocolate coated sponge cake varieties would have been unrecognizable to Jewish people thousands of years ago or Czechs of the late Middle Ages. Yet, when one is properly prepared it has an obvious visual appeal and its symbolism makes it an attractive center piece on the Easter table.

The enduring popularity of both no doubt also stems from people’s love of baking and baked goods, especially when they are prepared by family members. These simple traditions reinforce those family bonds, especially when a recipe has been handed down.

Who bakes and who buys is not an easy question to answer. Simona Caidervá, a spokesperson from Albert supermarket, said that sales of flour were up three times at this time of year compared to the rest of the year. On the other hand, Ivana Benešová from Michelský bakery said that demand for both mazanec and beránek had been stable through the last years.

From these comments it can be assumed that the tradition is still strong but perhaps not growing. Anecdotal evidence from among friends and colleagues suggests that it is a task left by and large to mothers and grandmothers. For this reason we spoke to a couple of them.

Ellen Barová said that she baked her mazanec based on a recipe from a famous cookbook by Marie Janků-Sandtnerová, a Czech food writer from the early twentieth century. This recipe was also used by her mother and grandmother.

Jitka Hošková describes herself as not being “a true Czech housewife” who reveres tradition. “I think that this has something to do with the fact that I'm not a religious believer,” she said. Despite this admission, her family always has mazanec, beránek and colored eggs at Easter. It is a tradition she has maintained since childhood.

Her mazanec is based on recipe from a friend because she prefers it to her family recipe. The beránek is bought from the shop, though this was not always the case.

“My mother had a baking tin for the beránek and she baked in it a cake from normal sponge batter and almost always it came out nicely. [The beránek] got a ribbon around its neck. It was lovely and it decorated our household,” she said.

“After moving out of home I took the baking tin with me and the beránek was always without a nose or the nose was burnt. Then I stopped with it and I have been buying them in the shop,” she added.

You don’t have to settle on shop bought versions. Radek Jakubec from ChefParade spoke with Czech Position to give us some tips for people planning to try mazenec or beránek.

“I wouldn’t recommend instant yeast, actually I recommend fresh yeast because it works better. With the fresh yeast you have to work very carefully to not kill the organism, so it shouldn’t be put in really hot milk. The milk should only be about 55ºC,” he said.

“We can also do the mazanec one more way. We call it jidáš. It’s smaller. It is the same dough though. My mother does it every Easter in many ways and shapes,” he added.

To get the golden brown shiny top, he suggested brushing egg five minutes before you take it out.

As for the beránek, he recommended using typical sponge-cake batter, though nowadays sweet and savory version is popular. “I was at a competition where there was a beránek made from caramel. It was very good,” he said. Another idea of his was to fill the cake with cottage cheese.

The only important thing as far as preparing beránek was concerned was to have the mold. “Then you can do anything you,” he said.

What about hot-cross buns? Is this popular English version of Easter fruit bread making in roads?

Supermarket chain Albert hadn't noticed any growth in demand for hot-cross bands. Caiderová explained the reason was the food had no tradition here. She also affirmed that the popularity of mazanec and beránek had remained constant in recent years. When you have someone willing to bake them for you, it’s easy to understand why.