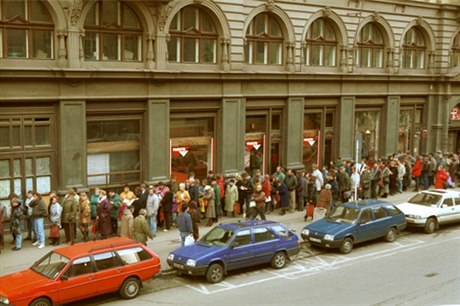 Czechs line up in January 1993 to trade in their share booklets in state companies slated for privatization under the ‘coupon privatization’ program foto: © ČTK, Česká pozice 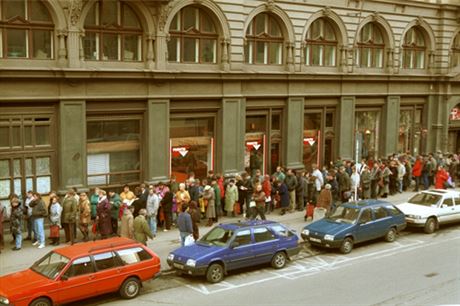 The aim was to guarantee a swift — and irreversible — transition to capitalism for the countries formerly behind the Iron Curtain. But rather than ushering in a new era of prosperity, the mass privatization programs advocated by an army of Western-trained neoliberal economists — and backed by local fans such as former Czech finance minister, prime minister, and curent head of state Václav Klaus — helped bankrupt Russia and other former Soviet bloc countries.

So say sociologists from the University of Cambridge and Harvard University who have published a study that they claim is the first to trace a “direct link” between the mass privatization programs of the early 1990s — adopted by approximately half the post-communist countries after the collapse of the Soviet Union — and the “economic failure and corruption that followed.”

Based on their comparisons of the fortunes of 25 post-communist countries (between 1990 and 2000) and World Bank survey data of managers from more than 3,500 firms within 24 of them, the researchers say they have compelling evidence that the more faithfully countries adopted the mass privatization policy advocated by Western economics and international financial institutions, the worse off they became: Mass privatizing states experienced an average dip in GDP per capita of more than 16 percent after implementation above those of states that didn’t follow the policy.

“Mass privatization programs, where implemented, created a massive fiscal shock for post-communist governments, thereby undermining the development of private-sector governance institutions and severely exacerbating the transformational recession,” write Lawrence King and David Stuckler of the University of Cambridge, and Patrick Hamm, a doctoral candidate at Harvard University, in the study, “Mass Privatization, State Capacity, and Economic Growth in Post-Communist Countries,” published in the April issue of the American Sociological Review. ‘This paper shows the most radical privatization in history failed the countries it was meant to help.’

The researchers say that their work, which is “directly at odds with neoliberal explanations,” builds on the findings a decade ago of a “small group of scholars who criticized mass privatization for its potential to obstruct governance,” including Gerald A. McDermott of the University of Pennsylvania, but while “consistent with institutionalist corruption-centered perspectives goes beyond them by arguing that mass privatization itself damaged existing state institutions and increased corruption.”

Apart from documenting the past, the study also carries a warning for the modern age: As recently as 2008, Egypt considered implementing a mass privatization program, distributing public company shares to some 40 million Egyptian citizens. Morocco and Tunisia contemplated similar policies following the 2011 Arab Spring and invited the European Bank for Reconstruction and Development (EBRD) to consult on the process.

“Rapid and extensive privatization is being promoted by some economists to resolve the current debt crisis in the West and to achieve reform in Middle Eastern and North African economies,” King said in a press statement, calling for the safeguarding of government revenues and state capacity to be a priority. “This paper shows the most radical privatization in history failed the countries it was meant to help.”

‘Shock therapy’ a bitter pill – and no cure

Among the champions of “shock therapy” prescription for the post-communist world — those calling for rapid mass privatization, liberalization of prices and trade, and fiscal and monetary austerity — was American economist Jeffrey Sachs, who advised a number of post-communists countries on implementing reforms. “The need to accelerate privatization is the paramount economic policy issue facing Eastern Europe,” Sachs wrote in 1992. “If there is no breakthrough in the privatization of large enterprises in the near future, the entire process could be stalled for years to come.”

Neoliberals like Sachs advanced a rationale of political expediency for radical change because “they believed that a period of ‘extraordinary politics’ following the collapse of communism gave elites a brief window of opportunity to implement reforms, after which managers and workers of state-owned enterprises might seek to halt, or even roll back, privatization and liberalization efforts in order to prevent layoffs and other social costs,” King, Stuckler, and Hamm write.

They also believed, of course, that shock therapy was the correct treatment, though a bitter pill to swallow. The EBRD 1999 Transition Report summarizes the consensus of foreign advisors and post-communist elites at the start of the transition:

“Private ownership would ensure profit-oriented corporate governance, while liberalization of trade and prices would set free the competitive market forces that reward profitable activities. Firms would have therefore both internal and external incentives to restructure.”

From the beginning, however, gradualist voices stressed the importance of state-guided institutional reform, arguing that in the absence of a supportive institutional environment, “radical reforms would be damaging: privatization might lead to asset-stripping rather than investment, and rapid reforms might create economic winners who would subsequently engage in predatory behavior,” King, Stuckler, and Hamm note.

Nonetheless, shock policy advocates won the policy debate in most countries. As Lawrence Summers put it in 1994, after stepping down as World Bank chief economist, “Despite economists’ reputation for never being able to agree on anything, there is a striking degree of unanimity in the advice that has been provided to the nations of Eastern Europe and the former Soviet Union. …  [P]rivatization, stabilization, and liberalization … must all be completed as soon as possible.”

The Cambridge and Harvard researchers say that as for mass privatization, neoliberal advocates of shock therapy clearly did not expect the fiscal shock to be particularly devastating, for two reasons:

“We argue that a post-socialist country’s choice to rapidly privatize its enterprise holdings immediately reduced that state’s financial capacity, due to high budgetary dependence on the earnings of state-owned firms,” write King, Stuckler, and Hamm, with the result being a vicious cycle of mutual reinforcement between a failing state and a failing economy.

Mass privatization (known as “coupon privatization” in the Czech Republic) was implemented by roughly half the post-communist world. It involved distributing vouchers to ordinary citizens who could redeem them as shares in national enterprises. It was adopted largely by countries that saw foreign investment as unlikely, exclusive insider ownership undesirable, but rejected management and employee buyouts as stand-alone options.

The policy proved to be the most difficult to implement of the “shock therapy” package and also yielded the greatest variance in outcomes, according to the Cambridge and Harvard researchers, who say they policy failed far and wide, for two main reasons:

Furthermore, in most cases, newly mass privatized firms were cut off from state subsidies, but unlike firms privatized to strategic owners, “they did not have access to resources such as investment capital, new managerial talent, or marketing networks … Faced with this situation, owners, managers, and workers, unable to work cooperatively for the betterment of their firms, tended to pursue short-term parasitic strategies to accumulate wealth, such as asset-stripping.”

King, Stuckler, and Hamm say, however, that the Czech Republic was a statistical “outlier” as it was one of a handful of countries that implemented the policy yet overall enjoyed economic growth and attracted a large amount of foreign direct investment (FDI). But that had more to do with its relatively strong starting point and geographical location, they say — and the relative success was not to last.

“The Czech Republic was the second-richest country in the region, owed little external debt, had a long and celebrated history of industrial production stemming from its time as the economic powerhouse of the Austro-Hungarian Empire, had a readymade pre-communist legal tradition of contract and property rights, and had a privileged location bordering Germany.

“Still, by 1999, the Czech Republic recorded the worst scores in Central and Eastern Europe on protection of property rights, government effectiveness, and rate of growth. Moreover, case-study data demonstrate that companies privatized through vouchers experienced substantial governance problems … and many voucher-privatized firms were renationalized before ultimately being sold to foreign investors.”

Furthermore, the researchers cite McDermott of the University of Pennsylvania as having demonstrated in 2002 that in the Czech Republic mass privatization greatly complicated corporate governance, causing assets to go unutilized because of ambiguous ownership situations that discouraged foreigners from investing. “Well-functioning regulatory and credit rating agencies or an independent business press might have mitigated the violation of shareholder rights, yet these institutions did not exist,” King, Stuckler, and Hamm write.

Why did the transition from socialism to capitalism result in improved growth in some countries and significant economic decline in others? King, Stuckler, and Hamm say scholars have advanced three main arguments:

“Gradualists and shock therapy advocates both claimed that the facts vindicated their original positions. Shock therapists, however, made one important concession: institutions and other initial conditions mattered more than they had previously acknowledged,” the researchers say.

Two years earlier, Nobel laureate Joseph Stiglitz had argued in his seminal paper “Whither Reform? Ten Years of the Transition” that prioritizing privatization over establishing a proper institutional framework promoted widespread corruption and asset-stripping, with these tendencies exacerbated by the liberalization of capital accounts, which facilitated transferring money abroad, King, Stuckler, and Hamm note.

The researchers say there is now consensus between gradualists and shock therapy advocates on another key point: some countries — like the Czech Republic — were more predisposed to restructure their economies more effectively and achieve competitiveness in globalized markets because of their particular historical and cultural legacies.

“Despite this concession, shock therapists continued to assert that faster and more extensive reforms lead to better performance. They therefore claimed their initial theories were not in need of fundamental revision. Instead, they argued that variation in performance could be explained by a combination of initial conditions and insufficient implementation of reforms,” the researchers say.

For example John Nellis, a senior manager in the World Bank's Private Sector Development Department, argued in 2008 that countries are “better off after the flawed privatizations they carried out than they would have been had they avoided or delayed divestiture.”

According to the Cambridge and Harvard researchers, however, countries that proceeded more gradually in creating a private sector, such as Poland and Slovenia, are now much closer to the “Western capitalist ideal,” enjoying a relative separation of politics and economics rather than “crony or political capitalism.”

“To be sure, we are not claiming that mass privatization is the only path to post-communist patrimonialism (Bulgaria, for instance, constitutes a clear case of patrimonial capitalism but did not implement a mass privatization program). Yet by contributing to a fiscal crisis and creating severe governance problems, mass privatization certainly provided a fertile ground for activities conducive to patrimonialism (e.g., funneling assets, official corruption, solicitation of kickbacks, and privatizing the means of administration).”

Milton Friedman
Vstoupit do diskuse (1)
Registrace: smskou dopisem
Akita Inu Let me get it straight So, only now these "researchers" come up with... 16:08 18.4.2012