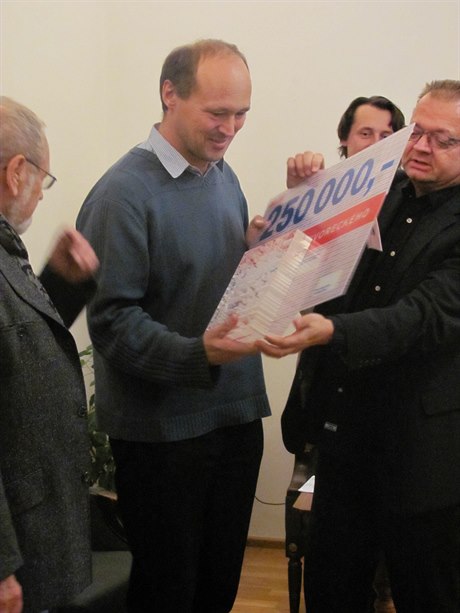 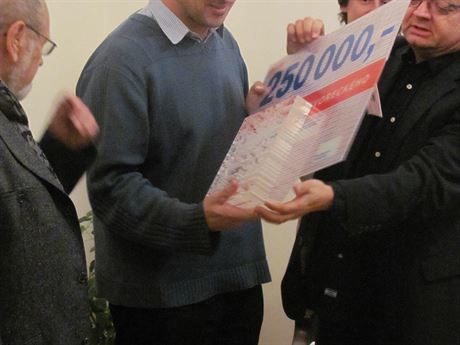 Czech novelist, screenwriter and documentary filmmaker Martin Ryšavý is the recipient of the 2011 Josef Škvorecký Prize for his novel “Vrač.” Cited for its formal features of a continuous monologue as well as its focus on Russia, Ryšavý’s victory did not come as a major surprise as his novel had a significant lead in the voting from the first round. Now in its fifth year, the prize comes with a glass trophy and Kč 250,000.

Ryšavý was chosen from a shortlist of five finalists that included “Ask Daddy” (Zeptej se táty) by the late Jan Balabán, whose 2004 book of short stories “Maybe We Are Leaving” (Možná že odcházíme) was recently selected as the Magnesia Litera award’s first Book of the Decade (Kniha desetiletí). The other finalists were Jaroslav Rudiš, Jaroslav Kovanda and Ivo Tretera. The finalists received awards of Kč 10,000.

When the 14-writer longlist was whittled down to five, some well-known names were left out, most notably bestselling author Michal Viewegh for the latest installment of his diary “Another Wonderful Year” (Další báječný rok). It was also noted at the time that the shortlist consisted entirely of male writers.

The Czech literary scene is small, so it is not unusual that not only does the Škvorecký Prize longlist contain virtually the same names (of writers, not books) from year to year, but that the jury choosing the prize will often have those same writers on it.

Among this year’s jury were the previous four winners: Emil Hakl (2010), Tomáš Zmeškal (2009), Petra Hůlová (2008) and Jan Novák (2007). With all these writers active themselves, it appears that some years there have been jury members with books in the running as well.

This is not the first award that “Vrač” has attained this year. The book won the 2011 Magnesia Litera award for the Best Prose work, while Balabán’s “Ask Daddy” was chosen as its Book of the Year. In 2009, Ryšavý also won Magnesia Litera’s Best Prose award for his two-part book “Journeys in Siberia” (Cesty na Sibiř). A short English excerpt from the book is available on the Czech Literature Portal.

Eyes on the east

Russia, in particular its Siberian Far East, has played a major role in much of Ryšavý’s work, both literary and in film. His 2010 documentary “Medvědí ostrovy” (Bear Island), which he wrote and directed, focuses on the inhabitants of a polar bear nature reserve on an island in the Eastern Siberian Sea.

In “Afoňka už nechce pást soby” (Afonka Doesn’t Want to Herd Reindeer Anymore), Ryšavý explored the generational conflicts among Siberia’s indigenous population, while in “Malupien” he documents the Siberian city of Yakutsk. What at first appears to be a bleak housing estate set down in the middle of the taiga is revealed to display some genuine creativity — not least the castle Malupien constructed out of scrap iron, planks and assorted junk.

Other Ryšavý documentaries have looked at Vietnamese families in the Czech Republic in “Banánové děti” (Banana Kids) and “Země snů” (Country of Dreams), the latter of which won the Pavel Koutecký Prize for documentary films in 2010.

Somewhere over the rainbow

The Josef Škvorecký Society was founded in 1989. Besides conferring the Škvorecký award for the past five years it has also issued 35 publications and other media on the writer’s life, as well as that of his wife and collaborator Zdena. It has also participated in conferences and exhibitions on Škvorecký’s Toronto-based publishing venture 68 Publishers.

It was after the Soviet invasion of 1968 that Škvorecký and his wife fled Czechoslovakia, making their home in Canada. From there they went on to publish the work of Czech and Slovak writers that would never have made it into print back home — writers such as Milan Kundera, Václav Havel, Bohumil Hrabal, and Ludvík Vaculík. Although Kundera’s most famous novel “The Unbearable Lightness of Being” was first published in French, it was 68 Publishers that brought out the first Czech edition in 1985.

For Škvorecký, the choice of Canada seems to have had a lot to do with linguistic and cultural affinities. In an interview in the Paris Review, he talks about being introduced to American culture through the movies of Judy Garland. In fact, it was his determination to write Garland a letter that spurred him on to learn English, which he did. Not surprisingly, he never heard back from her.