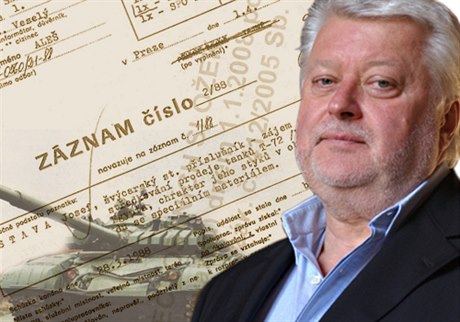 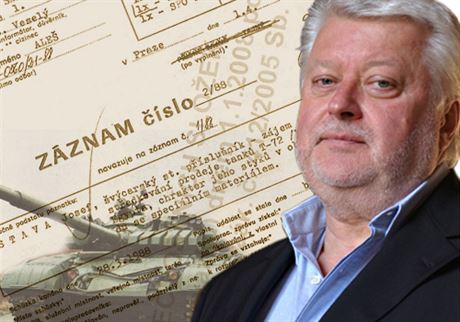 The revelations about Šťáva’s attempts to broker arms deals come from an StB file on Omnipol that was recently made available to Tomek. “It’s an object file [as opposed to a personal file – ed] about Omnipol’s foreign trade. Josef Šťáva’s name is mentioned several times in it,” he told MfD.

According to the StB file, in July 1988, for example, Šťáva visited Omnipol’s headquarters in Prague where he discussed the possible export of dozens of tanks to Iraq, he complained that the Israelis had attempted to murder his associate due to his armaments deals with Egypt, and revealed that one of his employees had been arrested in the US for exporting materials that were under an embargo.

The file was compiled from reports by StB informants and official records by Omnipol employees about negotiations with foreign nationals. MfD has published photocopies of pages from the file. In 1979, Šťáva received retroactive permission to leave Czechoslovakia, which legalized his emigration and enabled him to travel to communist Czechoslovakia on business.

According to the StB files, Šťáva first met with Omnipol representatives in February 1986. “Josef Šťáva, Switzerland — interest in delivery of munitions for Argentina,” reads one of the documents; it also reveals that an Omnipol representative was in negotiations to sell Czechoslovak munitions for rocket-propelled grenade launchers there. The potential deal fell through, and according to the StB file, Šťáva said this was due to personnel changes to the top brass of the Argentine military.

Then Šťáva came forward with a proposal that Czechoslovakia build an explosives factory in Libya to be financed by a French company, the file says. In the 1980s, Czechoslovakia exported large quantities of the plastic explosive Semtex to Libya, ostensibly for mining purposes, though some of it found its way to the Irish Republican Army (IRA), and was used in the Lockerbie bombing perpetrated by Libyan nationals.

On his next visit to Omnipol, Šťáva brought his partner Herman Schmidt, who presented Egypt’s interest in acquiring 60 mm, 81 mm and 120 mm artillery guns. Although Egypt was to purchase the weapons, they were to be delivered to Iraq which was still entangled in the eight-year war with Iran. Omnipol proposed just a trial delivery to begin with; Šťáva responded by taking Omnipol an offer secured by Schmidt from an Iranian firm seeking to acquire munitions and anti-aircraft weaponry and munitions.

Approximately a year later, the StB recommended opening a special file for Šťáva under the codename Stein. “He has established widespread connections with arms traders in Europe, Asia and Arabic countries, to people close to governments and military circles,” the proposal in the Omnipol file reads.

As of 1987, Šťáva is referred to as the director of the firm Diag Homan AG [the actual name of his former company is Diag Human]. In that year, for example, he informed Omnipol of Egypt’s interest in acquiring 200 armored personnel carriers (APCs), which were to be delivered via India to conceal the final destination. Šťáva promised Omnipol that he was able to secure an The files clearly show Šťáva’s ambitions to establish himself as an arms dealer, contrary to his previous assertions. official request by the Indian government for the equipment.

Also that year, he reportedly offered to broker a deal for the delivery of dozens of T-72 tanks that were to be delivered to Egypt by the Hungarian foreign trade enterprise and then transferred to Iraq. “Šťáva stated that at present he would have finances for 10 pieces, 16 in the next quarter, and the rest during the remainder of this year,” the StB file said.

The files available don’t say whether any of the prospective deals were concluded. Nevertheless, at the very least the file clearly indicates Šťáva’s ambitions at the time to establish himself as an arms dealer — and this clearly contradicts his previous assertions. Šťáva has claimed that the arm delaer alleagations were part of a smear campaign to damage his reputation.

“I’ve heard things about myself which sound like from a Bond film. I smuggled plasma as frozen fruit juice, I exported drugs and weapons, I took blood from prisoners in the German Democratic Republic, I sold infected blood — only nobody has presented any evidence of this nonsense,” Šťáva said in questions and answers written and answered by himself that he sent to media outlets shortly after news emerged that he had sold Diag Human.

Šťáva has not responded to requests from the media to comment on the contents of the Omnipol file.