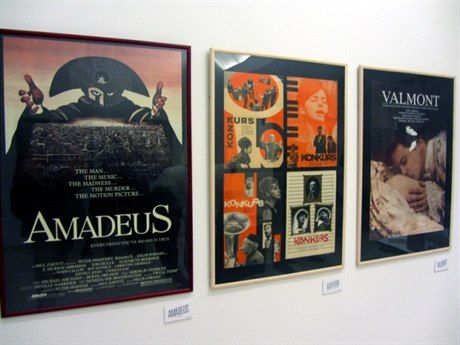 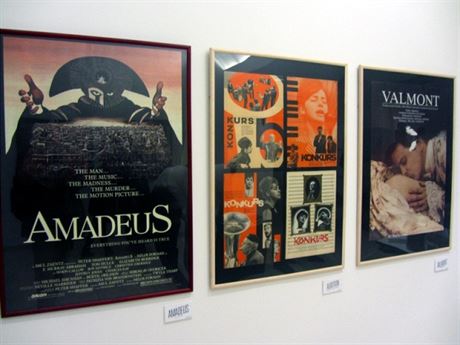 To celebrate the birthday of noted Czech film director Miloš Forman, who turns 80 on Feb. 18, the Czech Center in New York is displaying posters for his films. These help to draw attention to a lost era of Czech art: Film posters were one area where talented graphic artists could apply their skills in the communist era.

Rather than the bland corporate-dictated montages of movie star faces that are so ubiquitous today, the golden era of the 1960s posters — from the start of the Czech New Wave up to Normalization — saw experimentation with collage, painting, handmade fonts and other techniques.

“Many leading artists of that time started to make posters because they couldn’t exhibit or sell their own works,” said Pavel Rajčan, who curated the exhibit. Up until 1989, all Czechoslovak film posters were commissioned by the state-run film distribution monopoly, Ústřední půjčovna filmů (ÚPF).

Even today, few people see film posters as serious art. Rajčan, who also runs Terry’s Posters, the small store inside Prague’s Kino Světozor cinema, is hoping to change that. His efforts to interest Czech state art institutions in the value of these overlooked masterpieces has borne no fruit, though, leaving his store — which supplied the exhibition’s posters — as the main international promoter of these works.  (Terry’s Posters is also known as Terryho ponožky, or Terry’s Socks, due to a pair that filmmaker Terry Gilliam gave the store for advertising purposes.)

“Our cooperation with Czech Centers began few years ago. The cooperation was obvious and interesting for both sides because Czech Centers’ task is to present unique Czech culture in foreign countries, and artistic Czechoslovak movie posters belong to this category,” Rajčan said.

“We have already made exhibitions of various movie posters in Vienna and Tokyo. This exhibition of posters for Miloš Forman’s movies in New York is just the first of series of exhibitions that will follow in many Czech Centers around world. The final itinerary is still in progress,” he added.

Some artists appreciate the effort. Petr Sís, who designed a poster for “Amadeus,” thanked Rajčan and Terry’s Posters at the exhibition opening. “I am glad someone is keeping them from being forgotten,” he said. Aside from the internationally used poster for “Amadeus,” he made about 20 other Czechoslovak posters in the communist era for works by other directors. He doesn’t want all of them to be remembered, he said jokingly, citing designs he made for the Czech release of two Soviet films.

Sís also expressed his gratitude to Forman — who did not attend the small opening — for giving him a big chance with “Amadeus,” which had a highly unusual poster for a Hollywood film in 1984, when bland formulaic ad campaigns had already taken over.

A trend across Central Europe

A few posters stand out from the rest, artistically. “Vladimír Bidlo’s [Czech] poster for ‘The Firemen’s Ball’ is a crazy collage poster but in perfect agreement with idea of movie,” Rajčan said. “As for well-known artists, I can name the poster for ‘Audition’ by Jiří Šlitr, a very famous theater and music performer who had very big influence on the [Czech] cultural scene during ’60s and ’70s,” he said.

Czechoslovakia wasn’t the only Eastern bloc country to elevate posters to a high art. “Poland is where artistic movie poster was born. … When Czech artists met their Polish colleagues at Expo ’58 , they took it as an inspiration to create their own style, which has some similarities with the Polish style but yet is completely different,” Rajčan said.

A Polish poster for “Amadeus” by Jakub Errol is one of the highlights of the exhibition. The stark black-and-white poster shows a long-haired man with devil’s horns. He is disintegrating, as if he were made of stone. A poster from Hungary for “Fireman’s Ball” (Hoří, má panenko) and some posters from East Germany show those countries’ approaches to Forman’s films. “Fireman’s Ball” has the most examples in the exhibit, and the styles are quite diverse.

The artistic approach was sometimes driven by pragmatic reasons. In many cases the graphic designers had not seen the films they were making illustrations for and had only a hazy idea of the content. Creativity filled in the gaps.

Lost art in more ways than one

As with many art forms, posters became less creative during the Normalization that followed the 1968 Soviet-led invasion. But capitalism completed what Normalization started. After 1989, virtually all creativity in Czech movie posters was lost. “Rapidly, the distribution monopoly (ÚPF) fell with regime, and many new smaller distribution company arose. But big Western movie studios have a different policy for the distribution materials for their movies, so artistic movie posters suddenly disappeared,” Rajčan said.

“Now all Czech distribution companies use materials provided by the movie studios, which is usually written in the distribution contract, so there is no space left for original movie posters — which in a country with such a big tradition is quite a shame,” he said. Posters for new Czech films have started to follow the Western model, with movie star images and standardized typefaces.

The contrast between modern Hollywood and the Czechoslovak golden age can be seen in the exhibit as well. The least interesting poster is the American one for “The People vs. Larry Flynt,” the director’s 1996 movie on censorship. It is a star’s face — Woody Harrelson— with a flag pasted over his mouth. It is the only one in the exhibit attributed to that most bland but prolific of authors: Anonymous.

Due to ignorance, pre-1989 Czechoslovak posters have become quite rare. ÚPF disposed of thousands of posters right after the Berlin Wall fell, seeing no value in communist-era memorabilia. “Almost all of the Czech posters from the 1960s are lost or destroyed,” Rajčan said. This makes classic Czechoslovak film posters among the most highly sought by collectors.

The exhibit runs through Feb. 29 and includes free screenings of three of Forman’s films plus a documentary about him.