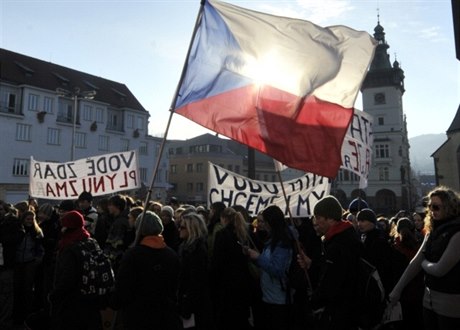 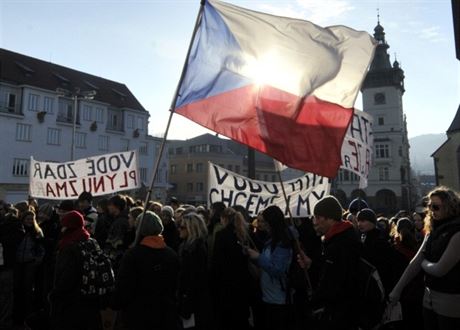 Hundreds gathered on the main square of the northwest Bohemian town of Náchod on Tuesday morning to protest the planned exploration (and eventual extraction) of shale gas deposits in the region. Although the Ministry of Environment has already issued a survey license to an Australian-owned company, a host of local municipalities have appealed the decision.

Basgas Energia Czech plans to survey 777 square kilometers in the Náchod, Trutnov and Broumov districts for deposits of shale gas, also known as “unconventional gas.” Jiří Malík, an ecologist and representative of the anti-shale gas pressure group STOP HF, told the ČTK news agency the protestors had learnt that the company’s owners would be present for a seminar hosted by the Hradec Králové regional governor Lubomír Franc (Social Democrats, ČSSD) — and wanted to send a clear message.

Basgas Energia Czech is a subsidiary of Hutton Energy, which Czech media widely reported on Tuesday is a US company. However, the firm, which was founded in Australia as Basgas Pty Ltd and changed its name to Hutton Energy in 2011 upon relocating to the UK last year, is now 75 percent controlled by the Macquarie Group of Australia.

Hutton Energy says its subsidiary “will be one of the first independent oil and gas companies to focus activities solely on unconventional gas resources” in the Czech Republic. The company says its  777 km² concession has been identified as a “Silurian shale gas play with similar characteristics to other plays in both Poland and North America.” Based on initial exploration in Poland, the fact the site has “high organic content and silica content means it has high potential for shale gas production.”

Opponents to shale gas extraction in the region claim the unconventional gas damages the environment and poses a real threat of contamination to underground water tables – and thus water supplies for local residents. “Any legalization of hydraulic fracturing [fracking] in the Czech Republic will lead to the legalization of contamination of groundwater,” STOP HF’s Malík was quoted by ČTK as saying.

Pavel Lhotský from Basgas Energia Czech tried to reassure the meeting that exploration and extraction would not pose any threat to local water supplies. “Each bore hole will be isolated several times over with concrete and steel shielding,” he said during the debate hosted by the regional governor, which was broadcast over the Internet.

Lhotský also claimed that in the US, where shale gas has been extracted for over 10 years, there has not been a single case of contamination of groundwater from the process. However, in April 2011 the US National Academy of Sciences published a study showing that water supplies in upstate New York and Pennsylvania have been contaminated with methane as a result of shale gas extraction.

For the most part, the anticipated reserves of shale gas lie around 1.5 km under the ground, whereas the groundwater tables are at a maximum depth of 500 meters. According to the ecologist Malík, “it is absolutely certain and indisputable” that some natural impurities, such as chemicals used to in the extraction process, and the gas itself, will seep into the groundwater.

Hutton Energy executive director David Messina and company communications manager Anna Maio attended Tuesday’s seminar. Speaking to Czech Position on Tuesday afternoon, Maio said the meeting in Náchod “had definitely been a challenging situation ... but we were glad to open dialogue with the local community.”

Maio declined to comment as to why the company had not attempted to initiate that dialogue prior to, or at least upon, submitting its application for an exploration license to the environment ministry, instead of waiting for Hradec Králové regional governor Franc to take the initiative.

The Náchod district assembly passed a motion on February 20 opposing local shale gas exploration. Some 50 local administrations in the region have signed a petition against surveying for shale gas, and submitted a formal objection to the Ministry of Environment against the permit issued to Basgas Energia Czech. The objection should be reviewed at the end of March or early April.

The permit for exploration reportedly includes a site nearby the town of Náchod, which is a key source of local drinking water. ‘We must not let anyone even drill here. What’s important for us here isn’t gas but water.’

“We must not let anyone even drill here. What’s important for us here isn’t gas but water,” assembly member Fiedler Libor (nonaffiliated) told the assembly at the Feb. 20 meeting. “Náchod is around 80 percent connected to the Polická křídová basin, and there is a great danger there of contamination of the groundwater,” Náchod Mayor Jan Birke (Social Democrats, ČSSD) said at the same meeting.

Franc is also opposed to Hutton Energy’s plans. Drilling towers “don’t belong in the shadow of the Krkonoš Mountains or above the Babiččiný Valley,” he said, as cited by Czech Television (ČT) on Tuesday.

Apart from its plans in the Náchod, Trutnov and Broumov districts, Basgas Energia Czech also wants to survey a 946 km² block in the Beroun district some 30 km southwest of Prague. On Tuesday, an Environment Ministry spokesman was unable to comment on the stage of its application for permission to survey the district. There is no information on the ministry’s public domain about the shale exploration license granted to Basgas.

Pioneered in the US, in Europe shale gas exploration and initial extraction is most advanced in Poland, where the government is particularly keen on lowering dependence on Russian gas imports. Poland’s environment ministry has issued over 100 licenses for shale gas exploration in the country, including to global energy majors Exxon Mobil and Chevron. In 2014, Poland expects to extract between 200 and 300 million cubic meters of shale gas.

“The seven people include three Environment Ministry officials, one from the Polish Geological Institute and three businessmen representing companies holding licenses for shale gas exploration,” Poland’s internal security agency (ABW) said. According to Polskie Radio, the seven were detained under Article 228 of the country’s penal code “in relation to the conduct of public officials,” which covers bribery and corruption involving state officials and civil servants.