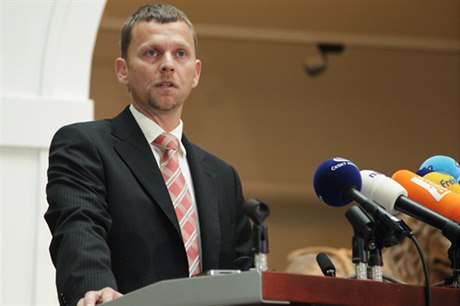 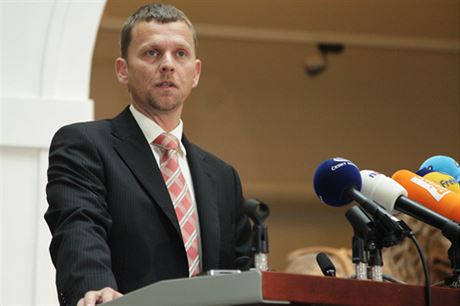 The official appointment of Martin Kuba as Czech Minister of Industry and Trade on Wednesday morning has been overshadowed by the decision of his party colleague Michal Doktor to quit the center-right Civic Democrats (ODS). Doktor, who joined the ODS in 1991 and was billed as candidate for the ministerial post, said he is “not willing or able” to accept Kuba’s appointment.

Speaking on Wednesday at the Ministry of Industry and Trade after officially presenting Martin Kuba as the new minister, Prime Minister Petr Nečas (ODS) said Doktor’s announcement earlier in the morning had come as a complete surprise to him. “He didn’t inform me about anything of the sort. We spoke only briefly yesterday, and we agreed to meet again. He took this step without telling me and without us meeting beforehand,” he said.

In the afternoon Doktor called a press conference in the lower house of the Czech parliament (the Chamber of Deputies) to explain his decision to quit the party: ‘If my [ODS] colleagues do not appreciate my abilities and energy, then I cannot waste my energy in this direction’

“Basically there are two reasons: I’m not satisfied and cannot swallow the prime minister’s choice of person named as the new minister ...  But more importantly, and the principal reason, is the repeated expressions of mistrust and expressions of doubts directed at me from the leadership of the ODS in the South Bohemia. If my [ODS] colleagues do not appreciate my abilities and energy, then I cannot waste my energy in this direction,” Doktor told the media. “I consider Petr Nečas’ choice to be bad, fatally bad.”

Responding to a journalist’s question, Doktor refuted the prime minister’s claim that his resignation had come as a surprise, saying he had informed Nečas of his decision approximately 24 hours prior to the press conference, by phone.

Doktor denies he has any plans to join another party or political movement and says that he will continue to support the ODS in parliament as a nonaffiliated candidate — as long as policies put forward are in line with the party’s principles and the three-party coalition’s (ODS, TOP 09 and Public Affairs) official policy program.

Doktor expanded upon his reasons in an interview with the server Tyden.cz: “With the appointment of Kuba, tens, or more like hundreds, of ODS members in the South Bohemia region will lose hope that some things in the ODS will change — that genuine qualitative assessment will begin, and that the behind-the-scenes games and agreements, which in my experience Martin Kuba clearly represents, will be put to an end.” ‘I cannot ignore the fact that Martin Kuba was the chief engineer of my being sidelined.’

“I cannot ignore the fact that Martin Kuba was the chief engineer of my being sidelined and the [political] execution of other names who symbolized the ODS in the South Bohemia region long before he joined the party,” he added.

Kuba is considered by observers to be backed by the controversial businessman Pavel Dlouhý, who former ODS prime minister Mirek Topolánek once called the “Godfather” (as in a mafia-type figure) of the South Bohemia region.

In 2009, the weekly Respekt published an in-depth report on Dlouhý according to which he sits on the boards of over a dozen mostly nontransparent companies.“Basically, Pavel Dlouhý’s life appears to be one big mystery. His acquaintances also do not know how exactly he makes his living, given that he’s always in the restaurant [in his hometown of Hluboká] or gone hunting or similar such leisure pursuits,” it wrote about Kuba’s presumed backer.

A number of observers say Nečas’ choice of Kuba was undoubtedly to strengthen his position as leader of the ODS, at the expense of the party’s image in the public eye.

Kuba claimed on Wednesday that he had spoken with Doktor on Monday and that together they had agreed that they would work together irrespective of who was appointed to the ministerial post and that if either of the two received the post it would be a “benefit” to the ODS in South Bohemia.‘He always defended our colors and was among the best speakers’

A number ODS MPs sounded genuinely surprised by Doktor’s resignation. “I’m very sorry; he always defended our colors and was among the best speakers,” Boris Šťastný told news server aktualne.cz. MEP and leader of the ODS in the Vysočina region, Ivo Strejček, told the server parlamentnilisty.cz, “Despite the fact that the pressure within the South Bohemia ODS to isolate Doktor has been known for years, I still consider his decision to be rash. His work ethic and outlook, equally the integrity of his opinions will be missed in the ODS.”

Kuba replaces Martin Kocourek, who resigned last week after failing to give an adequate explanation about how his mother received over Kč 16 million via the nontransparent brokerage Key Investments. Under Kocourek’s leadership the Industry and Trade Ministry (MPO) drafted a new energy strategy up to the year 2050 that calls for strong intensive development of the country’s nuclear sector. The ministry should also play a significant role in deciding which company will win the tender to build two new reactor blocks at the Temelín nuclear power plant in South Bohemia.

It remains to be seen whether or not Nečas’ choice of Kuba will strengthen his position in the party with reliable allies, or to the contrary, if he will be perceived both within the party and by the public as a weak leader who has succumbed to the pressure of an influential faction within the ODS.