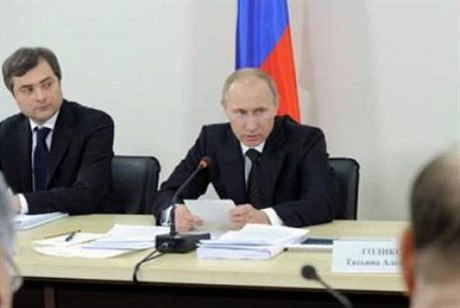 The Kremlin’s chief ideologist Vladislav Surkov (left) is said to have had authority even over presidents Vladimir Putin (center) and Dmitri Medvedev foto: © ČTK, Česká pozice 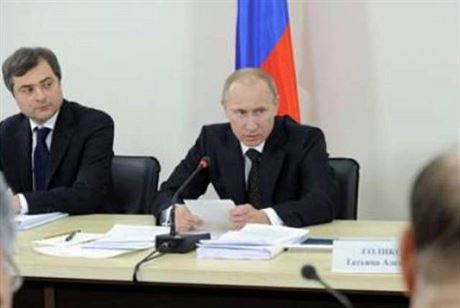 The Kremlin’s long-time chief ideologist, Vladislav Surkov, was named head of the Russian-Czech inter-governmental trade and industry commission weeks ago, but the appointment went unreported in the Czech press until Tuesday. However, it would be a mistake to underestimate the significance of the appointment. Despite his recent departure from the Kremlin, Surkov undoubtedly retains huge influence in the business and political spheres, and could be a powerful voice for the Russian-led bid to expand the Czech nuclear plant Temelín.

Surkov, labeled as a “gray cardinal” by the fractured Russian opposition, was a chief architect of the United Russia party, and the mind behind the pro-Kremlin youth movements like Nashi. President Dmitry Medvedev removed him from his post as first deputy head of the presidential administration in late December — in what was widely interpreted as a demotion and an attempt by the Kremlin to appease growing public discontent following disputed parliamentary elections results.

The Czech news server E15.cz reported on Surkov’s appointment on Tuesday, a full three weeks after it became official (on February 27). Surkov was also appointed to lead his country’s side of a Russian-Spanish inter-governmental trade and industry commission. The server noted that such inter-governmental commissions are important for the development of bilateral relations because in Russia “the state still plays a considerable role in the economy.”

Despite the Czech Republic’s membership in the European Union, Russia remains an important — and growing — trading partner; bilateral trade his a record high in 2011, and Czech companies in a range of sectors are looking to enter or expand on the Russian market as EU markets stagnate. “The fact that Vladislav Surkov now has direct responsibility for the [bilateral] commission could help cooperation between Russian and Czech firms,” Václav Petříček, chairman of the Czech Chamber for Cooperation with CIS states, told E15. “The commission has supported Czech-Russian cooperation in the fields of space research, innovation, microelectronics, medicine and agriculture.”

In the same way that US ambassador Norman Eisen says part of his mission in Prague is to promote the Japanese-owned US firm Westinghouse’s bid to build two new reactor blocks at the Temelín nuclear power plant in South Bohemia, the head of the Russian Trade Representation in the Czech Republic, Alexanderv Turov, says the representation is lobbying the Russian-led bid headed by the state nuclear agency Rosatom.

And with Surkov now at the helm of the Russian side of bilateral trade relations, they have an exceptionally powerful lobbyist who can open — and close — all sorts of doors and opportunities for Czech firms in Russia.

It was Surkov who is attributed with the concept of “sovereign democracy” — essentially the justification for limiting political and press freedoms for the sake of protecting Russian interests and maintaining social stability. He was also the brain behind the pro-Kremlin youth movement Nashi, which promotes patriotism and loyalty towards the country’s leadership and Vladimir Putin in particular. Critics claim this policy of promoting patriotism has nurtured xenophobia and led to the spread of ultra-nationalist ideology among Russia’s youth.

Their claims appeared to many to be grounded when in December 2010 a wave of racial violence swept Moscow following the shooting of a Spartak Moscow fan and some 5,000 football fans and ultra-nationalist youths clashed with riot police right by the walls of the Kremlin.

Given the complex, sometimes explosive, ethnic diversity of the Russian Federation, the riot clearly shook the Russian leadership and prompted some usually pro-Kremlin media to conclude that its policy of promoting patriotism among the youth had backfired. There was a certain twist of irony in the accusations leveled against Surkov, given that he is half Chechen and people of North Caucasian ethnicity are typically the prime targets of Russian ultra-nationalist groups.

Few are more qualified than Gleb Pavlovsky — a self-described political technologist who worked on Putin’s first two presidential campaigns, then Medvedev’s, and also advised Surkov — to comment on the scope of Surkov’s power. “Up until now, practically all the fundamental institutions, the parties, the governors [of Russia’s regions], the president and parliament were under his authority,” Pavlovsky said, as quoted by the server polit.ru, which he founded, following Surkov’s ejection from the Kremlin last December.

The removal of Surkov from the presidential administration and his appointment as deputy PM for modernization was interpreted by almost all commentators as a demotion. In an editorial piece published in early February dedicated to the Russian leadership’s ongoing drive to modernize the country’s economy, the news server gazeta.ru said the reshuffle at the end of December was either due to strategic personnel reasons or “populism bordering on the naive.”

“Indeed, the removal of Valdislav Surkov form the presidential administration and his appointment to the government — from party work for which he earned the reputation as a puppet master, to innovation — looks like he has been exiled and cannot be explained by his sphere of competences. On the other hand, he is excellently adept in the area of personnel games,” the server commented.

Surkov claims he himself requested a change of post. “Quite a long time ago already I asked the leadership to give me the possibility as of the new year to start a new life. The request was understood, for which I’m grateful,” he told the Interfax news agency.

The daily Moskovsky Komsomolets (MK) cited anonymous sources in the Kremlin as saying Surkov indeed desired a change and wanted to get involved in the ambitious government-led innovation project, dubbed the Russian Silicon Valley, in Skolkovo near Moscow. “MK’s sources say that Vladislav Yurevich [Surkov] has long since tired of being the curator of internal politics and instead has taken great interest in the plan to build Skolkovo, and wanted his future work to involve this area specifically. Therefore, deputy prime minister for modernization is precisely the right job,” the daily wrote.

In his new post new post Surkov has indeed been appointed the new government “supervisor” for the Skolkovo project. The label of “Russia’s Silicon Valley” does not fully portray the scope of the undertaking. “Skolkovo is more than a science or technology park: it is a full-fledged city, though it is a special city in which creativity is the rule rather than an exception; a prototype for the city of the future,” the official website for the project proclaims. In addition to IT, the areas, or clusters, in which research and development are being planned and launched also include biological medicine, energy, space, and nuclear technologies.

The project was officially launched in 2009. The Russian government has allocated 22 billion rubles for the project in 2012, and pledged 17.3 billion for 2013. Western corporations which have signed up as partners include SAP, IBM, Intel, Siemens, GE, Nokia, EADS, and Ericsson.