Church, then state: upon returning from Rome, Cardinal Duka prayed to Saint Adalbert of Prague before paying a visit to President Klaus 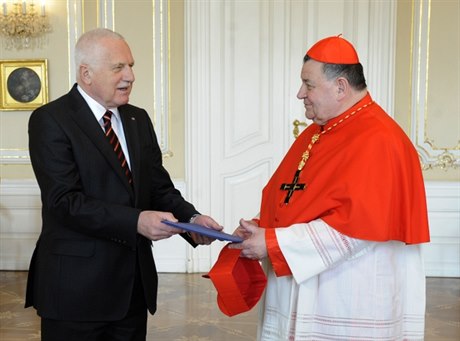 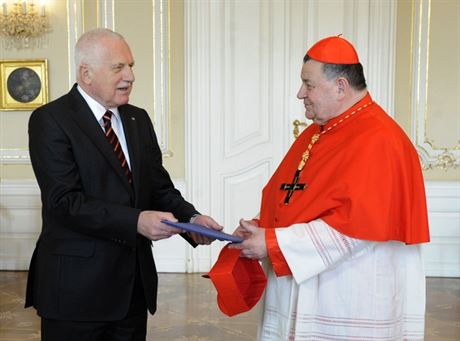 Elevated to Cardinal by Pope Benedict XVI in the Vatican last Saturday, Catholic priest Dominik Duka’s first secular meeting upon returning to the Czech Republic on Tuesday was with President Václav Klaus. To mark the occassion, he published a letter on his personal website congratulating Cardinal Duka — who faces criticism from some Czech Catholics for being too close to Klaus and reportedly supporting his political agenda.

On Tuesday morning, all members of the Metropolitan Chapter of Saint Vitas of Prague greeted Duka on the steps of Prague’s St. Vitas Cathedral, where Duka then prayed to Saint Adalbert of Prague and led prayers. Duka then took a short walk across the third courtyard of the Prague Castle to pay a visit to the president.

Published on Tuesday, Klaus’ open letter will do nothing to placate the new Czech Cardinal’s critics who suspect he has a political alliance with the Czech president and certain ultra conservative figures in his entourage. In his letter, Klaus essentially justifies and praises Duka’s readiness to speak out on social issues with political aspects and implications:

“Awareness of continuity and historical responsibility belong to public service and should also be a part of the common understanding and outlook of society. I know that you are well aware of this.”

Elsewhere in the letter, Klaus comments on the significance of Pope Benedict’s decision to appoint another Czech as cardinal. “I also view his decision as confirmation of the significance of the contribution of Czech Catholics towards the Church’s endeavor to protect basic Christian values in today’s world,” Klaus writes.

Duka is now the second living Czech Cardinal after Miroslav Vlk, who will lose his power to participate in the election of the future Pope when he turns 80 in May.