Gentlemen prefer blondes; the Czech President has a thing for airline stewardesses. Is it all a cover story? Or just a sordid ‘tabloid game’? 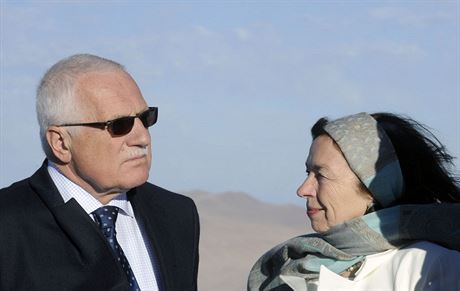 Klaus has confessed that his relationship with an air hostess would be difficult to explain to his wife, Livia. There are persistent rumors that his love for blondes is a cover for the love that dare not speak its name | foto: Klaus.cz, Česká pozice

“Klaus again CAUGHT with mistress Petra” screamed the headline. Noting that Czech president Václav Klaus, 70, has had an exhausting summer — what with a two-week speaking tour of Australia in his role as climate change denier, the furor leading up to Prague’s first gay and lesbian festival and his Achilles’ heel acting up — the tabloid Aha! carried a report on Thursday that Klaus has again been cavorting with a blonde air hostess with whom he allegedly had an affair after taking office.

“On Tuesday evening, therefore, he decided to relax by playing his favorite sport, tennis. Accompanying him was the blonde airline stewardess Petra Bednářová. Yes, the young beauty with whom he had ‘an affair’ after taking the presidential oath. Even back then, he was caught by the Aha! daily,” reads the lead paragraph in the two-page spread, complete with a series of photos of Bednářová with Klaus and a small entourage.

The timing for the article could not have been better — in terms of bolstering the Czech president’s manly image — as it comes on the heels of an interview with Jakub Starý, the editor in chief of the gay magazine LUI, in which Starý said Klaus was a closeted homosexual.

“[The] entire gay community thinks that Václav Klaus is gay. He’s just trying to hide it and mask it. Do you not see it? The way he carries himself and speaks or his gestures and tone of voice. That’s homosexual behavior,” said Starý, who admitted that he had no proof but said his “gaydar” tells him Klaus is not a straight shooter.

Starý gave the interview following “deeply offensive” remarks by Klaus and his deputy chancellor Petr Hájek ahead of last week’s Prague Pride 2011 festival, in which the Czech president said it was one thing to “tolerate” homosexuality and quite another to promote “homosexualism” and defended Hájek’s use of the word “deviants” to describe gays and lesbians.

They say gentlemen prefer blondes — and a recent survey has shown a popular sexual fantasy among Czech males is about getting it on with a busty air hostess — so Klaus’ alleged extramarital affairs with blonde airline stewardess over the years would likely even be appreciated (at least vicariously) by red-blooded Czech male voters.

The Aha! report went on to name two other air hostesses who allegedly had romantic couplings with the Czech president — Eva Svobodová, whom he linked to back in 1991 when Finance Minister of post-Communist Czechoslovakia, and Klára Lohniská, who in 2002 was working on his official aircraft when Klaus was the Czech prime minister.

The morning after winning re-election as president in March 2008, Klaus was photographed with Bednářová, also a stewardess on the government aircraft, outside a hotel in Prague. He admitted in an interview to having a “special relationship” with Bednářová in April 2008 and confessed that it would be difficult to explain to his wife, Livia, whom he married in 1968. ‘And what about 67-year-old First Lady Livia Klausová? She has always suffered her husband’s infidelities silently.’

“And what about 67-year-old First Lady Livia Klausová?” Aha! wrote on Thursday. “She has always suffered her husband’s infidelities silently.” Not entirely. In the 2009 book “I Don’t Bother Myself with Being Sad” (Smutkem se neobtěžuju), in which she is interviewed about their life together, when asked about her husband’s alleged repeated infidelity Klausová said she’d never thought of getting divorced (“which solves nothing”) but that infidelity is certainly hurtful.

The largest circulation daily, Mladá fronta Dnes, summed up the Czech nation’s indifference to their politicians’ private sex lives. “The American saying ‘He cheated on his wife; He will cheat on his voters’ does not apply here. A mistress is generally considered a sign of a real man,” the paper said. The daily Lidové noviny noted “Czechs just shrugged their liberal shoulders” in reaction to the revelation.

In his book “Czechs in a nutshell,” Norwegian journalist Terje B. Englund also touched upon the nation’s famously liberal attitude towards marital infidelity, citing a TNS Factum survey from 2003 that showed that while Czechs consider “life in a happy family” to be of the utmost importance they tolerate – and conduct – marital infidelity to an extent that is matched globally only by the Bulgarians and Russians.

Czechs are less tolerant when it comes to homosexuality although still quite liberal. For example, a majority of respondents to a poll on annual survey on the issue by Public Opinion Research Center (CVVM) published in May found that 72 percent of respondents think that gays and lesbians should be allowed to enter into registered partnerships — legislation that passed in the Czech Republic despite Klaus having vetoed it.

There are persistent rumors that Klaus is himself a closeted homosexual. Several years ago, the popular Czech actress Eva Holubová said in an interview with the television station Z1 that the “whole of Prague” thinks the president is gay and that he is known in the community by the nickname “Kikina.” But although the Czech tabloids freely publish all kinds of such unsubstantiated rumors about celebrities, the subject of Klaus’ alleged homosexuality is “taboo” for the media, she said. It has long been said that ‘Klaus’ affairs with the stewardesses were manufactured to counter public suspicions.’

Commenting on the Aha! article, media analyst Karel Hvížďala noted that it has long been said that “Klaus’ affairs with the stewardesses were manufactured to counter public suspicions” of the Czech president’s homosexuality. “But this is all speculation and a tabloid game. This is not a topic for serious analysis. Every article, also abroad, where the president is with a pretty girl always appeals to people,” Hvížďala told the news server ParlamentníListy.cz.