A baby who drinks from bottles containing Bisphenol A risks diabetes and cancer. The EU is acting; why haven’t the Czechs? 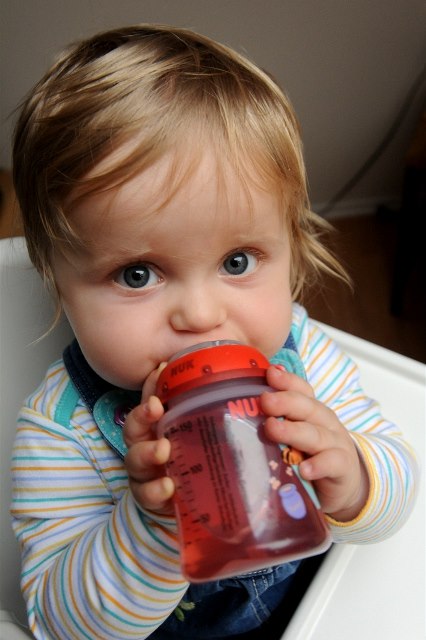 A baby-feeding bottle made with Bisphenol A can give rise to a lifelong health risk foto: (c)Ilustra, Česká pozice

The Czech Health Ministry evidently does not place much importance on the serious threat posed to the health of babies by Bisphenol A (BPA), an organic compound found in polycarbonate plastic baby bottles. Otherwise it would not have neglected to prepare a decree incorporating an EU directive banning the production and sale of these bottles into Czech law.

The EU production ban takes effect on March 1; in Czech ministries, a draft bill is only now being circulated among departments for comments on a legal regulation that should have been adopted by Feb. 15. Theoretically, Czech manufacturers could keep producing large quantities of bottles with BPA if it were not for another date hanging in the air – from June 1 the dangerous bottles will have to be removed from the shelves.

The Health Ministry’s self-preservation instinct means that it will probably comply with this deadline. The legislative mess, however, may entice unsuspecting vendors into a trap, allowing them to stock up on goods before the summer that will then immediately have to be consigned to the scrapheap.

Don’t expect any help for infants

Czech mothers are also among those unaware that the bottles they are using for their babies are unsafe. But how can you find out which bottles are a threat and which are completely harmless? The Health Ministry’s delay in announcing binding rules and a concomitant awareness campaign on the subject is potentially doing major damage to our smallest citizens.

A year ago, Denmark resolved this a lot more efficiently than the rest of Europe – they banned the use of all risky plastics intended for children below three years of age. They also banned all the problematic plastic packaging that comes into contact with food for small children. The Czech chapter of Greenpeace suggested this solution to the Health Ministry, but it didn’t listen: Only the bottles will be banned in the Czech Republic. Parents can rest easy if they find the letters ‘pp’ on the bottom of a plastic bottle. But the labelling is not mandatory.

Parents should not wait. All polycarbonate plastic utensils should be disposed regardless of when the ban takes effect. Bisphenol A is equally dangerous if it is secreted from a bottle or a plastic cup, particularly if we pour hot milk or tea into it.

How to eliminate the risk

Traditional glass bottles for children also pose no problem in terms of chemical secretions. Parents can also be reassured if they find the letters “pp” on the bottom of a plastic bottle, as such bottles are made from polypropylene, which is harmless. The polycarbonate with the dreaded Bisphenol A either has a “7” in a triangle or the letters “pc.” It is advisable to dispense with these kinds of bottles. Unfortunately, the labeling of chemical substances is not mandatory.

Nonetheless, just banning bottles represents a victory in the Czech milieu, something which would never have been achieved without the EU directive. In June 2010 — when Greenpeace’s Jan Freidinger called on the Chief Public Health Officer Michael Vít to follow the Danish example and ban BPA for infants — he found no sympathy for taking precautionary action. Vít did not have a problem with Bisphenol A because the legally prescribed daily dose was not being exceeded.

Where has the sperm disappeared?

So why has there been this song and dance? Because the fate of many sensitive life functions is decided when people are infants. Brno’s organic chemistry guru, Professor Ivan Holoubek of Masaryk University, has noted that BPA is detrimental to the functions of male and female hormones that influence reproduction.

Infants have a high sensitivity to what they ingest, especially if their baby bottle is their only feeding aid. At the same time, such small children are not able to break down BPA as quickly as adults. Doctor Miroslav Šuta, who is an expert health-risk consultant, says that major exposure to such substances poses a significant risk for a child’s future development. With males it can have a very adverse effect on the quantity and quality of their sperm, and it can reduce female fertility.

The list of risks doesn’t end there. University of South Bohemia toxicology professor Jiří Patočka admits that the widespread use of Bisphenol A is probably linked to the emergence of reduced responsiveness to insulin. In later life, this can prompt the onset of type II diabetes, and lead to breast cancer in women and prostate cancer in men. Patočka says Bisphenol A is responsible for the current upsurge in cases of diabetes and obesity. It could also be a contributory factor in gestational diabetes, hardly a generous present to give someone while still in the cradle.

The influence of BPA is not just confined to children. Alarmingly, scientists maintain that traces of this substance can be found in the urine of 93 percent of Americans. The most cited British study to date collated the results of 1,455 adults and drew attention to the possible influence of Bisphenol A on heart disease and the occurrence of diabetes.

The American government funded research in four Chinese factories where workers were exposed to high levels of Bisphenol A. Its influence on male hormones turned out to be huge. In comparison with a normal working environment, four times more workers had problems with erectile dysfunction and there was a sevenfold increase in difficulties with ejaculation.

Patočka has pointed to the close relationship between studies monitoring the concentration of Bisphenol A in urine and research monitoring its presence in food. The conclusion is clear: we ingest most Bisphenol A through food.  The latest experimental and epidemiological studies have revealed something even more serious – the harmful effects of Bisphenol A also occur at low doses.

In the scientific community, these newest results are still the subject of dispute. The harmful nature of Bisphenol A is simply not as clear-cut as the harmfulness of smoking, which we can read about on every cigarette packet. Nevertheless, there is an ever-growing number of warning voices, and there is nothing wrong in applying the principle of precautionary care to exclude the possibility of any threat to babies.

At present, civilization can’t do without Bisphenol A. It is a component of polycarbonate plastics (70 percent) and epoxy resins. We can find it in the fillings in our mouths as well as in CDs and DVDs, microwaves and other kitchen appliances. It is present throughout dwellings in water piping and flooring, used in the production of brake fluid, electric insulation and flame retardants.

Despite the broad scope of uses for Bisphenol A, the chemical industry is also striving to continue production for infants’ products. Jasmin Bird from the Association of Plastics Manufacturers in Europe claims that the relevant studies confirm that this substance is harmless. She also refers to a study by the European Food Safety Authority (EFSA).

Zdeněk Rytíř, a representative of the Czech chemical manufacturer Spolchemie, also denies that Bisphenol A is harmful to the hormonal system. “From a toxicological point of view it is one of the most studied substances,” he says. “It has been used for 50 years without any problems or negative effects. And it is well below the tolerated daily intake set by the EFSA. This substance is not a risk to human health.”

One might expect the producers of Bisphenol A to have powerful intercessors with the EFSA; however, from the quotes that the European Commission adopted for its implementation report, its food safety organization takes a completely different view.

In the implementation report for the European directive, the EFSA firmly argues that polycarbonate bottles are the main source of contamination for infants and that it is necessary to replace them.

It also draws attention to the fact that a child’s internal system, which should eliminate BPA, is still not mature and that it will not develop for another six months, even admitting that infants are very heavily exposed to the effects of the monitored substances, even when the daily limits set by the EFSA itself have not been exceeded.

The EFSA goes even further in arguing for banning the bottles. The toxicological effects may have a much stronger impact on a baby’s underdeveloped organism. This can cause biochemical changes in the brain, which could influence the development of the nervous system and a person’s immunity. The early exposure of a small child’s organism to Bisphenol A may result in detrimental reactions at a later age. If this adult encounters the effect of a carcinogen, he or she could be a lot more vulnerable to the formation of tumors.

The implementation report for the European directive urgently warns that infants are a particularly vulnerable segment of the population. Many findings significant for human health cannot yet be fully assessed, but even this incomplete appraisal should be enough to get parents to dispense with dangerous baby utensils without waiting for the European and Czech authorities to act.