Karlovy Vary: All the Czech fat cats at one trough

The future president, Temelín’s expansion and huge state property transfers — all on the table at the Czech Repubilc’s top film festival 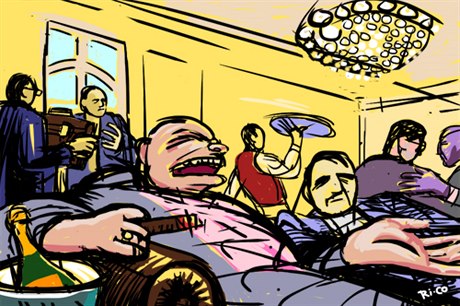 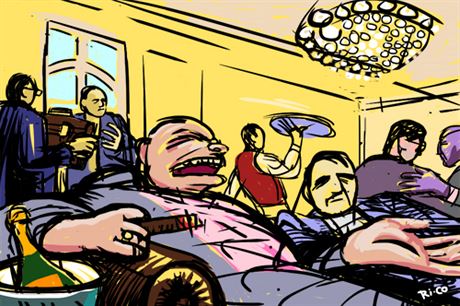 It has become a tradition that during the Karlovy Vary International Film Festival (KVIFF) big deals are sealed and the groundwork for political decisions is laid. In the Grandhotel Pupp café, Becher’s Bar and on the golf courses one can see the unprecedented concentration of politicians and distinguished public servants, top judges, bankers, entrepreneurs, lawyers and lobbyists. Such people regularly meet in Prague, of course, but in Karlovy Vary they tend to make deals and settlements very quickly and effectively.

Unfortunately for the participants, everyone sees everything. Secret or unpublicized good relations, which for some can lead to scandal, are discovered, but this is part of the Czech reality. For example, it would be interesting to know what the once powerful lobbyist Roman Janoušek was talking about with the deputy of the Prague High State Prosecutor Libor Grygárek.

Who is in the Czech “extra league”? The main host was the head of the KVIFF’s general partner, ČEZ, Martin Roman. Among the Czech billionaires on hand were, for example, Marek Dospiva from Penta; along with a good-sized posse of his managers was industrial baron Karel Komárek, whose KKCG group is among the festival sponsors, Richard Háva, known mainly as an arms dealer; and the aforementioned Roman Janoušek. After parking his luxury black Mercedes before the Pupp, a buzz could be heard in the hotel corridors: “Romeš has arrived” and “Romeš is here already!” The question is whether among the billionaires it is possible to include the Prague politician Tomáš Hrdlička (Civic Democrats, ODS); in any case, he made his presence felt.

Among the entrepreneurs whom the media sometimes refer to as “ODS godfathers” was the Prague businessman Ivo Rittig; Plzeň was represented by the ODS executive committee member Roman Jurečko.

The richest living Czech, Petr Kellner, did not attend the KVIFF but his PPF Group was represented by top manager Martin Štefunko. The coal baron Zdeněk Bakala (New World Resources) has not put in an appearance for a number of years now while Agrofert head Andrej Babiš has studiously avoided the festival.

But a number of interesting foreign businessmen were in attendance, including the chief of the Hungarian oil & gas concern MOL, Zsolt Hernádi, and Slovak billionaire Oszkár Világi, an ethnic Hungarian who is general director of Slovnaft, MOL’s petrochemicals unit. Both men met with Richard Háva, to quietly discuss the forthcoming privatization of the Czech firm Čepro.

And the politicians and state officials? Of course the Czech head of state, President Václav Klaus, was not going to miss it. Otherwise, above all MPs from the two biggest parties, the center-right ODS and main opposition Social Democrats (ČSSD), descended upon the famous spa town. If we don’t count Háva’s, the old friend of Finance Minister Miroslav Kalousek, and lobbyist Michal Kuzniak, ODS’ junior coalition partner TOP 09 was not represented at Karlovy Vary while the smallest party in government, Public Affairs (VV), was also conspicuously absent (apart from Michal Moroz, the former deputy interior minister, who is said to play an inter-ministerial role as a Vít Bárta). As for the ČSSD, party chairman Bohuslav Sobotka and MP Lubomír Zaorálek put in appearances.

Miroslava Němcová, speaker of the lower house of Parliament, was also present but looked as if she would rather be somewhere else — perhaps due to her colleagues displease over her siding with Bárta in a recent vote. The Prague “grand coalition” was represented by Mayor Bohuslav Svoboda (ODS) and his deputy Karel Březina (ČSSD). European parliamentarian Jan Zahradil (ODS) came all the way from Brussels.

On the other hand, statistician Jan Fischer, who served as prime minister in a caretaker government and is now an EBRD vice president, was greeted with a standing ovation ahead of the opening ceremony — a sign that he is a real contender to become president of the Czech Republic in 2013. For that to happen, however, ČSSD leader Sobotka and his first deputy Michal Hašek must agree to put him on their short list.

Now to the main issue at hand. What did the above group of influential partygoers resolve? Or which decision-making processes are now in full swing?

Among the short-term issues is the question of whom to name head of Czech public television (ČT) after the departure of Jiří Janeček. Perhaps Petr Dvořák, the former head of TV Nova, who hired the lobbyist Jana Marcová? Or the head of ČT’s new media unit, Milan Fridrich? Or the current head of communications at RWE Transgas, Martin Chalupský?

From the discussions it’s clear the chosen one must be friendly to big business. The fat cats also debated the question of who will lead the national public radio, Český rozhlas, but with less intensity.

Another short-term issue was the selection of a new head of the Energy Regulatory Office (ERÚ) as Josef Fiřt has exited. Prime Minister Petr Nečas (ODS) has neglected to resolve this and since July 4 the key post has been vacant. He also doesn’t know whether his government will approve the candidate or President Klaus will. Big players on the Czech energy market are vying for the ERÚ chairmanship.

To sum up, it wasn’t peaceful in Karlovy Vary. Practically from dusk to dawn, the air was full of politics and business. The results will be seen in time. Until next year…