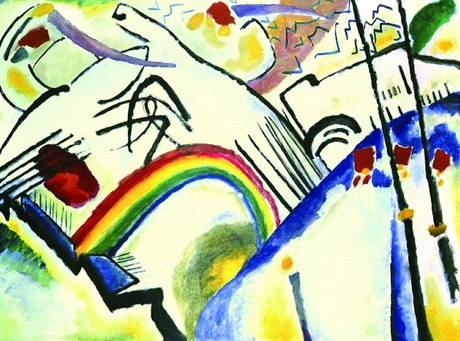 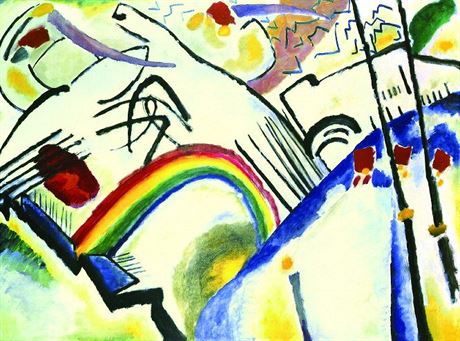 Wassily Kandinsky’s painting “Battle (The Cossacks)” is now on display at the Czech National Gallery’s collection of modern art at Veletržní palác. The painting is a loan from London's Tate Modern gallery and will be exhibited in Prague until June 12.

Normally, the loan of a single painting does not garner much attention, but Battle is a milestone not only in the Russian painter’s development, but in the emergence of abstract art in the early 20th Century. Painted in 1910 or 1911, just around the time Kandinsky experienced a breakthrough after having heard the atonal music of his contemporary Arnold Schoenberg, it shows him coming to the verge of pure abstraction, with only traces of the figural elements such as Cossacks hats and birds, being visible in the painting.

‘His turn to abstraction is one of the big stories of 20th Century art.’

In presenting the painting, curator Olga Uhrová pointed out a nearby tableau of Kandinsky’s development showing the key place “Battle” holds. For the National Gallery, Uhrová also highlighted how a fuller view of Kandinsky helps shed further light on František Kupka, the Czech abstract painter whose work the museum has in abundance.

“His [Kandinsky’s] turn to abstraction is one of the big stories of 20th Century art,” said Tomáš Vlček, director of the collection of modern and contemporary art at the Czech National Gallery in Prague.

Vlček added that Kandinsky’s relation to ethnic art, so vital throughout modern art, was particularly strong given that he was an ethnologist before turning to painting at the relatively late age of 30. The intersection of western rationalism and colorful forms from his native Russia were another feature Uhrová indicated in presenting “Battle.”

Interest in Kandinsky and the moment in modern art he represents seems to be at a high point. He had a massively successful retrospective at the Guggenheim Museum in New York in 2009–10 and is currently included in a show there called The Great Upheaval, in which Kupka is represented as well. The Phillips Collection in Washington, D.C. is preparing an upcoming solo show, and Museum Kampa in Prague is scheduled to hold an exhibition called “Kandinsky, Schonberg and Kupka” starting in May.