Anthology of stories inspired by Franz Kafka presents everything from giants, bug people, and superheroes to a Kafka gone Hollywood 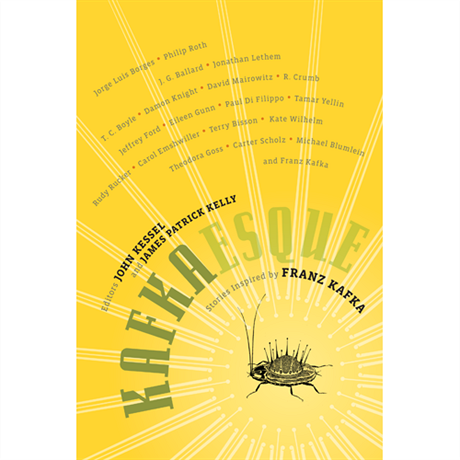 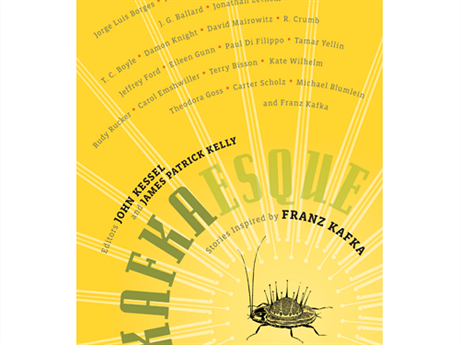 It begins in Prague’s Old Town of the well-known cobblestone, labyrinthine streets, where Franz Kafka was born and raised, but in this case refers more to the city of crystal ashtrays, miniature stone Golems, Kafka tee-shirts and guided tours. As the editors of “Kafkaesque: Stories Inspired by Franz Kafka” point out in their introduction, “we suspect that no writer who ended his life as obscurely as Kafka has had his reputation expand so far, so quickly into the popular consciousness.”

Of course it is not only as a synonym for the surreal and alienation that Kafka has proven to have had a lasting effect almost 130 years after his birth. He might be the most influential writer of the 20th century, though not everyone agrees with this – a notable example being novelist Zadie Smith, who wrote in an essay that only a small handful of writers “have successfully ‘channeled’ the Kafkaesque in any meaningful way.”

The current anthology from Tachyon Publications does not aim directly at countering Smith’s assertion that Kafka’s “imitators are very few.” The book contains generally lighter fare than works by the writers such as W.G. Sebald and Thomas Bernhard who Smith mentions, yet the extremely varied and entertaining stories it contains help clarify Kafka’s literary legacy in a way as well.

With the exception of the well-known Borges story “The Lottery in Babylon,” all of the stories were written in English, with many coming from recognizable names in American fiction such as Philip Roth, Jonathan Lethem, and T.C. Boyle. Whereas many writers most strongly influenced by Kafka have lived through some of recent history’s darker chapters — examples being the Yugoslav Danilo Kiš, Milan Kundera and Latin American writers such as Gabriel García Márquez — this generally was not the case for their American and English counterparts, a fact which may account for the lighter-hearted take on the Kafkaesque found in this Tachyon anthology.

The sheer variety of stories makes the book a delight to read as well as indicating what a vast resource Kafka’s work remains for writers. There are tales of the fantastic such as J.G. Ballard’s “The Drowned Giant,” in which an unnamed narrator describes a giant who washes up on the shore and the matter-of-fact manner in which crowds come to climb and linger on his corpse.

Michael Blumlein’s riveting “Hymenoptera” is even more closely connected to Kafka through the figure of a giant wasp that appears to a fashion designer as a spark of inspiration, compelling him to design an entirely new collection in a state of feverish excitement. Damon Knight’s “The Handler” brings out the social awkwardness known as much from Kafka’s diaries as from his fiction in a grotesque story of human puppetry, in which all the reader’s pity is reserved for the puppet master.

To what degree these bizarre stories are Kafkaesque is a relevant question. Many of them seem equally as evocative of Hoffmann or many of Kafka’s contemporaries who were trying to push the envelope of the fantastic story into the modern age. Regardless, just asking that question is a way of better defining just what kind of writer Kafka really was.

I knew Kafka, and you, sir, are no Franz Kafka

Another set of stories actually include Kafka as a character. While these stories hold the least stylistic resemblance to Kafka’s writing they are probably the most enjoyable in the collection to read. For the most part, these stories have Kafka leaving Prague, surviving tuberculosis and the Holocaust and coming to settle in the US (with the exception of Tamar Yellin’s “Kafka in Brontëland,” which has a silent old man named Kafka living in Yorkshire, and which somehow seems the most understated and believable of the group).

What makes this group of stories so strong — and contrasts it with some of the collection’s weaker selections— is the degree to which their writers seem to have internalized Kafka’s themes. Everyone knows about the cockroach in “The Metamorphosis” and the absurd logic of “The Trial” and “The Castle,” but to go beyond trite imitation and cliché requires a deeper reading.

And it is not only Kafka’s work they have thought about, but his life. In Jonathan Lethem and Carter Scholz’s “Receding Horizon” as well as Roth’s “‘I Always Wanted You to Admire My Fasting,’ or, Looking at Kafka,” Kafka has survived at the price of not becoming the immortal writer Kafka but, in Roth’s case, a Hebrew teacher living in New Jersey.

“Receding Horizon” plays with a brilliant series of parallels in making renamed Prague-born American immigrant Jack Dawson (son of a jackdaw and, coincidentally as the editors point out in their comments, the name of Leonardo DiCaprio’s character in “Titanic”) the man whose Kafkaesque “Judgment” treatment becomes the screenplay for Capra’s “It’s a Wonderful Life.”

The least effective stories in “Kafkaesque” are those that aim directly at specific Kafka stories. T.C. Boyle’s dismal “The Big Garage,” in which an inaccessible garage stands in for the nightmare of Josef K shows how far the Kafkaesque can go from even the slightest trace of Kafka himself. Paul Di Fillipo’s superhero story “The Jackdaw’s Last Case,” though vivid in parts, is an endless stream of Kafka in-jokes and intentionally dated period slang.

Other gems included in the anthology are Terry Bisson’s hysterical parody “The Cockroach Hat” and Jeffrey Ford’s “Bright Morning,” a story in which the notion of the Kafkaesque is tackled head on with haunting and surprising results.

Milan Kundera | Franz Kafka
Vstoupit do diskuse (1)
Registrace: smskou dopisem
kafkaforourtime An inspiration Kafkas work is an inspiration, and its great to see so many... 14:19 26.10.2011