Overall trust in ministers drops, with just one barely squeaking past the 50 percent mark, according to a new poll 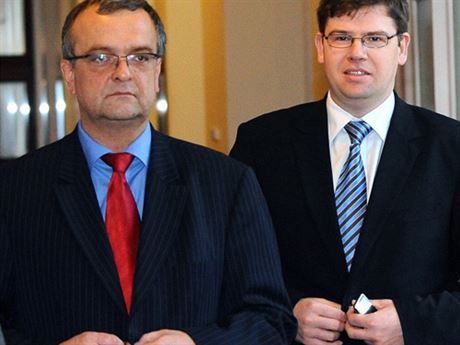 The only government minister to be trusted by a majority of Czech people is Justice Minister Jiří Pospíšil (Civic Democrats, ODS), a poll by the Center for Analysis and Empirical Studies (SANEP) released Jan. 23 shows — and even he just barely made it past the threshold, garnering 50.4 percent.

“Pospíšil’s success may be due to the fact that in his years in high-level politics he built a very good media image and is perceived of as a decent and capable politician,” SANEP said in a summary of its results. “In addition, his ministry and his reforms to the justice system are still being prepared, so he does not face constant attacks by the media and the opposition.”

Pospíšil was followed by Foreign Minister Karel Schwartzenberg (TOP 09), who scored 44.7 percent. “Due to his charisma and undeniable moral and ethical principles, [Schwarzenberg] has long been one of the most popular Czech politicians. He maintains high political credit not only as foreign minister but also as chairman of TOP 09, which under his leadership has become a respected right-wing government coalition party,” the SANEP summary said.

“Karel Schwarzenberg can certainly be seen as a political phenomenon and a respected personality in the Czech Republic and abroad,” it continued, pointing out that he was in third place in an August 2010 ranking with 49.4 percent.

“The third-highest rated member of the government and the biggest surprise was Minister of Transport Vít Bárta (Public Affairs, VV),” SANEP said. Bárta was trusted by 37.5 percent of the poll’s respondents.  “In August last year, [he] ranked 10th place (with 28.5 percent). We can say that for his relatively short exposure in high-level politics, he has earned a reputation as a tough and capable minister. … Whether his sharp rise can avoid [being damaged by] the scandal with security agency ABL, formerly owned by Bárta, will be seen as the case evolves,” SANEP said.

ODS leader and Prime Minister Petr Nečas came in fifth place, and second among coalition party leaders with 33.8 percent of respondents expressing trust. In August 2010 he was in fourth place with 47.6 percent. SANEP pointed out that his standing was hurt by coalition disputes, as well as by the economy. “Nečas … is the face of unpopular austerity measures and reforms in government; the downside is an apparent decline in trust,” SANEP said.

Radek John, the leader of the Public Affairs party and minister of the interior, saw a substantial drop in his support. He fell to 24.7 percent and 10th place in the current poll from 34.9 percent and sixth place in the August ranking. “We can say that Radek John did not maintain the high favor that he enjoyed before the elections,” SANEP said.

Undoubtedly, the biggest drop since the August poll was for Minister of Finance Miroslav Kalousek (TOP 09), who fell to eighth place with 26.5 percent in the current poll from first place with 57.2 percent.“This decline is most likely due to his relentless attitude toward saving reforms, which affects the wallets of most inhabitants of the Czech Republic,” SANEP said.

The lowest ranking went to now-former Environment Minister Pavel Drobil, who was trusted by only 14.9 percent of respondents. Among those who are still serving, Regional Development Minister Kamil Jankovský was last, with 18 percent. SANEP attributed this in part to his not being very well known.

“The overall evaluation, when compared against August [2010] shows that confidence in the Cabinet has been decreasing, which corresponds to the majority of people negatively perceiving the government,” SANEP said.