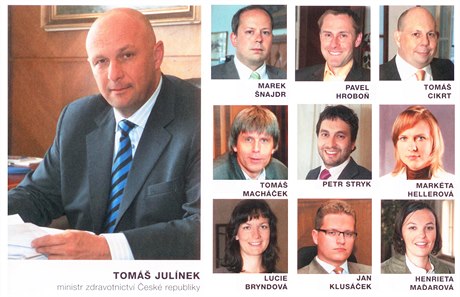 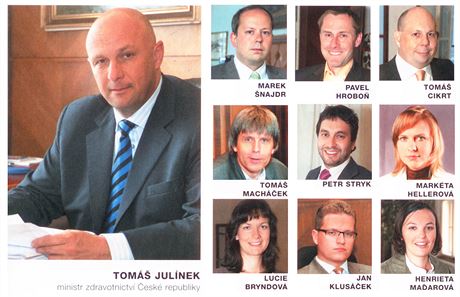 Former Minister of Health Tomáš Julínek has had an difficult year. From last January, when he was withdrawn from his post, until this October he was still the Civic Democrat (ODS) senator for the Brno-venkov district in South Moravia. But after 12 years in the Senate, he was defeated in the fall elections by Social Democrat (ČSSD) candidate Jan Žaloudík.

Julínek seems to be unsure of what direction to take. “I haven’t any statement for journalists yet,” he said curtly when approached for an interview. He only revealed that he is still seeking a job in the private sector, and it would logically be related to health care.

Many of his former subordinates at the ministry have already landed on their feet. Julínek’s former first deputy, Marek Šnajdr (ODS), for example, was re-elected chairman of the board of directors of dominant health insurer Všeobecná zdravotní pojišťovna (VZP) in October; he is also an MP, vice chairman of the parliamentary health committee and a member of the budget committee.

Markéta Hellerová, the former deputy health minister, has been successful, too. Until recently, there was speculation that she could become director of the Thomayer Teaching Hospital in Prague. Instead, in mid-November, Hellerová became mayor of the municipality of Zdiby, where she ran for office on the ODS ticket.

Hellerová was the only member of Julínek’s team to remain at the ministry until this September, when current Health Minister Leoš Heger (TOP 09) fired her. This gave rise to heated discussions among the ODS. “The recalled Deputy Minister Markéta Hellerová is not only a respected specialist but also a representative of the strongest coalition party at the ministry,” Šnajdr said at the time.

Rush to the private sector

Pavel Hroboň, the then-deputy minister for health insurance, stayed on at the ministry until the arrival of Heger’s predecessor, Dana Jurásková. Hroboň has remained in the health sector and this September was appointed aide to Minster of Labor and Social Affairs Jaromír Drábek (TOP 09), in charge of health and social care.

In an interview for Czech Position, Hroboň said that he considers his post at the ministry “supplementary” to his business activities. He and his two former colleagues from Julínek’s reform team founded the Advance Healthcare Management Institute, of which Hroboň is director. The company provides educational programs for managers and top executives in the health care sector.

The co-founder of Hroboň’s company is Henrieta Maďarová, a former adviser to Julínek. Within the educational program, she works as project manager and is in charge of matters relating to health care economics and analysis of health care systems, financial management and customer relations management.

Another of Julínek’s aides, Tomáš Macháček, has become involved in the joint venture, too. He primarily deals with analysis of health insurance systems and health care system financing, with a focus on new trends. At the same time, Macháček is managing director of KlientPRO, a company specializing in the development and administration of health care projects.

Hroboň told Czech Position that in tandem with Macháček he intends to revive the activity of the association Reforma zdravotnictví–forum (Health Care Reform–Forum), which they established with the reform task force in June 2004.

Cikrt stays in the media business

Under Julínek, Petr Stryk was director of the Office of the Ministry of Health. After, together with Julínek and his spokesman, Tomáš Cikrt, he left his function. Dana Filipiová, the health minister who replaced Julínek, installed the former adviser to the minister for legal support of reform, Jan Klusáček.

Klusáček did not remain in his post for long and after about four months became director of the legal section at the ministry. In September this year, Klusáček left his post. In the lobbies speculation is rife as to his return.

The last of Julínek’ advisers, Lucie Bryndová, is now on maternity leave.

The media face of the former team, Cikrt, has remained in his profession. For more than one and a half years he has worked as spokesman of Medigroup. The company operates a group of health care facilities, most notably the hospitals in Nymburk and Český Brod, Central Bohemia. In addition, six times a month Cikrt presents the “Interview Z1” program on the privately owned television news channel.

In cooperation with the State Institute for Drug Control, Cikrt is now completing a public information brochure about pharmaceuticals. Cikrt said he has put on a bit of weight but, on the other hand, is not so overburdened by work and has more time to spend with his family.

On several occasions, Julínek has offered current Health Minister Heger a helping hand in creating health care system reform. Heger, however, has plunged into it himself, and essential changes are expected to be felt next spring. The first deputy minister is Vladimír Pavelka, like Heger, an MP for TOP 09. Vítězslav Vavroušek, a former ODS senator, has become deputy for health care, while the post of deputy for health insurance is held by Petr Nosek.

Martin Plíšek is deputy for legislation and law. The brand-new post of deputy for information was taken up in the summer by Jiří Schlanger. Currently, Minister Heger has no aides. “The posts have not been abolished. It’s just that they are not occupied at the moment. The situation may be different in a month’s time,” Ministry of Health spokesman Vlastimil Sršeň told Czech Position. The head of the office of the ministry is Jan Růžička.