Irish writer John Banville, winner of the prestigious Franz Kafka Prize, is speaking tonight at the Prague society that awarded it 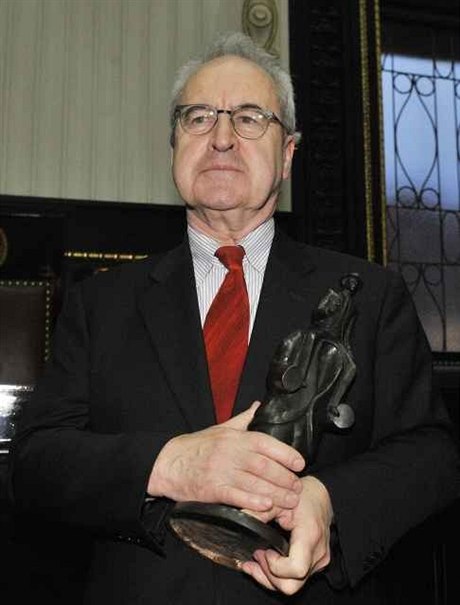 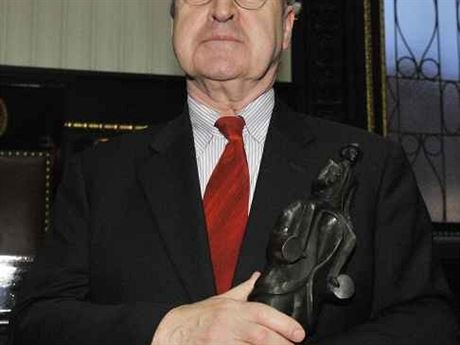 Irish novelist John Banville was presented the 11th annual Franz Kafka Prize on Tuesday by the Franz Kafka Society, with various Czech dignitaries in attendance. The ceremony took place in Prague’s Old Town Hall, and the internationally celebrated writer, critic and author of a book on Prague spoke about how he imagined the proceedings would have struck their namesake.

Chairman of the Senate Milan Štěch began the official ceremonies by stating that he is not a literary critic or literary theorist, but an ordinary reader. For that reason, he said he was pleased that the Kafka Prize went to a writer like John Banville, who he considers someone who “doesn’t only do literature for literature’s sake” and is not an obscure choice of elite critics, but of common, everyday readers.

Readability seems to be the subject of the month following the controversy over the recent Man Booker Prize and criticism that the jury, headed by former director general of MI5 and successful spy novelist Stella Rimington, chose accessibility over quality in coming up with a shortlist that left off some prestigious names. So when a rival literary award, The Literature Prize, was announced to aim for higher literary standards one of its advisory board members was former Booker winner John Banville (who won for “The Sea,” 2005).

In a quote in The Independent described as a “lukewarm endorsement” of the new prize, Banville said, “I am told that someone attached to the Man Booker this year spoke of the need for novels with more ‘readability’ – a peculiar term – but whether this indicates a fall in standards I don’t know. … I lent my name to the new venture because I respect Andrew Kidd [one of the prize’s founders], who used to be my editor at Picador, and because I’d be very glad if there were to be a prize meant specifically for ‘literary fiction,’ though this is another term I find peculiar.”

Holding Banville up as an example of a writer for the common reader is somewhat ironic considering his 2005 Booker victory invariably comes up as an example of the prize still going to difficult, even inaccessible novels. It is also worth noting that according to Štěch’s criterion of readability, Kafka probably could not have won his own prize — an irony that is about as Kafkaesque as you can possibly get.

André Derval, a publisher and literary critic, spoke on behalf of the jury that chose Banville for this year’s prize. Firstly, he placed Banville in the tradition of Irish writers who write in English, a language imposed on them from outside but on which their small island has had a disproportionate influence.

“John Banville has become the leading novelist of his generation,” Derval said. “His works have prompted critical reflection in all corners of the globe.”

Derval mentioned two of Banville’s novels in particular. One was his most recent work, “The Infinities,” (2009) in which the Greek god Hermes narrates a modern story set in a parallel universe powered by cold fusion in which steam trains still exist. The other was the 1997 novel “The Untouchable,” which creates a fictional stand-in for the notorious British art historian and Soviet spy Anthony Blunt.

“Banville is the ultimate example of a postmodern novelist,” Derval said. Other jury members that chose this year’s prize included German literary scholar Kurt Krolop and Czech playwright and former dissident Jiří Stránský, both of whom attended the ceremony, as well as publisher John Calder and German literary critic Marcel Reich-Ranicki, among others.

While Derval’s attempts to indicate some similarities between Banville’s work and that of Kafka’s was probably a bit of a stretch, he does have a prior relationship with the city of Kafka’s birth, having published “Prague Pictures: Portrait Of A City” in 2003 as part of Bloomsbury’s Writers and the City series. In it Banville recounts coming to Czechoslovakia for the first time during a winter in the early 1980s.

Previous Kafka Prize winners include Philip Roth, Ivan Klíma, Péter Nádas, Haruki Murakami, Yves Bonnefoy, Arnošt Lustig and Peter Handke. In the years Elfriede Jelinek and Harold Pinter won the prize they also went on to win the Nobel prize. Last year’s Franz Kafka Prize winner was former Czech President Václav Havel. The 2011 award was first announced in April, on the occasion of which Banville stated how much an award named after Kafka meant to him.

The prize comes with a miniature sculpture of the Kafka monument that stands outside Prague’s Spanish Synagogue as well as $10,000.