Japanese bridge from Prague to Tokyo 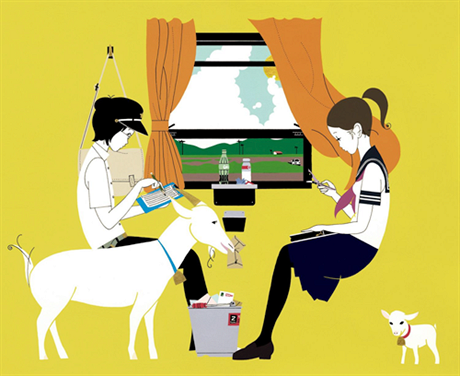 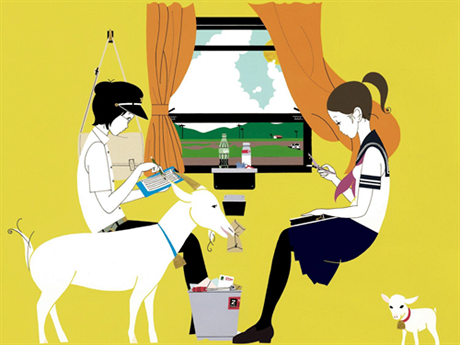 Things Will Never Be The Same: Back and Around is more than an exhibition of Japanese art and design. By including the work of Japanese artists Yusuke Nakamura and Ayako Takagi as well as the paintings of Jiří Votruba, the show becomes a take on East-West artistic styles in the increasingly open space of modern image making.

“I think it’s interesting to get these three artists together. It shows the influence of European, American and Japanese art on contemporary artists,” the exhibition’s curator, Martin Dostál, told Czech Position.

Dostál further sees the trends reflected by the Czech and Japanese artists in the exhibition as showing the dynamics between traditional and contemporary art, where traditional Japanese masks appear in the work of Yusuke Nakamura alongside fashion accessories and machine guns.

Another example of this is how the full-length portraits of Jiří Votruba are flattened of their traditional depth to the point of looking like hybrid Euro-Japanese images, which leads to another trend Dostál sees these artists as highlighting between High art and illustration/design.

This exhibition represents the first European appearance for the work of Yusuke Nakamura, a rising star in the Japanese art world. Nakamura’s colorful pictures incorporate the look of comic book art along with more surreal and traditional artistic elements, resulting in a unique visual style. Animals form a major part of the works, often in unusual form such a bear in spectacles posing for a photograph with a small girl or a giant tortoise being taken for a walk in the Halloween-themed picture “October.”

More than just bizarre and striking images though, Nakamura’s pictures show a broad range – from the decorative beauty of “Camellias” to pop culture imagery to realistic scenes of Japanese streets. Dostál says that the work in the show represents individual pictures as well as book, magazine and CD covers to give a full picture of the artist’s work.

Ayako Takagi’s work is also very recognizably Japanese, consisting of horned, devil-like figures arrayed in various groupings. Hanging in the windows of the Czech Centre the figures drew the constant attention of passing children. The figures are reminiscent of comic book characters as well as graffiti in their simplicity of form.

The sole Czech artist in the show, Votruba’s work in Japan began when some Japanese admirers of his work led to an invitation for him to visit the country. Ten years later the results have led to a convergence of styles and what he told Czech Position is a chance to take part in a culture that is highly attractive to Czechs and Europeans. “It’s a culture that feels like it has a secret behind it,” he said.

Votruba’s paintings evidence an obvious tribute to Japanese art and design in both subject and style. Many of his portraits are of Japanese artists such as Usama Tezuka, the father of Japanese comics, depicting the artist as a comic book character himself. Votruba also paints two portraits of Ayako Takagi, one showing the artist floating above a city while in the other she stands beside one of her figures.

Stylistically, Votruba takes on many of the motifs of Japanese design without in any way giving up his own unique viewpoint. In his portrait of “Kero Kitagawa” he paints an internationally decked out young Japanese woman with characteristically Japanese comic book figures floating in the air around her.

“You can see some Japanese thinking in Jiří Votruba’s work,” Dostál said.

According to Dostál the cultural connection between the two countries has a pedigree that goes back much further than comic books. “There was a good connection between Czech and Japanese culture from the end of the 19th century – not only Japanese, but also Chinese – and I think it’s necessary to make this connection with contemporary artists too,” Dostál said.

The exhibition will further this connection early in 2012 when it travels to the Czech Centre Tokyo.

Things Will Never Be The Same is also part of the Autumn with Japanese Culture program (Podzim s japonskou kulturou) taking place through October 2011. Events include the “Music & Rhythms of Tokyo,” a concert of traditional Japanese vocal music and other performances and exhibitions.