Early May marks the end of World War II; city districts are stepping in to remind passersby of long-gone and often unknown heroes 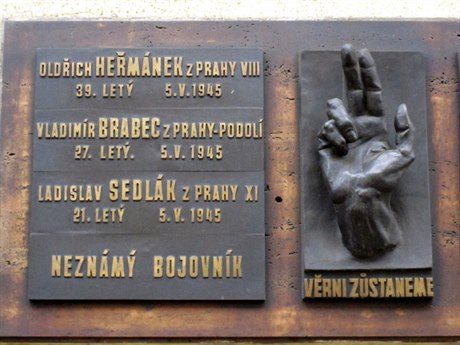 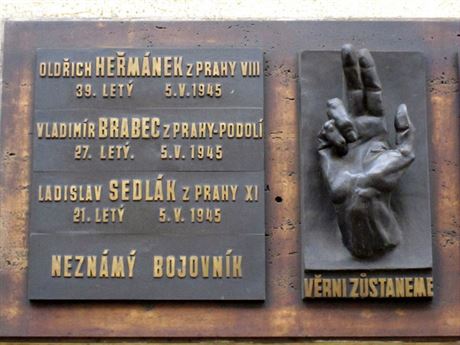 It is easy to walk past them without noticing. Marble and metal plaques to mark the victims of World War II can be found on residential buildings, fences and walls all across Prague. Some have quite specific details of a person’s life and death. Others refer cryptically to unknown heroes. The majority are for people who died during the Prague Uprising, which happened on the last few days of the war in Europe, from May 5 to 8, 1945. One of the side effects of living in Prague for any length of time is that there are so many memorial markers, they start to blend into the background — they become virtually invisible.

“In May the plaques are decorated with wreaths,” said Vladimír Štrupl, the spokesman for the civic organization Spolek Pro Vojenská Pietní Místa (Society for Military Memorial Sites). “In the past it was done by the ČSBS (Czech Union of Freedom Fighters), but now it is done by the owners, mostly the individual city districts.” The wreaths and flowers help to draw attention to Prague residents who lost their lives.

Because the care for the plaques and other memorials to victims of World War II has become decentralized, it is hard to come by a number. Štrupl estimates there are more than 1,000 plaques for World War II victims.

According to military experts, some 1,694 resistance fighters were killed and another 1,600 wounded. Some 300 members of the Russian Liberation Army died, and an additional 30 members of the Soviet Army as well. No plaques mention the causalities for the German Army, estimated at about 1,000.

Spolek Pro Vojenská Pietní Místa operates a website with pictures and what details are known about the plaques and other monuments. Tracking them to GPS coordinates is an ongoing project. The site catalogs more than 2,400 memorials of all kinds from both World Wars and other conflicts, plus memorials in Prague cemeteries.

The building plaques, though, are concentrated where the fighting in the Prague Uprising was the most intense, Štrupl said. Fighting was fierce around the Czechoslovak Radio building in Prague 2 and throughout parts of Prague 1, with pockets of fighting in Prague 10 and other districts, including a bridge near Troja. One you start searching for them, they become ubiquitous: Markers can be found as far south as the edge of Zbraslav, and in upscale as well as traditionally working-class areas.

Surveying the plaques reveals a variety of designs. The easiest ones to spot — and most common — are white marble ones with a simple black text. The phrase “Čest jeho památce,” meaning “Honor his memory” can be found on many of the plaques, regardless of the design. Another common phrase is “Neznámý hrdina” or “Neznámý bojovník” meaning “unknown hero” or “unknown warrior.” When known, there is a name and a date.

For those who fell in May 1945, usually there is the phrase “Zde padl v pražském povstání” or “Zde padl v květinové revoluci,“ meaning “Here fell during” and then either “the Prague Uprising” or “the May Revolution,” the two names for the fighting. Slightly more elaborate ones are bronze, with a right hand in high relief raising two fingers and the phrase “Věrni zůstaneme,” or “We remain faithful.”

For the causal observer, the most interesting ones are those with a bit more information — the age and occupation of the fallen hero, or a small picture. One of the saddest is a bit off the beaten track. In the Hrdlořezy section of Prague 9 on the side of a rundown small house is a memorial for an 11 year old boy, with his portrait etched in the black stone. The text says: “May 7, 1945 / A young life ended in this house / a Nazi assassin’s bullet hit a promising young boy / Karel Houška /11 years in youth.” If he had lived, he would be around 78 years old today.

Closer to the city center, near Újezd in Malá Strana there is one with a black-and-white picture of an attractive young woman. This one points out that Viktorie Krupková , a conservatory student and member of the radio, sacrificed her young life for her country. She was 23 years old.

While Prague has a great number of plaques for all kinds of historical figures, the war memorials make a significant proportion. In Prague 2, for example, just over half of all the district’s memorial 109 memorial plaques — 55 — are for victims of World War II. The others are for local celebrities, according to Irena Vinogradová, an information officer from the schools and culture section of Prague 2. While the district is responsible for the war memorial plaques, it has no records regarding their origin. “The district only has records from 1960 onwards,” she said.

Štrupl said that majority of the plaques were put up by the Obecní národní výbor (ONV, or Municipal National Committee) for each section of Prague in the years following the war. These committees ceased to exist at the end of the communist era. Sporadically, though, some plaques cite chapters of the Czechoslovak Communist Party or other groups such as the Women’s Commission of the Social Democrats as the source.

Theft of the plaques isn’t very common, but it occurs from time to time. “Damage to the memorial plaques is mainly due to weather, and rarely done intentionally. Theft occurred recently in Prague 2 in two cases. It was always a bronze plaque; they were replaced with marble copies,” Vinogradová said. Bronze is sold for scrap metal.

While the war ended more than half a century ago, once in a while a new memorial is made. “Recently, a plaque was put up as a private initiative,” Vinogradová pointed out. An international project has recently and added a new type of memorial. “Metal markers called ‘Stolpersteine’ are being placed by the registered civic group Stolpersteine CZ,” she added.

These metal blocks, which resemble paving stones, are placed in front of houses where victims of the Holocaust lived. The name Stolpersteine roughly translaters as “stumbling block” but is also rendered more poetically as “stones of the missing.” So far, the project has placed more than 30,000 stones in 530 cities.