This restaurant within a former cloister wine bar sets its sights high; given its prices you’d expect something outstanding 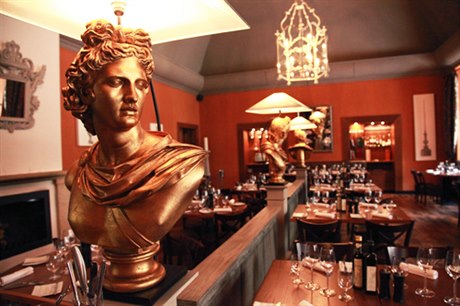 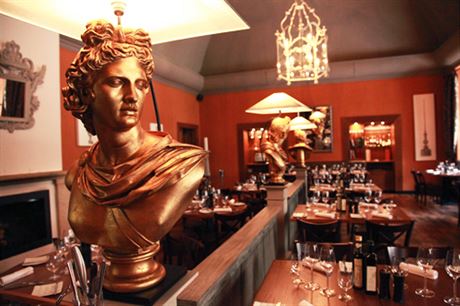 December saw the official reopening of the former cloister wine bar, an event participated in by Cardinal Vlk amongst others. The establishment is now run by Coloseum Restaurants. Regulars of the original wine bar may be in for a surprise. Only the name – Il Convento, or cloister – is reminiscent of their original hangout, and even then you’d need a knowledge of Romance languages to realize it.

We weren’t there to improve our language skills but to sample the quality of the cuisine. But first we took a look around. The huge vaulted room we found ourselves in is dark and somewhat oppressive during the day. This is partly because the roof has been uniformly painted in steel grey (a shame given the wonderful stucco decoration, which now only an acrobat hanging on a horizontal beam would notice), and partly because of the dark furniture and floor. It seems that the designer was determined that the cloister remain a cloister.

However, a lot of care has gone into the lighting. Three columns dominate the centre of the restaurant with gilded busts of ancient youth, from whose heads protrude a metal pole tipped by a pyramid shaped lampshades. As well as this ingenious lighting system the interior features two cage-like two-tiered chandeliers with glazed sides and several hefty stands bearing even heftier candles, dangerously reminiscent of Easter candles. There is also a hearth, a welcome attraction on winter days, with a large supply of wood giving (or attempting to give) the impression that this is put to use.

A happy choice to begin with: Vichyssoise

There is no problem finding a seat. With a wave of the hand the waiter indicates that we can sit where we want. At lunchtime only one table seems occupied. With some trepidation (the hall reminds us of the banqueting hall at Bluebeard’s Castle) we opt for a large table by the barred window (as close as possible to a source of natural light).

As a started we order Vichyssoise soup (Kč 195) and Burrata with aubergine caviar and dried pepper sauce (Kč 315). Soon after we receive a gift from the kitchen – an amuse bouche in the form of a slice of venison pâté with balsamic reduction, sprinkled with ground salt. This little gem has a strong flavor of game, and as well as the meat we find specks of green herbs and a sprinkling of radish shoots and water cress, which lend the chef’s greeting a suitably piquant zing. We’re also impressed by a basket containing several types of bread, all of them tasty, though somewhat sweet and cake-like.

The Vichyssoise soup is hearty. The subtly foamy cream has the expected consistency and a slightly sour flavor. We can make out potatoes, leek and cream, and noodles of julienne-style leek cooked al dente have been added to the traditional recipe, all of which add structure and firmness to the soup. Other unusual ingredients are also a pleasant surprise – radish sprouts and flakes of lettuce along with chunks of crabmeat. The overall impression is positive, though the price of Kč 195 seems somewhat excessive. Apart from a few chunks of crab each of the raw ingredients only costs a few crowns...

In the meantime the second of the starters has been placed before us on a rippling rectangular plate. At first sight it seems simple enough. The Burrata lies in the centre of the white porcelain like an intact egg. On the left there is a mound of the aubergine caviar with a mixture of green and violet fresh bitter bean sprouts, on the right is a small salad comprising various types of salad and chicory. The pepper sauce was used to sketch horizontal streaks in the upper part of the plate. All in all the creation is a kind of incoherent attempt at both the minimum and maximum: there is more than enough Burrata given the paucity of the admittedly tasty garnish. In the end it’s as much as we can do to finish the bare cheese, and it doesn’t leave us much room for the next course.

The halibut is a catch

The game looks most attractive. It comprises a split saddle of venison cooked medium rare to rare, which is ideal for game. The wonderfully tender meat has a typically animal flavour, though something bothers us – it is overly salted. At first we suspect this is the fault of the sauce, but after delving more deeply we discover that the meat is to blame. The outside tastes as if it has been injected by a solution of pure salt. This is a real shame and ruins the overall effect.

On the other hand, the pyramid of small cubes of root vegetable with béchamel and chervil is so bland that it reminds us of baby food. Could this be the influence of the overly salty venison? Nor is the spongy morel up to much – mushy, soggy, though admittedly tasty. Two small agnolotti pastries of thin noodle dough stuffed with wild mushrooms are good enough, though the saltiness of the meat has rendered our taste buds useless, and all we yearn for is water and a piece of bread to take our minds of it.

Luckily we fare better with the other main course. Without further ado we should say that the fish is a real catch. Beautifully tender white flaky meat on top of a heap of excellent steamed baby spinach, properly flavored with pepper and garlic. The sabayon rises up from rosé wine and is divinely light and relatively sweet, which surprisingly doesn’t seem to matter. The potato fondant is a trio of small potato medallions slowly cooked to a golden brown in butter.

Having previously complained about the overly salty venison, we are compensated in the form of a voucher which contains Prosecco (which we refuse with thanks: the day doesn’t end with lunch for us) and one starter, main course and dessert free of charge, which is a generous gesture on the part of the restaurant.

As well as an earlier recommended walnut cake with hot chocolate truffle (Kč 155), we order a raspberry mille-feuille with white chocolate foam (Kč 145). On the plate we find three familiar medallion shapes, this time made of raspberry foam slightly firmed up by gelatine, two crispy homemade cookies covered in castor sugar, three fresh raspberries and a scoop of raspberry ice cream with chunks of fruit, though the fruit tastes somewhat synthetic. Otherwise the lightness of the dessert makes it attractive. We could happily have done without the puddle of melted white chocolate (which definitely lacks a firm consistency).

The walnut cake in thick dark chocolate contains a touch of ground walnuts (we had imagined something more), is shaped like sponge cake and is genuinely warm. The dense chocolate truffle is tasty but too rich for the filling cake in our opinion. After lunch or dinner we rarely need to fill up. We prefer something light and refreshing. But this time it’s our fault. We should have ordered something different.

We finish up with an excellent coffee. Although it arrived without a glass of water, the milk was hot and foamy. We order the bill. Without our voucher, instead of Kč 1,500 we would have paid almost twice as much. These sorts of prices allow for no errors. All in all our impressions are somewhat mixed. Apart from the overly salty venison everything was basically okay, though when you’re paying around Kč 500 for a main course you expect something exceptional. With the exception of the halibut this wasn’t the case.

An extenuating circumstance might be that the restaurant has only been up and running for a short time. The current offer at the beginning of May is already considerably cheaper, with the price of main courses in the region of Kč 300 to 400. The service was friendly and the seating and temperature pleasant, though the decor was somewhat kitschy for our taste. However, the restaurant is still lacking that something which would persuade us to return, be this the cuisine, the atmosphere or creative desserts.