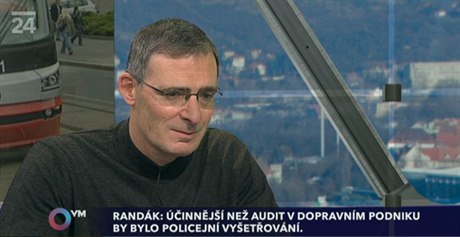 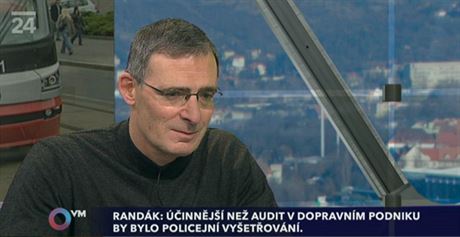 Karel Randák, former head of the Czech foreign intelligence service, the Office for Foreign Relations and Information (ÚZSI), and now member of the board of the National Anti-Corruption Endowment (NFPK), said in a television interview on Monday evening he is ready to accept that any politician may be involved in corrupt practices, including Czech President Václav Klaus.

Randák, who grew a beard to disguise himself when being promoted to the rank of general by President Klaus at Prague Castle in 2006, has in recent months been thrust into the public eye as a result of his work to expose graft. It was the NFPK that released documents which allegedly indicate that the Prague transport company (DPP) under its now-ex boss, Martin Dvořák, awarded lucrative contracts to non-transparent firms registered in off-shore havens, including the British Virgin Islands, and traced their ownership to the controversial ODS lobbyist Ivo Rittig.

Randák recently urged the authorities to take action over Rittig’s tax status arguing that the lobbyist, though officially resident in Monaco, spends more time in the Czech Republic than in the Mediterranean tax haven and therefore should pay taxes here.

Randák also alleges that the law firm Šachta & Partners, which represents Rittig, was instrumental in a scheme whereby he received Kč 0.17 crowns for every Prague public transport ticket sold. The law firm responded by launching a campaign in which they claim to protect citizens against illicit surveillance methods — alleging Randák uses such methods to gather information on people. On the campaign website site vasesvoboda.cz, Šachta & Partners published a photograph of him with former minister of interior František Bublan (Social Democrats, ČSSD).

In the interview on Monday evening Randák rejected Šachta & Partners’ claim and alleged the law firm had hired detectives to follow him. He said that he and Bublan are old colleagues and friends and that there is nothing illegal about him meeting with politicians. Partner of the law firm David Michal was invited to respond and flatly denied Randák’s claim that his law firm was following the former chief spy, but he declined to say how the pictures of Randák with Bublan were obtained.

A Prague Municipal Court ruling that came into effect last week has reinstated Rampula, who within days back on the job took the unprecedented step of filing a criminal complaint against deputy Supreme Public Prosecutor Stanislav Mečl, who had served as his temporary replacement until his return.

“I’m definitely on the side of Supreme State Prosecutor [Pavel] Zeman,” Randák declared. “There are too many suspicious cases in which Rampula is implicated,” he added.

Randák also answered a question about his view of recent controversial clemency granted by President Klaus to people convicted of various crimes:

“I must admit that some of the president’s steps give rise to doubts [about his integrity]. The crux was pardoning Anna Benešová from her suspended sentence so she could look after an ill family member. But she was given a suspended sentence so she would have been able to look after them anyway,” Rampula said of the president’s leniency towards the former director of the Metropolitan University Prague (MUP), who among other crimes was found guilty of embezzlement and offering bribes.

Since Klaus’ administration announced the pardon allegations have emerged that a bribe was paid to a member of Klaus’ team, and according to various accounts Benešová was a close acquaintance of the president’s wife, Livia.

“I’m prepared to admit that about anyone,” Randák responded when asked if he suspected Klaus himself was involved in corrupt practices.

Speaking generally about the current level of corruption in the Czech Republic, Randák said the problem is now more widespread and greater than when he was in the intelligence services which he left in 2007.