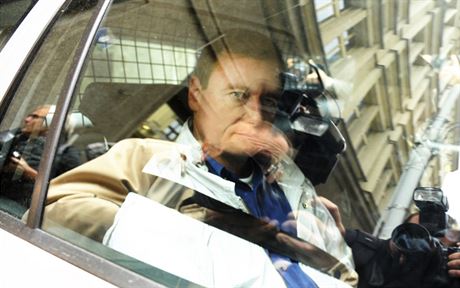 The dust is still settling and juicy details are still coming out about the investigation into the detention of former Social Democrat (ČSSD) minister and Central Bohemia regional governor David Rath, a current member of parliament who is suspected of taking a Kč 7 million bribe.

Even so, it is still worthwhile to speak with the former head of the Czech anti-corruption police (ÚOKFK), Petr Vincenz, about the background to the investigation, which appears to be the first to have caught a top politician red handed (and for this reason, parliamentary immunity does not apply). Vincenz, who was in at the start of the long-running investigation, repeatedly stressed during the interview the importance of the small, close-knit team that initially worked on the case.

Now working for power company Centropol Energy, he shared with Czech Position some of his experience and weighed up the contribution of compiling detailed documentation about the suspected corrupt machinations, the secrecy of the probe, and final swoop on top politician Rath that took place on Monday.

Q: What was unique about this case?

VINCENZ: It was the quality of the cooperation with the various service branches of the police force. Specifically it was the Unit for Special Actions (ÚZC) [who carry out wire taps and surveillance]. There was an enormous effort there, in the way that the criminal actions were documented and in the knowledge brought to bear by the police officers who took part in the investigation. There was a tremendous amount of work carried out by detectives without regard to their free time. They devoted Saturdays and Sundays to this and extra hours in the working week. People who did not have a special devotion to their work would not have been able to cope with that.

Q: Did you know from the start that you had the chance to reel in such a “big fish”?

VINCENZ: It was not like that at all. The state prosecutor transmitted the criminal complaint. There were some indications there, but there was nothing there regarding the person of Dr. Rath as you might understand it today. Uncovering the whole group is the result of quality operational work by the police team.

That is a close-knit group of four to six people who are representative of those who are simply accustomed to hard work and have a high level of expertise. These are not some sort of officers who put in the required hours and that’s it. These are not doing two questioning sessions a day and then packing up knowing that will be enough to satisfy the bosses. This is very time-consuming work, and no one can dispute that.

Q:  Did you keep tabs on all eight of the people detained since October?

VINCENZ: I would not say that it was like that for the final group. The information came in gradually, we evaluated it and afterwards we took a strategic decision on how the investigation should develop in the future.

Q: Everyone was surprised that information about the investigation did not leak out in advance, which is customary in the Czech Republic. How was that done?

VINCENZ: We had to keep very careful check on the information. The name of Dr. Rath was clearly very interesting — and it would also have been interesting if it had leaked out. Fortunately, that did not happen. Standard steps were taken in this regard. On the basis of my instructions, the details were not fed into the normal information system.

‘On the basis of my instructions, the details were not fed into the normal information system.’

Q: And how much was luck involved in this?

VINCENZ: It always has a fundamental role in complicated cases. Luck, however, is not enough; you have to go for it, as the sportsmen say. You get some indication that something has happened in a certain way. At that moment, you have to react like an archivist and call up all the documents and analyze them. The hope that you will detect some criminal behavior is pretty small. But this sort of work does pay off when you come face to face with such behavior. Then you can understand that something is happening or being prepared and you are onto it and can document it.

Q: A lot of people will just imagine a pile of paperwork…

VINCENZ: When you are dealing with a “real time” criminal act, so to speak, you have to follow certain precise steps. That relates to the use of operational and monitoring techniques, for instance recording phone links and following things and people.

Q: Why did the police detain Rath and the other suspects on Monday when the case had been on the go since October?

VINCENZ: That’s related to the evaluation of the situation surrounding the evidence obtained. According to me, the people working on the case were waiting for a sufficient weight of criminal evidence to be accumulated regarding the people in question. I don’t know if this was specifically the person of Rath. I cannot really comment, as I have been out of the force for two months and have become accustomed to civil life.

Q: What would be the biggest complication in the investigation of such corruption cases?

VINCENZ: Good results depend on the people involved. While  you can be guaranteed a certain technical level, the quality of the people can always be variable. In this case, you are dealing with skilled and quality people who are prepared to sweat it out in the desire to get results. Even so, they still need the right opportunities to crop up and above all some good luck.

As regards problems, I detected some deficiencies in the back-up services. Specifically this was the ÚZC. They were using equipment which according to me should have undergone a fundamental modernization and the section should have been strengthened as regards staffing. We had to constantly urge on our colleagues and keep the pressure on them in order to get them to deliver fast and quality work. Fortunately, I had the support of the deputies in the unit and the last of the Mohicans there who were prepared to work beyond the call of duty.

Q: Were you surprised by some personal aspects of the uncovering of form regional governor Rath’s criminal actions?

VINCENZ: I suppose it would be the marasmus of the individual when he was detained.

Q: What are you thinking about specifically?

VINCENZ: It is not really for me to present these things. I expect that further investigations, pressing of charges and the court proceedings will show this.

Q: And can the public expect any fresh revelations about this case which have still to come out?

VINCENZ: The most serious and basic information is already out there and is known by citizens.

Q: Did you know that the suspects might have been armed? [Rath reportedly had a pistol on him at the time of the arrest.]

VINCENZ: That can come out from widely available information. We knew who had permits to have weapons and in that case who had weapons. You can count on that in any sort of case.

Q: Can you imagine the accused being acquitted of any of the charges?

VINCENZ: If you want my personal opinion that is just an absurd conjecture.

Q: Were you under any kind of pressure, for example in the direction of the investigation, while it was ongoing?

VINCENZ: We cooperated with the supervisory state prosecutor of Ústí nad Labem who was very professional. There was no room, however, for the police to be influenced. It was taken that certain people did not know about this and secrecy was kept surrounding it.

Q: Are you now getting used to civilial life, and why didn’t you stay on to see this case through to the end?

VINCENZ: I received a very attractive offer from the company where I am now working. I had already said that my decision was influenced by some of the unsatisfactory background issues at the police, poor perspectives, and the not very idea direction in which the police presidium was taking. I had some hankering for quality leadership. It was to do with the police force making use of experienced people but who above all wanted to work. There are still a few experienced people left in the police. The question is how they can be motivated to carry out decent work. That’s how it seems to me now but I have made my decision.

Q: And what do you miss the most?

VINCENZ: I miss the most the opportunity to take part in such significant actions. It’s to do with the adrenalin and creativity. I also miss the cooperation with quality and reasonable colleagues. I use the term quality in the professional and personal contexts.

‘I think that there are a certain amount of people in the (ÚOKFK) who I think are not in the right places and are not performing  quality work.’

Q: How do you see the anti-corruption police developing in the future?

VINCENZ: I discussed such matters with police president Petr Lessy. I proposed that some certain problems be shifted from the section for uncovering corruption and financial crime (ÚOKFK) to the regional police directorates. From the units that remained a section dealing with serious anti-corruption and economic crime section would have been created. As part of the reorganization places within the section could be occupied from the start.

Q: Why such changes?

VINCENZ: Because I think that there are a certain number of people in the (ÚOKFK) who I think are not in the right places and are not performing  quality work. Often there is a lot of a certain type of camaraderie which I do not like. It was said of me that I was the mate of this or that person, but when you are just one part of the operation you have to get on with all sorts. You don’t find sensitive information in a sweetshop; you have to meet with some of the crooks.

Q: Would you back the creation of a special anti-corruption unit within the prosecution service and police?

VINCENZ: I have said before it’s not such much about the system as the people. If there were quality people at the Supreme Prosecutors Office in Prague (VSZ), they would do quality work. If we take the course of abolishing the supreme prosecution office and reorganizing the state prosecution service and creation of a special team of anti-corruption prosecutors because we don’t know what any other way to do it that’s fine.  The (ÚOKFK) needs to be reformed according to me. It should be started from the beginning and be staffed with people who have an active not passive approach and can unorthodox approaches because you are often working with unorthodox cases.