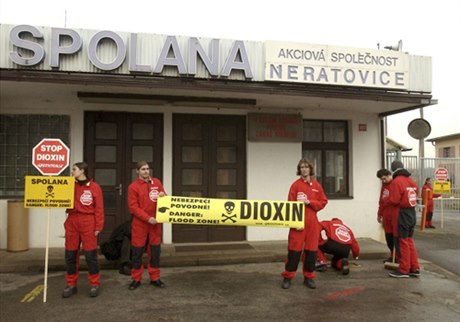 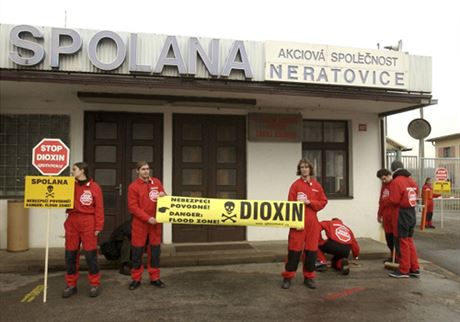 The grounds of the Czech chemicals producer Spolana, controlled by Polish concern PKN Orlen via its subsidiary Anwil, remain among the most contaminated sites in the entire Czech Republic, the local branch of environmental pressure group Greenpeace has said.

According to tests by Greenpeace, which last Monday began a 14-day project dubbed “Detox Tour 2011” to map the quality of the country’s rivers by taking sediment and water samples, unsafe quantities of mercury remain evident downstream of Spolana’s plant at Neratovice, about a half hour’s drive north of Prague.

Jan Freidinger, who heads Greenpeace’s anti-toxic campaign, told the Czech news agency ČTK that apart from high levels of mercury, the Spolana grounds — and thus the groundwater feeding into the Labe River (Elbe) which heads north into Germany — have dangerous substances like DDT, dioxins, polychlorinated biphenyls (PCBs), hexachlorobenzene (perchlorobenzene), toluene (a methylbenzene once known as toluol) and aliphatic hydrocarbons.

Spolana — once among the most contaminated sites in the world, as the factory produced the chlorine herbicide 2, 4 ,5-T, used for the preparation of the notorious defoliant Agent Orange — released 0.876 tonnes of harmful substances into Labe river basin in 2009, Integrated Pollution Register (IRZ) data published by the Czech environmental pressure group Arnika show.

By the end of the 1980s, the Labe River was ranked among the most polluted water courses in Europe. Since the river-protection organization International Commission for the Protection of the Elbe River (ICPER) was established in October 1990, the Czech Republic and Germany have been working together to improve the status of the Elbe and its catchment area. ‘Chlorine production [at Spolana] is still based on obsolete technology of amalgam electrolysis, which is the source of the toxic mercury leakage.’

The legacy of decades of environmental negligence continues to pose problems in the Czech Republic and for its downstream neighbors. “But the current problem at Spolana is not only due to old environmental burdens. The existing chlorine production is still based on obsolete technology of amalgam electrolysis, which is the source of the toxic mercury leakage,” Greenpeace’s Freidinger said.

Activists from the environmental pressure group are working together with technicians from two laboratories, the T.G.M. Research Institute for Water Management (VUV) and that of Monitoring s.r.o., an independent Czech company, which will publish the results of their findings in October.

The data will be compared with permissible levels for the toxic substances as well as to levels found in the Labe River eight years ago. Greenpeace expects to find high levels of chemicals from the production and use of chlorinated pesticides, hexachlorobenzene and mercury.

In 2003, Greepeace found a high concentration of PCBs in the Černinovsko nature reserve near Spolana, with dioxin concentrations in the reserve and in the Libris stream coming from Spolana exceeding by “several hundred times the values found in other places in the Elbe and in important industrial agglomerations.”

Dioxins originate in Spolana from several present and former processes, like for instance the production of pesticides, amalgam electrolysis for the production of chlorine, incineration of toxic wastes and the production of PVC. Eight years ago, analysis of fatty tissue samples from ducks and chicken eggs near Spolana, taken by Greenpeace, showed elevated concentrations of dioxins several times the EU limits. There is little evidence that eco-tender bidder Geosan has tackled the mercury problem at Spolana.

Since 2003, a number of buildings at the Spolana chemical plant have been closed and sealed to prevent the leakage of dioxins. Environmentalists are therefore now focusing on testing for mercury. There is little evidence to show that the company now overseeing part of the environmental detoxification process at the plant has tackled the problem.

According to the Labor Law, companies must inform employees about inherent risks at the workplace. A draft internal document June 2009 titled “Information about Risks at Spolana” warns chemical plant workers that the so-called SAE buildings there (B116 A,B; B1150; A1510), now under the care of Geosan Group — a bidder in the controversial Czech eco-tender to clean up much of the country's severe pollution legacy— are still highly contaminated with mercury.

“Risk analysis proves there exists a real health risk (mercury contamination). Also, the technical condition of the buildings long-term encasement in the case of entry brings a high risk of dangerous injury,” the document says.

The Lovochemie fertilizer producer (part of the Agrofert Group) and the Sokolovská uhelná coal miner were the biggest Czech polluters of the Elbe River in 2009, the Czech environmental pressure group Arnika said in January, citing information companies are required to submit to the official Integrated Pollution Register (IRZ). Arinka makes an annual ssessment of the Czech Republic’s biggest polluters based on the registry’s latest data.

According to Arnika, more than 18 tonnes of dangerous substances got in to the Elbe River and its tributaries (the Vltava, Saale, Havel, Mulde, Schwarze Elster, and Ohre rivers) in 2009. In order of frequency, these substances were zinc, arsenic, copper, chromium, nickel, cyanide, lead, cadmium and mercury.