Georges Kars: ‘All that counts is humanism’

From Impressionism to Fauvism and Cubism, Czech-Jewish artist George Kars put his brush to many styles before taking his life as WWII came to an end 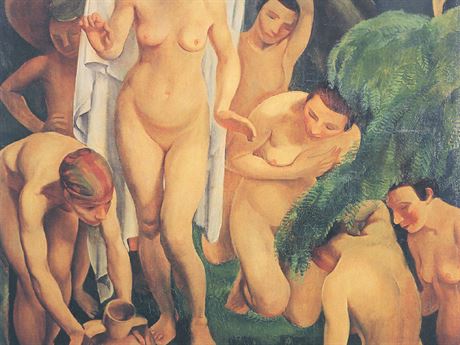 “Reality is at the bottom of an artist’s creative awareness; the work is then a magnificent synthesis of the subconscious and emotional excitement.” – Georges Kars

The somber reality of painter Kars’ work is now on display at the Robert Guttmann Gallery in Prague. The Czech-Jewish painter, born into a German family in 1880, spent many of his adult years working in Paris — and it was to France that he and his wife escaped right before the Nazi occupation of Czechoslovakia.

Kars committed suicide in February 1945, most likely after receiving news of the deaths of many family members and friends in both Prague and Paris. Along the way — though active in the resistance movement, and from 1936 basically on the run (from Spain to Paris, then to Prague, back to Paris, to Lyon, then to Switzerland) — he created some magnificent art, putting his brush to many styles.

“He is from the first generation of modern artists, which makes all his works, especially the early ones from 1905-1925, very interesting,” Arno Pařík, curator of the exhibition at the Robert Guttmann Gallery told Czech Position.

“We can follow the birth of modern art in his works: originally an Art Nouveau or symbolist artist, then an impressionist, he was influenced later in Paris by the fauvists, and then in relation with the cubist revolution. Then he spent four years in the first war on the Russian front and in captivity, and after the war he started a new development of his art.”

Prior to the war, Kars travelled often around Europe – following his art studies in Germany, he returned to work in Prague in 1905 and a few years later took off to visit France, Spain and Portugal. He eventually settled in Paris in 1908, immersing himself in the artistic life centered around Montmartre. While his work up till that time had primarily been influenced by the Impressionists and noticeable for its bright light and atmosphere, he soon fell under the spell of the Fauvists and Cubists and his paintings began to show a firmer structure.

Kars spent World War I in the Austrian Army, returning to Paris in 1919. A few years before the outbreak of World War II, he and his wife spent more time in Czechoslovakia, setting up an apartment and studio in Prague’s Vinohrady neighborhood.

He spent the end of the war years with his sister in Zurich, suffering both physically and mentally. Kars left about 150 works in that apartment when he fled from the Nazis. The work was confiscated and sold and, by the end of the war, his collection had disappeared. All that was later found were 53 paintings and nine sketches. His work is split between a few museums, but the majority of it is in private collections.

The pieces now on display at the Jewish Museum of Prague are from Kars’ early works; the newest painting is from 1922. The works are contemplative, landscapes restful. There are a number of portraits and the faces are surprisingly emotive and descriptive. Kars favored a mild color palate, but occasionally a brighter hue will appear and you wonder if Kars is trying to draw your attention to something. ‘It is very valuable exhibition with very fine paintings, probably the most valuable we have ever had in the Robert Guttmann Gallery.’

“We have two of his largest paintings: The cubistic Wrapping of Lemons from 1912 and Finding Moses from 1922, which is Kars’ largest neoclassical painting,” Pařík said. “On display you can find very important, and mostly unknown pictures, his very early works, then his impressionistic paintings, then the fauvists originated in Paris from 1908, and especially his most important works influenced by cubists, and after the war, his first neoclassical paintings.” Indeed, one of the best on display is his Still Life with Mask and Cello from 1914.

The exhibition is part of the museum’s cycle of on Jewish artists, especially ones from Prague or Bohemia, many of whom are quite unknown as their work had not been shown before 1989.

“It is very valuable exhibition with very fine paintings, probably the most valuable we have ever had in the Robert Guttmann Gallery,” Pařík said. “Pieces came from the Jewish Museum, Municipal museums in Velvary and Kralupy nad Vltavou, the National Gallery in Prague, the Golden Goose Gallery and several private collections.”

Drawing as a form of meditation

The gallery is small, and down the middle are boxes filled with his sketches. Some drawings are practically whimsical causing one to wonder if it is the painting that occasionally leads to a more somber vibe. Kars was quoted as saying: “I make a lot of drawings before I begin to paint anything. This is a form of meditation which has nothing in common with geometrization. All that counts is humanism; shape and color are only a means of finding yourself.”

With an excellent sense of proportion and the right amount of details, this is an exhibition which requires a bit of a pause at each painting as the specialness only becomes apparent after a few seconds of searching.

“Because the painters are Jewish, they were not exhibited so often,” Pařík said. “For years, we have been bringing and showing to the local and international population exhibitions of forgotten Jewish artists especially from the prewar times.”