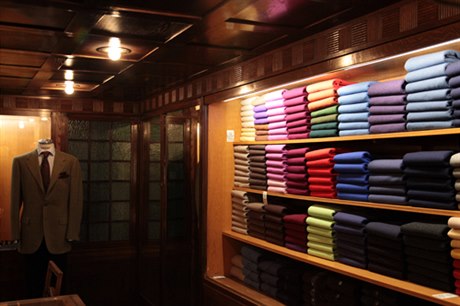 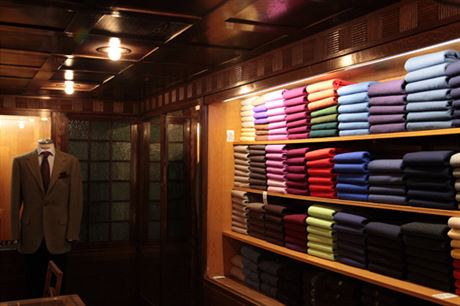 Wearing ties has never been a matter of fashion. The opposite is true. Tie-lovers often dress according to the latest trends to signal a certain contempt toward those who are not sure enough about themselves and do not have the courage to reach for something new. After all, eschewing the taste of the time requires a touch of sophistication. The first shopping zone in the Czech Republic exclusively focused on male customers has set the bar really high, considering that its logo depicts a bowtie.

Following a complete Kč 65 million renovation, the Rath Arcade, adjacent to the Myslbek Arcade, will offer demanding male customers everything that is pertinent to a good life style. “Caring for your image starts at the barbershop. Of course, one where they shave you in the traditional way – using a razor blade,” Chadima told Czech Position. In his opinion, a true gentleman cannot do without a tailor who would sew a made-to-measure suit and, naturally, must not forget to stop off at a shop with luxury accessories, where he can buy cuff links, a cigar case, an umbrella and many other essential items.

From the swim suit to a razor shave

The arcade will provide space for 22 shops with the area of between six and 155 sqm. Besides a Ralph Lauren outlet, offering the American Classics style, the Gentlemen’s Arcade will also house a Vilebrequin shop, selling swim suits in the style fashionable at the time when French Riviera beaches were frequented by Brigitte Bardot.

The barbershop will be operated by Toni & Guy (thus becoming a competitor to the currently one and only traditional barbershop in Prague, Thomas’s Barbershop, which was opened last year by Tomáš Kožíšek). Although the British hairdresser is primarily famous for its extravagant and ultramodern hair hairstyles, it should be pointed out that the Italian Mascolo family, which established the business some 50 years ago, originally owned a barbershop near Pompeii. A half-century later, Guiseppe & Gaetano became Toni & Guy, yet the staff are as skillful with the razor blade as their predecessors in the south of Italy.

Gourmets also should come into their own at the Gentlemen’s Arcade. The owner of Wine Food Market, Jiří Jelínek, will open a spacious Fancy Fastfood outlet. “Cheese from Piedmont farms, refreshing wines from Alto Adige or Tuscan Pecorino — Jelínek will offer fast food refreshments in a quality that we have yet to encounter in our country,” Chadima boasts.

The idea of focusing business on gentlemen could not have been better timed. Foreign magazines have been celebrating the renaissance of male fashion for several weeks now. According to several market analyses, sales of clothing for men have soared by up to 20 percent. Paradoxically, the main reason for this development has been the recession.

Professor Meir Statman of Santa Clara University in Silicon Valley claims that the global crisis has set in motion male competitiveness. “Today, clothing no longer serves men merely as a means for attracting women. They also use it as a tool for impressing their future employer or abashing a rival,” Statman said.

In his book “What Investors Really Want,” the professor dedicates an entire chapter to purchasing the right clothing. “In psychological terms, buying clothes is very satisfactory. You can express hope through your clothes. A new shirt can improve your mood. A new suit can boost your self-confidence, and new shoes may change your view of the world,” Statman states.

The textile industry, accustomed to promptly responding to market moods, reflected the new trend almost instantly. All over the world, gentlemen’s departments are being renewed in shopping centers, with the assortment of cashmere pullovers having extended and the demand for well-trained tailors long having exceeded the supply.

An arcade for men, however, is a novelty on an international scale too. “They do not have anything like this even in London, the capital city of male fashion. I consulted my intention with marketing specialists in England and France, and all of them forecast great success for the project,” Chadima says, adding that in his opinion the concept has a great chance of taking hold beyond the Czech Republic’s borders too.

When it comes to ties, the courageous man is afforded a unique opportunity to show his individuality and difference from the herd of tie-wearers. Yet if he does not know how to wear it, selects the wrong patterns and material, or is not able to knot it properly, he will easily become a laughing stock. The situation is similar to that with the Gentlemen’s Arcade. If the owners begin making compromises in the selection and quality of tenants, nothing but a good idea will be left — and just another shot in the dark.

Just as the wardrobe of a true gentleman cannot lack a made-to-measure suit, so the Gentlemen’s Arcade will not thrive without a really high-quality tailor. Yet Chadima is still seeking one. However, in the next few days he is setting off on a business trip to Vienna where the men’s tailor’s Knize resides. Will Schwarzenberg’s tailor return to Prague?