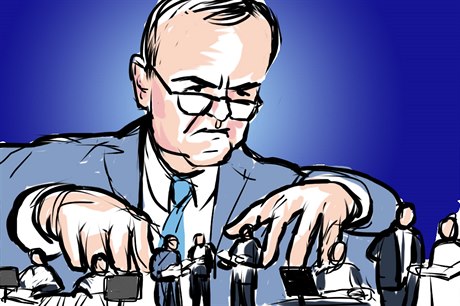 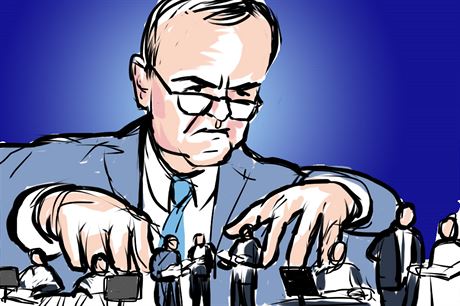 With billions of crowns in EU funding frozen, the Czech government is finally taking action. Finance Minister Miroslav Kalousek (TOP 09) is planning to gather all the auditors responsible for controlling EU grant expenditure from various regions and regional bodies into a single unit within his ministry. According to a number of sources, however, the Finance Ministry holds its fair share of responsibility flawed surveillance and misuse of EU funds.

It’s still unclear how European Commissioner for Regional Policy Johannes Hahn, who is in Prague on Thursday to discuss the problem of Czech drawing of EU funds, will react to Kalousek’s proposal. The Czech Republic has been given until June to put the problems right, otherwise the frozen funds will be withdrawn for good, which the minister has said would be a financial catastrophe.

Kalousek’s second initiative to unfreeze the flow of EU funds into the country comes with a revision of the law on financial controls, which dictates the procedures and processes of audits in Czech state institutions. The bill of amendments was put to the lower house of parliament last weeks and has passed its first of three readings.

Nevertheless, a number of members of the three party ruling coalition (ODS, TOP 09, Public Affairs (VV) have major reservations about the bill in its current form. MPs from the Civic Democrats (ODS) say they are worried that the finance minister wants to strengthen his political power not only through greater control by his ministry of EU funds, but also greater powers over expenditure of Czech government funds.

‘The bill only introduces cosmetic measures and doesn’t deal with the issue of independence of auditors’Critics of the bill oppose powers granted to state auditors being concentrated within Kalousek’s ministry, fearing they could be used for political ends. They suspect Kalousek wants to form a second Financial Audit Unit (FAÚ), the finance ministry’s anti-laundering and financial crimes watchdog. Such an arrangement, they say, would certainly not lead to greater independence of auditors, which is the declared aim of the bill.

The bill  was reportedly the cause of uproar at a meeting of the ODS’ group of MPs and Prime Minister Petr Nečas (ODS) had to promise his party colleagues that the cabinet will again debate the proposed amendments.

“The bill only introduces cosmetic measures and doesn’t deal with the issue of independence of auditors. Mayors have criticized the complexity of the system of controls whereby for one project several controls can take place, each of which costs a considerable amount, and complained to MPs. I’m glad the lower house has submitted the bill to the parliamentary control committee and extended the period of deliberation by 20 days,” former mayoress of Náchod and MP Zdeňka Horníková (ODS) told Czech Position.

In Horníková’s view, a better solution would be for the auditors to be under the direct control of the government in a special audit office outside the responsibility of a particular ministry and she says a whole new law, as opposed to amendments, is required.

The Ministry of Finance, however, claims the proposal to group EU funds auditors under the ministry came from the European Commission when deputy ministers of finance and regional development, Miroslav Matej and Daniel Braun paid a visit to Brussels. “The proposal that it should be namely under the control of the Finance Ministry was first put forward in March [2011]. We were surprised by it, and last November we discussed alternatives with the European Commission,” the Finance Ministry’s press department told Czech Position.

‘When a minister said ‘boo’ an auditor under the jurisdiction of that minister retreated and stopped probing. And this is not to Brussels’ liking’Czech Position asked several high placed state auditors and an auditor from the private sector about the situation and they all agreed that state auditors tasked with monitoring and improving the system of drawing EU funds by ministries and the regions are in a difficult position whereby they must obey their superiors.

“When a minister said ‘boo’ an auditor under the jurisdiction of that minister retreated and stopped probing. And this is not to Brussels’ liking,” a high-ranking official from the Ministry of Environment, who oversaw the allocation of tens of billions of crowns told Czech Position on condition of anonymity. He says that because of this, auditors only look for formal shortcomings and thus don’t uncover embezzlement of funds.

The official also explained how the process occurs in practice: “Once a builder came to me and said that he only does underground work. When I asked him why, he said because it’s not visible… Most EU money is spent on infrastructure projects and so-called ‘soft’ projects such as education programs. And as long as auditors don’t understand them and don’t take initiative, they don’t find anything.”

His account is backed by an auditor from a global advisory firm. According to international standards, the work of internal auditors of EU funds must be depoliticized and made fully independent. “The only proper solution is to leave audits of  EU funds to the internal audit departments of ministries.”

“However, the independence of those directors from the ministers must be strengthened,” the auditor who wished to remain anonymous, said, adding that if the government is considering centralizing controls of EU funds, it’s imperative they be under the control of the prime minister and on no account the Ministry of Finance, which, apparently, has failed in this area in the past.

Furthermore, the private sector auditor says that until an adequate solution is agreed upon and successfully implemented, the European Commission should send an ongoing audit mission to the Czech Republic to check the system’s functioning and quality of projects for at least a year.

An exchange in parliament between PM Nečas and deputy leader of the opposition Social Democrats (ČSSD) Lubomír Zaorálek last week illustrated the point succinctly. Nečas claimed that former finance minister and current ČSSD leader Bohuslav Sobotka is responsible for the existing problems because it was he who in 2006 and 2007 coordinated the system of audit activities with Brussels. Zaorálek countered that the PM was lying because, he said, the system was certified under the government of Mirek Topolánek (ODS).

So where’s the truth? In conversations with auditors, Czech Position found out that the Social Democrats started defining the audit system under the government of Jiří Paroubek (ČSSD), but under the ODS-led coalition including the Green Party (SZ) and Christian Democrats (KDÚ-ČSL) there was more room for defining the parameters of the system. First and foremost, however, it was necessary to agree with Brussels on the launch of the operational programs, of which there are 26, making controls of spending decidedly complicated.

Nevertheless, it was with Kalousek at the helm of the Finance Ministry that the current shape of the audit system was decided upon.

‘The Nečas government has still not come up with a solution, resulting in the suspension of certification for two structural funds’Kalousek who has overseen audits as of 2007 (albeit with a break during Jan Fischer’s caretaker government), claims that Brussels has only now come forward with complaints about the system, despite the fact it was the EU which originally approved the current system. But there’s another explanation as to why Kalousek did nothing to improve the system. “He didn’t pay attention to it. He was looking after the budget deficit and taxes. Brussels was a secondary issue for him,” a high-placed official in the Finance Ministry said on condition of anonymity.

Kalousek rejects all the criticisms that he bears at least part of the responsibility. “If I’m to draw some sort of comparison, then the finance ministry is responsible for the publication of a timetable, but it doesn’t have a chance to control what happens on the tracks. And now the [European] Commission is very skeptical about what the situation has come to on the tracks. It doesn’t believe the auditors of the individual programs, i.e. the regional councils and the ministries, and is insisting on the centralization of audits,” Kalousek told the server aktualne.cz last week.

When last spring Brussels sent a warning to the Ministry of Industry and Trade that all was not well with audits and certification for the business and innovation program and it could be blocked, the first attempts at rectifying the situation were launched by the government. A year later, however, and the Nečas government has still not come up with a solution, resulting in the suspension of certification for two structural funds.

Kalousek damaged audits of EU funds by appointing ex-defense minister Martin Barták (ODS) as his deputy in charge of controls of the public administration and audits of spending of EU fundsA portion of the blame also lies with the Ministry of Regional Development, headed by Kamil Jankovský (Public Affairs, VV), which is responsible for drawing billions from EU funds. Neither Jankovský nor his deputy for EU funds, Daniel Braun, managed to persuade the Finance Ministry that changes were needed fast.

But back to the Finance Ministry, according to Czech Position’s information, Kalousek damaged audits of EU funds by appointing ex-defense minister Martin Barták (ODS) as his deputy in charge of controls of the public administration and audits of spending of EU funds. When appointed, it was already expected that Barták would face corruption charges in connection with alleged soliciting of bribes over an order for Tatra transporter trucks for the army.

More importantly, Barták had no experience of controls of EU funds. And from March, 2011, when Barták stepped down because of the charges brought against him, no one took his place until Kalousek appointed Miroslav Matej to the post in August. At least Matej has relevant experience, having worked at the EU’s Court of Auditors in Luxembourg for five years.

Continuing the search for those responsible for audits of EU fund spending, one floor lower in the Finance Ministry we find Václav Štraser, the director of the Audit Department, the coordinating body for the ministry’s auditing tasks. The Czech media reports little about this organ. Nevertheless last year aktualne.cz reported that Štraser had been charged with verifying grants allocated to the Ústi nad Labem and Karlovy Vary regions, which Brussels froze due to corruption charges against former director of the Regional Council of the Severozapad Cohesion Region, Petr Kušnierz. Allegedly, Kušnierz demanded money in return for promises of receiving EU grant money.

But Štraser was also involved with the grants for northern and northwest Bohemia. As a member of the supervisory commission of the Severozapad (northwest) regional operational program, Štraser also played a role in setting the criteria for selecting projects supposedly worthy of EU funding.